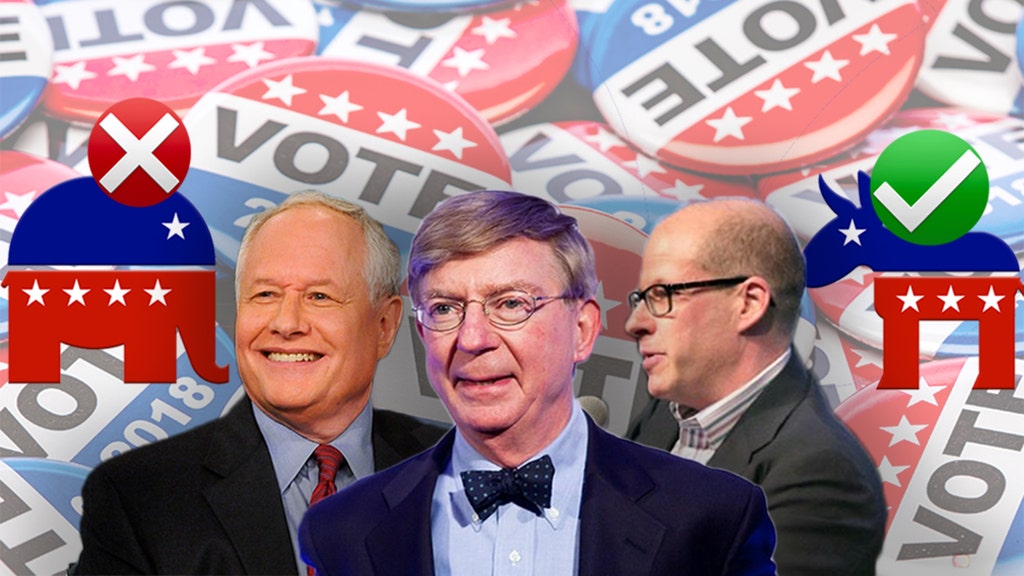 
The conservative commentators who absolutely despise President Trump are in a box.
During the campaign, many loudly proclaimed that they could never vote for Trump. But they said they didn't want Hillary Clinton to win either. So some opted for fringe candidates or third-party candidates or write-in candidates or told people to make up their own minds.
This was something of a charade. Either Trump or Clinton was going to be the next president. So by refusing to back Trump, they were increasing the chances that Hillary would win.
Now, with the midterms approaching, some of those on the right are taking the step that they refused to take in 2016: They are openly rooting for the Democrats.
This is how topsy-turvy our politics have become.
Here's the debate: Are these onetime Republicans so blinded by what I call Trump Trauma that they're running into the arms of the opposition party? Or is this a one-off, a temporary defection to restrain a president they think is damaging the country?
These people deserve to be taken seriously. But it doesn't invalidate their arguments to say that there are certain rewards in the media culture for conservatives who break with their side. Favorable publicity. MSNBC contracts. New respect from the left for their independence. (Flip the script for a moment and think about how the few Democratic pundits who broke with Barack Obama were denigrated or dismissed.)
Some big-name, anti-Trump conservatives, such as Bill Kristol, argue that it's better to stay and fight for a better GOP, which they define as veering away from the president's most controversial policies.
But for others, the Democrats that they've spent their lives battling suddenly look like they're worth dating, if not marrying.
The latest to jump ship is Max Boot, CNN analyst, Washington Post columnist and fellow at the Council on Foreign Relations.
Boot loses me with one of his first sentences, calling the Republicans "a white-nationalist party with a conservative fringe."
Seriously? The entire party?
"Personally, I've thrown up my hands in despair at the debased state of the GOP. I don't want to be identified with the party of the child-snatchers."
He says "a vote for egregious obstruction of justice, rampant conflicts of interest, the demonization of minorities, the debasement of political discourse, the alienation of America's allies, the end of free trade and the appeasement of dictators." And Boot says he'll be rooting for the Democrats to take over both houses in November because "like postwar Germany and Japan, the Republican Party must be destroyed before it can be rebuilt."
A World War II analogy? Conservative writer Ben Shapiro posted this rebuttal: "If you think today's Republican Party resembles Japanese fascism or Nazism, Trump has driven you utterly mad."(Boot says he doesn’t view the party as Nazis.)
Boot follows in the footsteps of syndicated columnist George Will, who recently declared:
"In today's GOP, which is the president's plaything, he is the mainstream. So, to vote against his party's cowering congressional caucuses is to affirm the nation’s honor while quarantining him. A Democratic-controlled Congress would be a basket of deplorables, but there would be enough Republicans to gum up the Senate's machinery, keeping the institution as peripheral as it has been under their control and asphyxiating mischief from a Democratic House."
So Will wants a Congress that stymies Trump by basically doing nothing. The former Fox News contributor now does his commentary for MSNBC.
Another major voice who has just left the Republican Party, to become an independent, is Steve Schmidt. I got to know him when he ran John McCain's 2008 campaign, and he is a man of fiery opinions. He regularly denounces Trump in moral, almost apocalyptic terms as an MSNBC commentator.
The Washington Post’s Dan Balz recently interviewed Schmidt:
"In a two-party system, he sees the Democrats as the lone hope to prevent an ultimate unraveling of democratic norms. 'The Democratic Party is called to be the sentinel of American democracy and liberty,' he said. 'It is beyond bone-chilling to consider what happens if that party fails in that task, in that duty.'"
There are other on-air conservatives who are fierce Trump critics. MSNBC's Joe Scarborough, the former GOP congressman, recently announced he had left the party. And Nicolle Wallace, the former Bush White House staffer and McCain campaign aide, constantly bashes the president on her MSNBC show. But neither has urged viewers to vote Democratic.
The problem for those who have is that they have spent their careers warning that the Democrats are the party of big government, reckless spending, overregulation, social engineering, identity politics and weak foreign policy. To suddenly root for the Dems means these pundits are effectively embracing that which they have always denounced.
They would argue that it is the Republicans who have abandoned them on core issues, from immigration to free trade to Russia, in service of the Trump world view. So they are using a lesser-of-two-evils approach in switching their support to the other party.
Even as these pundits argue that Trumpism is ruining the GOP, the president is enjoying record-high support among Republicans. Bottom line: They aren't bringing many voters along with them.
Source>http://www.foxnews.com/politics/2018/07/06/divorcing-trump-why-some-conservatives-are-now-pushing-democrats.html
Posted by theodore miraldi at 9:48 AM