PATH TO CITIZENSHIP?
As Each Day Passes we find out more information regarding Obama's True Loyalties...tmiraldi

The Obama administration granted citizenship to 2,500 Iranians, including family members of government officials, while negotiating the Iran nuclear deal, a senior cleric and member of parliament has claimed.
Hojjat al-Islam Mojtaba Zolnour, who is chairman of Iran’s parliamentary nuclear committee and a member of its national security and foreign affairs committee, made the allegations during an interview with the country’s Etemad newspaper, cited by the country’s Fars News agency.
He claimed it was done as a favor to senior Iranian officials linked to President Hassan Rouhani, and he alleged the move sparked a competition among Iranian officials over whose children would benefit from the scheme.

Several children of current and former Iranian officials live in the United States, including Ali Fereydoun, whose father Hossein Fereydoun (left) is the brother of and special aide to President Rouhani (right)  (Getty)
He claimed that the deal was made during negotiations for the Joint Comprehensive Plan of Action (JCPOA), which was reached in July 2015. President Trump announced in May that the U.S. would withdraw from the agreement.
OBAMA ADMINISTRATION ALLEGEDLY GAVE IRAN ACCESS TO US FINANCIAL SYSTEM
“When Obama, during the negotiations about the JCPOA, decided to do a favor to these men, he granted citizenship to 2,500 Iranians and some officials started a competition over whose children could be part of these 2,500 Iranians,” he claimed.
“If today these Iranians get deported from America, it will become clear who is complicit and sells the national interest like he is selling candies to America.”
The conservative Zolnour, who is in Ayatollah Ali Khamenei’s inner circle, added: “It should be stated exactly which children of which authorities live in the United States and have received citizenship or residency.”
SUPREME COURT TRUMP TRAVEL BAN DECISION IS AN IMPORTANT VICTORY FOR OUR NATIONAL SECURITY
He estimated that between 30 and 60 were studying in the U.S. while the rest of them were working in the country “against our national interests.”
Though Zolnour did not mention anyone by name during the interview, several children of current and former Iranian officials live in the United States, including Ali Fereydoun, whose father Hossein Fereydoun is the brother of and special aide to Rouhani; and Fatemeh Ardeshir Larijani, whose father Ali Larijani is speaker of parliament.
There is no suggestion either of these people received citizenship in the wake of the Iranian nuclear deal. It’s also unclear if Zolnour meant citizenship or a green card.
In 2015, 13,114 people born in Iran were issued green cards, while 13,298 were issued one in 2016, according to figures from the Department for Homeland Security. In 2015, 10,344 Iranians became naturalized, with a further 9,507 in 2016.
Asked about the cleric's claim, a State Department spokesperson said: “We’re not going to comment on every statement by an Iranian official.”
Fox News analyst and former Obama State Department spokeswoman Marie Harf was dubious of the Iranian official’s allegation. “This sounds like totally made up BS,” she said.
The Department of Homeland Security declined to comment. A representative for Obama Homeland Security Secretary Jeh Johnson also could not be reached for comment.
The cleric's claim could, in the U.S., fuel Republican complaints about the concessions made by the Obama administration during that period -- including not just sanctions relief, but the $1.7 billion payment supposedly tied to a legal settlement that coincided with the 2016 release of American prisoners.

Iran has been beset by economic protests in recent days; a group of protesters chant slogans at the old grand bazaar in Tehran on Monday  (AP)
And in Iran, they could fuel resentment toward Tehran's elite.
“Many ordinary Iranians are surprised and feel betrayed that children of the regime officials live and work in the U.S.,” Saeed Ghasseminejad, a research fellow at the Foundation for Defense of Democracies, a Washington-based research institute, told Fox News. “The regime officials chant death to America but send their children to the U.S., away from the hell they have created in Iran over the past four decades.” 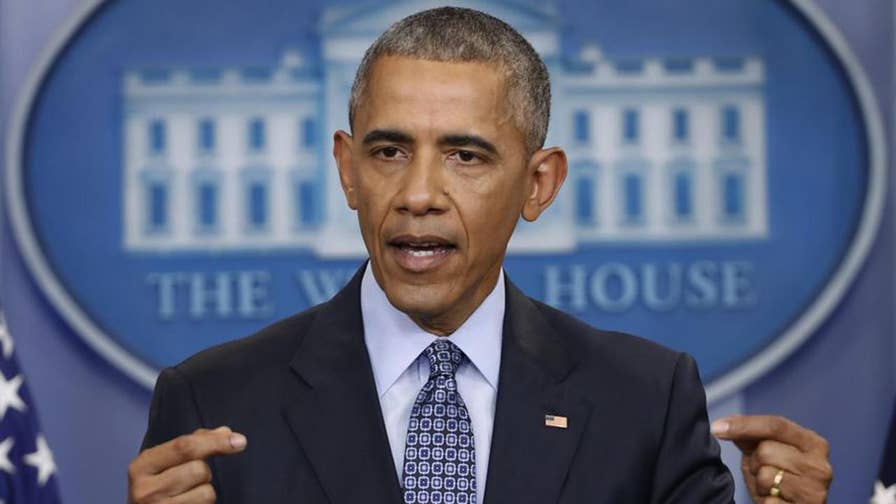 Ghasseminejad said some Iranians have called for their deportation from America: “Iranians don't understand why the U.S. government allows the offspring of the regime officials to live in the U.S., while the U.S. has introduced a travel ban for ordinary Iranian citizens and many Americans are imprisoned in Iran. That is why many Iranians on social media have been urging the U.S. government to deport the children of the regime officials.”
Iran is one of seven countries included in Trump's travel ban, upheld last week by the Supreme Court.
The country has been beset by a series of economic protests in recent days as the country’s currency, the rial, crashes.
Since the U.S. withdrew from the Iranian nuclear deal on May 8, the value of the rial has plunged to 90,000 against the dollar – double the government rate of 42,000 rials to the dollar.
The protests have hit Iranian commercial areas, including the historic Grand Bazaar in Tehran, the home of conservative merchants who backed the 1979 Islamic Revolution and overthrow of the Shah.
Rouhani has warned the country that it faces an “economic war” with the U.S., but analysts have warned that hard-liners are likely behind the protests seeking to challenge the more moderate president.
Rouhani is under pressure since the nuclear deal agreed with the Obama administration was torn up by Trump. As a result, international firms and oil companies have backed away from billion-dollar deals with the Islamic republic.
Source>http://www.foxnews.com/politics/2018/07/02/obama-administration-granted-citizenship-to-2500-iranians-during-nuclear-deal-iran-official.html
Posted by theodore miraldi at 2:41 PM