OpEd: STRZOK by Lightning of BIAS 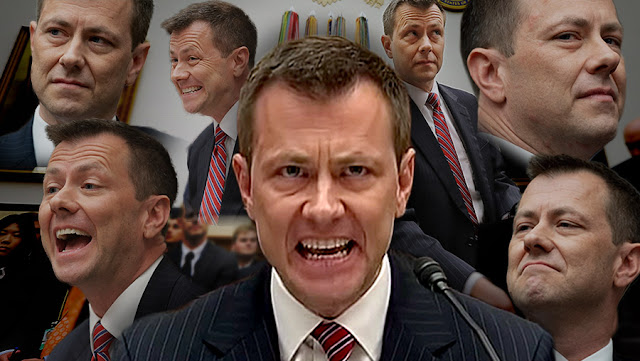 Bias by Peter Strozk is Insulting. The evidence is right there for anyone to see. Hillary Clinton was under an FBI Criminal Investigation, Strzok was the instrumental that set her free.

The Judge,  and Jury did a complete 180 Degree shift on all of the evidence. After proving her Wrongdoings, allowing her Aids and Attorneys to sit in on her interview where nothing she said was immortalized. What about the Immunity...for What?

We all know that the sole Intent of the Clinton Investigation was to give her a Summary Judgement at any cost. Like it or not, Peter Strzok was carrying water for the Democrat Party and Hillary.

My GOD, are you All Blind?

Mr. Strzok changed the final memo from a criminal Investigation to a slap on the wrist by changing the words from Grossly Negligent to Extremely Wreckless.

Gross Negligence is a CRIME. That's How MR. STRZOK used his BIAS!!!

Flushing hard evidence down the drain keeping Hillary Clinton in the Election, Peter Strzok and his Plaything Lisa Page were complicit in Obstructing Justice using the FBI as the bailiwick of their Illegal action.

His portrayal of himself as a Red Blooded American Patriot, and the Institution of the FBI's goodness is a guise we've seen by another disgraced employee...James Comey. How the FBI does no wrong, and stands for Freedom and Justice was for the American Public to hear. The content of his answers were shouted down by a chorus of Left Wing Demagogues who more and more resemble a Third World Audience. An audience with forked tongues and flawed concepts of truth.

What Strzok and Page did was worst than any other intrusion into our political process by any actors. These are people we are suppose to trust, after all they work for the FBI!

The lack of personal character by these two degenerate souls has showered the American Public with their unrepentant shame. All relationships in Life are built upon Trust. Maybe someone should ask their unsuspecting spouses what they think?

This is but the tip of the Corruption left behind by the former 'Corrupter & Chief' the maybe Christian, maybe Muslim socialist. Actions always speak louder than words!

Posted by theodore miraldi at 9:49 AM