Jon McNaughton's "Crossing the Swamp" is a riff on the classic "Washington Crossing the Delaware," but replacing George Washington's crew with members of President Trump's administration.  (Jon McNaughton, jonmcnaughton.com)


Maybe it's John Bolton clutching a gun. Maybe it's Mike Pompeo setting down his binoculars to stare into the distance. Maybe it's the gators.
But a newly unveiled painting meant to depict President Trump and his team navigating the Washington "swamp" has something for everyone.
Utah-based artist Jon McNaughton touched off a social media frenzy as he shared his painting, “Crossing the Swamp,” Tuesday on Twitter. The painting is a riff on the classic “Washington Crossing the Delaware,” only it replaces George Washington's crew with members of the Trump administration. 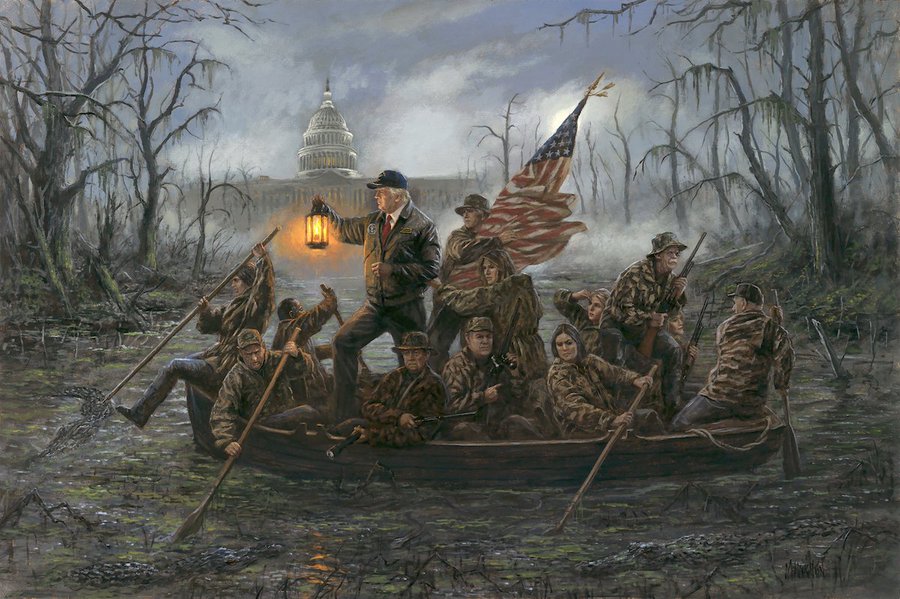 My new painting – “Crossing the Swamp”
“Never give up. Never lower your light.
Never stop till the swamp is dry.” – Jon McNaughton
For a list of figures in the boat: https://tinyurl.com/y8lvs3m2

Twitter Ads info and privacy
“My new painting—‘Crossing the Swamp’ ‘Never give up. Never lower your light. Never stop till the swamp is dry,’” McNaughton tweeted.
The painting shows Trump at the helm, and Vice President Pence carrying the flag by his side.
McNaughton identifies the rest as: U.S. Ambassador to the U.N. Nikki Haley; Defense Secretary Jim Mattis; Housing and Urban Development Secretary Ben Carson; Attorney General Jeff Sessions; first lady Melania Trump; Secretary of State Pompeo; White House Press Secretary Sarah Sanders; the president’s daughter Ivanka Trump; National Security Adviser Bolton; Kellyanne Conway; and Chief of Staff John Kelly.
McNaughton is a Trump supporter, hashtagging “MAGA” on his Twitter bio.
“Trump endeavors to cross the ‘swamp’ of Washington DC as he carries the light of truth, hope, and prosperity. The murky water of the deep state is laced with dangerous vermin, perfectly willing to destroy American prosperity for their personal ideologies and financial gain,” McNaughton said of his latest painting on his website.
McNaughton also wrote that he hopes people will “study the paintings and try to understand the deeper meaning.”
No matter how earnest the artist's intentions, the painting quickly became Twitter fodder as users seized on a variety of quirky aspects.
Observations included:
"Ben Carson appears to be rowing backwards."
"They are literally rowing in a circle."
"Pretty sure Pruitt took the cruise line route."
"Looks like Jr. didn’t make the boat."

My new painting – “Crossing the Swamp”
“Never give up. Never lower your light.
Never stop till the swamp is dry.” – Jon McNaughton
For a list of figures in the boat: https://tinyurl.com/y8lvs3m2  pic.twitter.com/CTPndvK5LM

Jon McNaughton@McNaughtonArt
My new painting – “Crossing the Swamp”
“Never give up. Never lower your light.
Never stop till the swamp is dry.” – Jon McNaughton
For a list of figures in the boat: https://tinyurl.com/y8lvs3m2

Twitter Ads info and privacy
Twitter can be cruel.
McNaughton has several other paintings on his website about the Trump administration. One, titled “Make America Safe,” depicts Trump standing in front of a white picket fence with an open lock, holding a key, and the American flag waving in the background.
Another, titled “Respect the Flag,” shows Trump on a football field, hugging a ripped flag, seemingly referencing the president’s battle with the National Football League over players kneeling during the National Anthem.
Source>http://www.foxnews.com/politics/2018/07/31/painting-trump-team-crossing-swamp-touches-off-social-media-frenzy.html
Posted by theodore miraldi at 6:50 PM