In the Insane World of Chuckie, Logic No Longer Occupies the Space Between His Ears...tmiraldi 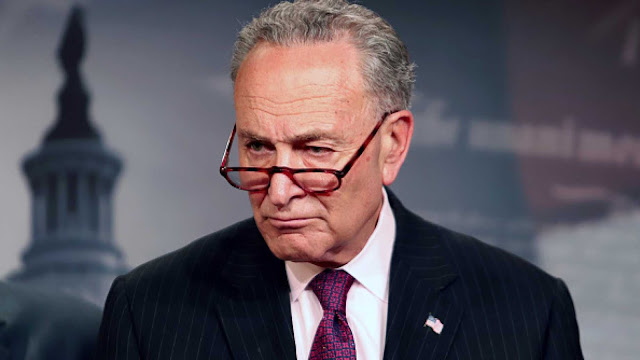 
Democratic Sen. Chuck Schumer said President Donald Trump nominated Brett Kavanaugh to the Supreme Court because he was “worried” about special counsel Robert Mueller’s probe and knew the judge would be a “barrier” to the investigation.
He noted that Senate Majority Leader Mitch McConnell advised Trump that there were other candidates on the 25-name list he was using to make his selection that could be more easily confirmed than Kavanaugh.
“Why did the president stick with Kavanaugh? Because he’s worried that Mr. Mueller will go to the court to ask the president be subpoenaed and ask to do other things necessary to move the investigation forward,” the Senate minority leader said during a news conference with Senate Democrats. “And President Trump knows that Kavanaugh will be a barrier to preventing that investigation from going there.”
He referred to Kavanaugh’s arguments that sitting presidents shouldn’t have to face criminal investigations because they are distracting and that a president doesn’t have to follow laws he deems unconstitutional.
“With this president who has had so little respect for the rule of law, who has shown he will roll over democratic norms, it’s no wonder he chose Judge Kavanaugh, whose views on this issue are more extreme that just about anybody on that list.”
Mueller is investigating Russian involvement in the 2016 presidential election and any possible collusion by members of Trump’s campaign.
Trump nominated Kavanaugh to replace retiring Justice Anthony Kennedy during a prime-time White House announcement Monday evening.
Source>https://nypost.com/2018/07/10/schumer-trump-picked-kavanaugh-for-protection-from-mueller/
Posted by theodore miraldi at 7:50 PM