This is how some new Immigrants Appreciate the Opportunities Hard Working Americans offer them. Ruining the 4th of July for Thousands of Others...tmiraldi 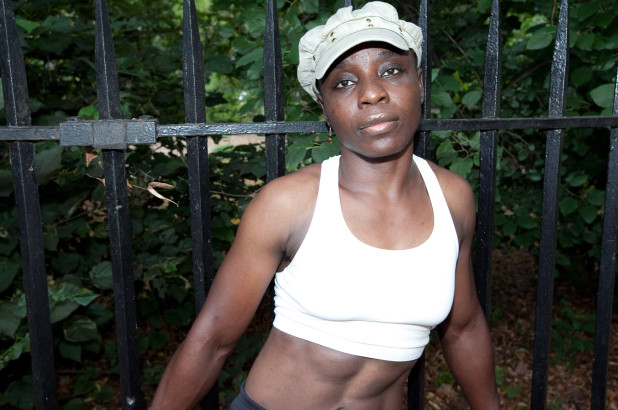 
The woman who scaled the Statue of Liberty on Wednesday has been identified.
Cops say Therese Patricia Okoumou — a 44-year-old immigrant from the Democratic Republic of the Congo — was the person responsible for the Fourth of July protest.
She lives in the St. George neighborhood of Staten Island and is currently in federal custody, according to police sources.
Officers from the NYPD’s Emergency Service Unittransported her to a federal detention center on Wednesday night following her three-hour standoff with authorities. Her case is being handled by prosecutors in the Southern District of New York.
Sources said that Okoumou told investigators that she climbed up to the feet of Lady Liberty to protest President Trump’s zero-tolerance policy on immigration and the separation of families at the border.
According to court records, she’s a Congolese immigrant who once filed a complaint with the New York City Commission on Human Rights — seeking a judicial review and reversal of a “determination” it made regarding alleged incidents of abuse that Okoumou suffered at the hands of a social services agency on Staten Island where she worked.

How cops rescued protester who climbed Statue of Liberty

Specifically, Okoumou claimed that in 2005 she was treated “in a demeaning manner” by her bosses and told that she would be fired “for complaining of discrimination.” It’s unclear why her complaint was tossed out.
In 2011, Okoumou made headlines after she was hit with an astounding 60 violations for illegally posting ads for her services as a personal trainer.
The Department of Sanitation slapped her with $4,500 in fines that year after she spent five hours one Sunday posting the fliers on Manhattan utility poles.
In 2017, she was arrested and charged with obstructing governmental administration, unlawful assembly and trespassing during a demonstration at the Department of Labor building on Varick Street. She had allegedly covered her mouth with tape and refused to respond to police demands.
On Wednesday, Okoumou told investigators that she was part of a group protest organized by Rise and Resist NYC. The activists unfurled a banner on Liberty Island less than an hour before her climb, which read: “ABOLISH ICE.”
Organizers initially tried distancing themselves from Okoumou’s Statue of Liberty stunt — saying she had “no connection” to their cause — but later admitted that she was part of the group.
Members described her on social media as a “total bad ass.”
“She’s very dedicated to the resistance generally, but specifically to the issues surrounding immigration and the treatment immigrants have been receiving from ICE and Customs and Border Control,” explained Jay Walker, a Rise and Resist activist “She’s been an active member for about four and five months.”
Walker told The Post that Okoumou helped plan the banner demonstration, but carried out the Statue of Liberty stunt on her own.
“She didn’t tell any of us about this plan,” he said. “We were all really shocked.”
The group had announced their Fourth of July stunt on social media moments before carrying it out Wednesday, but made no mention of the climb.
“We were all really taken back,” Walker said. “At first, we didn’t realize it was our fellow member. It wasn’t until we were able to see close up photos of her that we realized it was her.”
According to Walker, Rise and Resist has been working to ensure that Okoumou gets legal representation now that she’s in federal custody. He told The Post that she managed to make it up to the feet of Lady Liberty all on her own — without ropes or climbing gear.
“We came through all the security protocols that we needed to when getting onto the Liberty Island ferry,” Walker said, noting how Okoumou made it through the metal detectors.
“I guess she just had some hidden climbing skills that none of us knew about.”
Source>https://nypost.com/2018/07/04/statue-of-liberty-climber-identified-as-immigrant-activist/
Posted by theodore miraldi at 7:25 AM