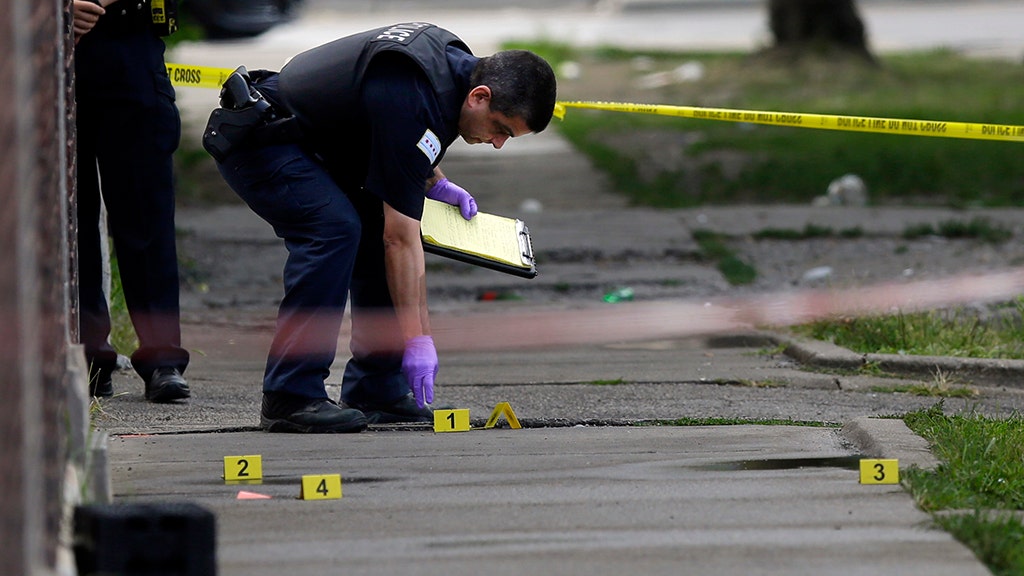 After an exceptionally violent weekend in Chicago that left nearly a dozen people dead, Mayor Rahm Emanuel's administration is among those being blamed for the outbreak.
About 70 people were hurt and 11 killed – ages 11 to 63 – over the weekend as gun violence erupted in Chicago. One teenager was shot while riding a bike; other shootings took place at a block party and funeral.
Emanuel’s challengers in his campaign for re-election have blamed him for an understaffed police force and a lack of investment in Chicago’s economically downtrodden neighborhoods. In turn, Emanuel encouraged people in neighborhoods where gun violence is most prevalent to “speak up.”
The violence has also raised questions, however, about the impact of gun laws. The city does not have the toughest gun laws in the country, as some have claimed. But Illinois is ranked eighth among states with the strongest gun laws by the Giffords Law Center to Prevent Gun Violence.
Read on for a look at some of the gun laws in Illinois and Chicago specifically.

To purchase a firearm in Illinois, one must obtain a Firearm Owners Identification (FOID) card.
To obtain a FOID card, one must be a legal citizen of the U.S. and have a valid driver’s license. The cards cost $10.
TWO MORE KILLED IN CHICAGO SHOOTINGS FOLLOWING BLOODY WEEKEND OF GUN VIOLENCE
FOID cards will not be issued to anyone who has been convicted of domestic battery, aggravated domestic battery or a similar offense. They also won’t be issued to anyone who has been a patient at a mental institution or treated for a mental illness in the past 5 years.

Illinois residents must be 21 to obtain a FOID card. However, individuals who are at least 18 years old can legally possess a firearm and ammunition with the written consent of an eligible parent or legal guardian.

Individuals at least 21 years of age – who have not been treated for alcohol or drug abuse or been convicted of a misdemeanor related to the use of physical force in the past five years – can apply for a concealed carry license.
MORE CHICAGO OFFICERS DEPLOYED TO AREAS AFFECTED BY GUN VIOLENCE
In order to apply, one must have at least 16 hours of concealed carry firearms training by a certified instructor with valid certification. The application fee is $150 for residents and $300 for non-residents.

Open carry is prohibited in the state of Illinois within city, village or incorporated town limits, according to the Giffords Law Center to Prevent Gun Violence. This does not apply to a person’s own land, home or business.
There are some exemptions to this ban, including for concealed carry holders who might have a partially exposed handgun, according to the nonprofit.

Gov. Bruce Rauner, a Republican, signed the state’s red flag law in July 2018. The law allows for police to temporarily seize firearms from someone deemed to be a danger to themselves or others.
HEAT’S ON IN RAHM’S RE-ELECTION RACE AFTER BLOODY WEEKEND OF GUN VIOLENCE
Family members or other individuals, such as a roommate, can seek a court order of protection for the confiscation of firearms.

In Chicago, gun stores, which are only allowed in designated areas in the city, must record on video the sales of firearms.
Individuals can also only purchase guns once every month.
Gun store employees also have to pass background checks and be trained on how to spot individuals who might be purchasing a gun for someone else.

It’s illegal to possess a silencer, according to the lobbying arm of the National Rifle Association.
Fox News’ Terace Garnier, Andrew O’Reilly and The Associated Press contributed to this report.
Source>http://www.foxnews.com/politics/2018/08/09/chicago-shootings-put-spotlight-on-illinois-gun-laws.html
Posted by theodore miraldi at 12:07 PM