A Democratic congressional candidate from New Mexico endorsed by former President Barack Obama has come out in favor of abolishing the Immigration and Customs Enforcement (ICE) agency in response to President Trump's immigration policies.
In an email to Fox News, Debra Haaland said she was "deeply troubled" by what she described as Trump's "efforts to dehumanize and hurt immigrants -- from caging small children to arresting parents outside of churches and banning people from our country based on their religion."
"I have called for abolishing ICE, because it is not living up to its mission," Haaland went on. "The violence and terror ICE promotes must stop, and we need to hold this out-of-control agency accountable."
Haaland, a former chairwoman of the Democratic Party of New Mexico, is one of 81 candidates whom Obama formally endorsed for public office Wednesday. In response, she tweeted: "Thank you so much President Obama! ... Your endorsement means [the] world to me."

Thank you so much President Obama! @BarackObama Your endorsement means to world to me.

Barack Obama
✔@BarackObama
Today I’m proud to endorse such a wide and impressive array of Democratic candidates – leaders as diverse, patriotic, and big-hearted as the America they’re running to represent: 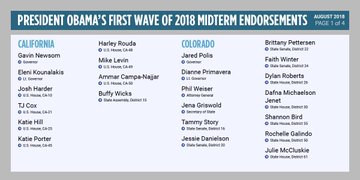 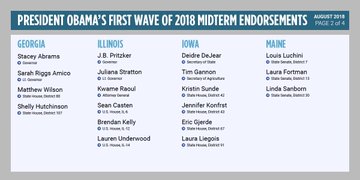 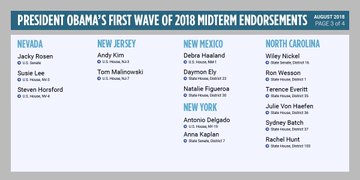 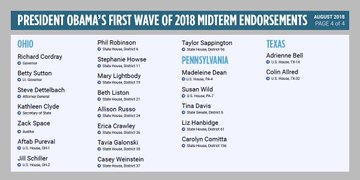 Twitter Ads info and privacy
If elected, Haaland would become the first Native American woman to serve in Congress.
In a statement announcing his endorsements, Obama said: "I’m confident that, together, they’ll strengthen this country we love by restoring opportunity that’s broadly shared, repairing our alliances and standing in the world, and upholding our fundamental commitment to justice, fairness, responsibility, and the rule of law."
The former president's office noted that some of the endorsements were given to "several promising Obama Administration and campaign alumni who heeded the President’s call in his farewell speech to 'grab a clipboard, get some signatures, and run for office yourself.'"
According to her campaign website, Haaland volunteered for Obama's first presidential campaign in 2008. Four years later, she was hired by his Organizing For America group as its Native American Vote Director.
Haaland is running to keep New Mexico's First Congressional District in Democratic hands. The incumbent, Michelle Lujan Grisham, is stepping down to run for governor.
Fox News' Alex Pfeiffer and Brooke Singman contributed to this report.
Source>http://www.foxnews.com/politics/2018/08/02/democratic-new-mexico-house-candidate-endorsed-by-obama-calls-for-abolition-ice.html
Posted by theodore miraldi at 7:50 PM