Seriously, did anyone think she would leave with Dignity and Grace. The Race Card is the Invisible, turn the table on those who have offended your entitlement.
...tmiraldi

Omarosa Manigault-Newman appeared on 'Meet the Press' on Sunday to promote her new memoir about her time in the Trump administration, which the White House has called untruthful.  (Reuters, File)

Omarosa Manigault-Newman, the ex-reality star and former Trump aide who has since acccused the president of racism, on Sunday released what she claimed was a secret recording of White House Chief of Staff John Kelly "threatening" her in the White House Situation Room.
But White House officials pushed back immediately, saying Manigault-Newman's termination for alleged ethical violations was handled appropriately and charging that she would have flagrantly violated security protocols by taping Kelly in the highly secured room in the basement of the West Wing.
“The very idea a staff member would sneak a recording device into the White House Situation Room, shows a blatant disregard for our national security – and then to brag about it on national television further proves the lack of character and integrity of this disgruntled former White House employee,” White House Press Secretary Sarah Sanders said on Sunday evening. 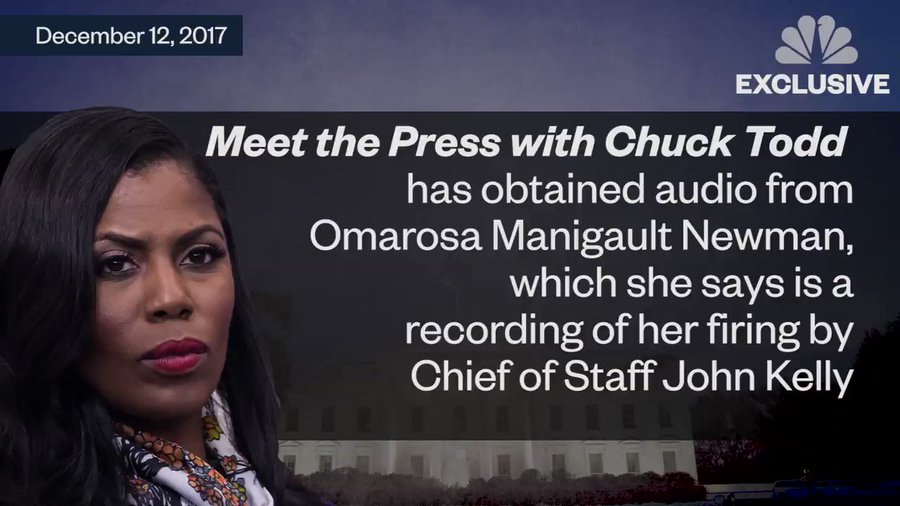 Omarosa: “Is the president aware of what’s going on?”

Twitter Ads info and privacy
In the recording, Kelly purportedly calls for Manigault-Newman's "friendly departure" from the administration without any "difficulty in the future relative to your reputation." According to the tape, Kelly continued by saying that things could get "ugly" for her, and that she was "open to some legal action" for conduct that would merit a court martial if she were in the military.
That comment was a "very obvious ... threat," Manigault-Newman told NBC's "Meet the Press." She said she had recorded the conversation because otherwise no one would believe her.
"We've got to talk to you about leaving the White House," Kelly apparently says in the tape. "It's come to my attention over the last few months that there's been some pretty, in my opinion, significant integrity issues related to you and the use of government vehicles and some other issues."
The possibility that Manigault-Newman had managed to record a conversation in the White House's high-tech Situation Room, which is the nerve center of sensitive government military operations, alarmed analysts Sunday.
"This is a HUGE security violation. HUGE," wrote Laura Rosenberger, the director of the Alliance for Securing Democracy and a former Hillary Clinton adviser, on Twitter. "Makes you wonder what other kinds of security breaches are occurring under this White House."
Others questioned why Kelly would have fired Manigault-Newman in the Situation Room, which is ordinarily reserved for national security matters. 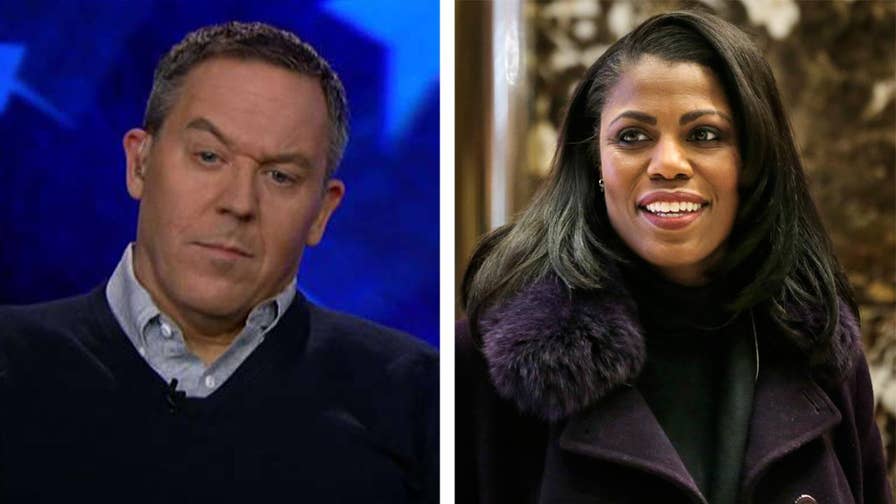 In January, shortly after Manigault-Newman's firing, the White House announced a new policy banning staff and guests in the West Wing from using personal cellphones, citing concerns about the "security and integrity" of White House "security systems."
OMAROSA USED 'STRICTLY FORBIDDEN' WHITE HOUSE CAR SERVICE FOR COMMUTE, REPORT SAYS
In the audio recording, when Manigault-Newman asks if Trump was aware of her pending termination, Kelly purportedly tells her that "this is a non-negotiable discussion" and that her firing was related to "pretty serious integrity violations."
Manigault-Newman on Sunday called on Kelly to publicly disclose her employee records to back up that claim.
"Release it so the American people will see that I worked my butt off for this country," she said.

Manigault-Newman, who campaigned for Trump and then took a job as director of communications for the White House Office of Public Liaison, left the White House in December 2017 after Kelly took over.
Just two years ago, Manigault-Newman was described by media reports as a "top Donald Trump cheerleader" because of her repeated, forceful defenses of the president. “I’m black, female and Donald Trump is my friend,” she wrote in The Hollywood Reporter in 2016.
“In my experiences with him, he has only been professional. I am aware of the perceptions. But he is open-minded: He does not judge people on their gender or race. He judges them on their ability to do the job."
Commenting on her repeated praise of President Trump when she worked in the White House, the former "Apprentice" star told host Chuck Todd on Sunday that "I was complicit" in what she characterized as his administration's efforts to "deceive this nation."
Manigault-Newman also produced on Sunday what she claimed was a stringent nondisclosure agreement she was asked to sign in exchange for taking a do-nothing job on Trump's re-election effort after her exit from the White House.
She also suggested that the administration routinely buys ex-officials' silence by connecting them with similar deals to work on Trump's re-election campaign, or with the RNC and other political groups. 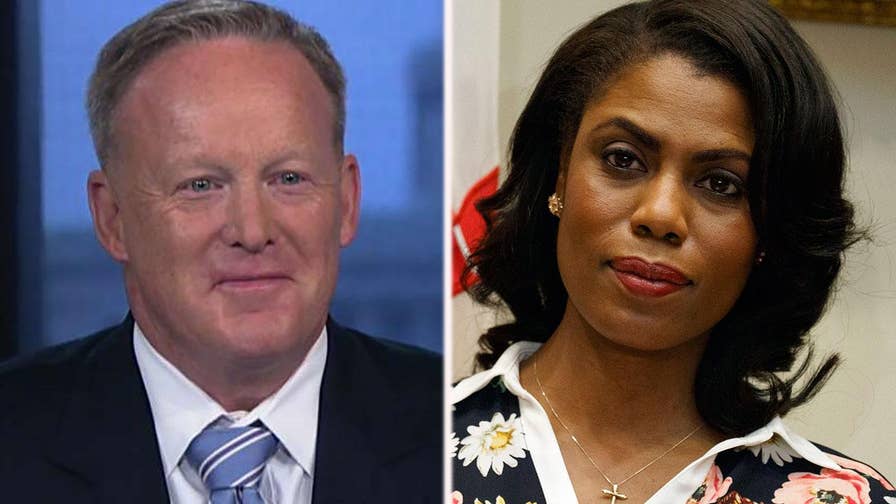 "They were not offering a real job," she said. "They told me if I work from home, if I even wanted to work. They didn't really care if I showed up. ... [This] is why Sean Spicer was describing Donald Trump as a unicorn jumping over rainbows," she added. "Because he signed the same agreement."
Speaking to Howard Kurtz on Fox News' "Media Buzz" on Sunday, Spicer shot back, saying Omarosa has no credibility and had broken critical protocols by making the audio recording in the Situation Room, calling it a "massive security violation."
He acknowledged that "everyone who worked on the [Trump] campaign and was part of it signed a nondisclosure agreement to begin with. ... It's nothing more than the procedure she had followed before, and clearly violated."
Manigault-Newman wrote a memoir out this week called "Unhinged" about her time in the Trump White House. According to excerpts in media outlets, Manigault-Newman questions Trump’s mental state and accuses him of using racial epithets.
The White House has strongly denied the book's allegations, calling Manigault-Newman "disgruntled" and saying the memoir is "full of lies."
On Sunday, Manigault-Newman admitted that "[Trump] has never said the n-word in my presence, ever," but she added that he talks about "everyone behind their back."
Days earlier, pollster Frank Luntz undercut one of Manigault-Newman's most incendiary claims about Trump, while also calling into question her sourcing in general.

I’m in @Omarosa’s book on page 149. She claims to have heard from someone who heard from me that I heard Trump use the N-word.

Not only is this flat-out false (I’ve never heard such a thing), but Omarosa didn’t even make an effort to call or email me to verify. Very shoddy work.

Twitter Ads info and privacy
WHITE HOUSE FIRES BACK AT BOOK'S CLAIM THAT TRUMP IS 'RACIST' AND 'BIGOT'
"I’m in @Omarosa’s book on page 149," he tweeted on Friday. "She claims to have heard from someone who heard from me that I heard Trump use the N-word. Not only is this flat-out false (I’ve never heard such a thing), but Omarosa didn’t even make an effort to call or email me to verify. Very shoddy work."
Speaking on "Fox News Sunday," top Trump adviser Kellyanne Conway suggested the president feels betrayed by Manigault-Newman's actions.
"Whether its thirty pieces of silver or a seven-figure book advance for you, your publicist, your ghost-writers and others, all that’s changed is this book deal and her being fired, so I think he probably feels very betrayed," Conway said.
That appeared to be the case over the weekend. Asked about his former supporter's new book at his golf course in Bedminster, N.J., on Saturday, Trump twice called Manigault-Newman a "lowlife."
After she was fired earlier this year, Manigault-Newman reportedly attempted to appeal to Trump directly in the White House residence, but accidentally tripped a Secret Service security wire.
Fox News' Jeffrey Rubin and Alex Pappas contributed to this report.
Source>http://www.foxnews.com/politics/2018/08/12/omarosa-releases-purported-secret-recording-chief-staff-john-kelly-threatening-her-in-situation-room.html
Posted by theodore miraldi at 8:41 AM