State Senate Candidate Julia SALAZAR Keeps MAKING UP Her PAST

Another Fraud Running for Office In the State of New York. Candidates Confused and Intellectually Challenged by Truth. Wonder WHY our Nation is Headed for a Major Attitude Adjustment?
...tmiraldi 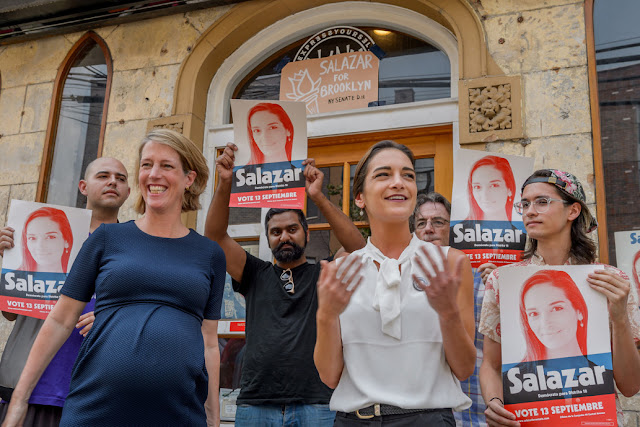 
Brooklyn state Senate candidate Julia Salazar needs to get her past straight — or at least stop contradicting her own accounts.
This much is certain: Salazar is an insurgent progressive in the mode of Rep.-to-be Alexandria Ocasio-Cortez, who along with Cynthia Nixon and Zephyr Teachout has endorsed her against incumbent state Sen. Martin Malave Dilan.
But her larger identity seems, well, self-created. Salazar has identified as Jewish for some years, and at least sometimes claimed to be an immigrant. In an interview with The Forward, she said she was born in Colombia and claimed Jewish blood via her father, with ancestors expelled as Jews from medieval Spain.
On her campaign Web site, she also self-described “as a proud immigrant.” But she has also admitted to reporters that she was born in Miami, though she spent much of her childhood in her dad’s native Colombia.
Meanwhile, Armin Rosen last week did a long dive into her past for Tablet magazine that indicates that a few years back she was claiming Jewish ancestry on her mother’s side.
It turns out that her late father was Catholic, while her mother attends services at an evangelical church in Brooklyn.
And Salazar herself was plainly a practicing Christian just six years ago — indeed, a right-wing, anti-abortion, pro-Israel evangelical Christian campus activist; a president of Columbia Right to Life who discussed Columbia professors’ anti-Israel bias on righty Glenn Beck’s show.
Her big turn came during an August 2012 visit to Israel with Christians United for Israel: She stayed on to visit the West Bank, and soon after her return to America had become a pro-Palestinian, anti-Zionist activist — while identifying as Jewish and even keeping kosher.
Her supporters accuse Rosen and Tablet of being malicious, sexist and racist for exposing Salazar’s contradiction. She herself tweeted Friday: “I don’t enjoy subjecting myself to Tabletesque race science.” But later that day she scrubbed her feed of the entire debate.
Lots of people turn left in college; many embrace a neglected heritage. But even in politics, it’s rare for someone to manufacture imaginary ancestry.
Source>https://nypost.com/2018/08/26/state-senate-candidate-julia-salazar-seems-to-keep-making-up-her-past/
Posted by theodore miraldi at 7:52 AM