‘Taking on Trump’ ISN'T the JOB of NY Attorney General

The Perfect Example of  POWER To STUPID! Petty People like this should by LAW never be allowed to Run for Office!
...tmiraldi 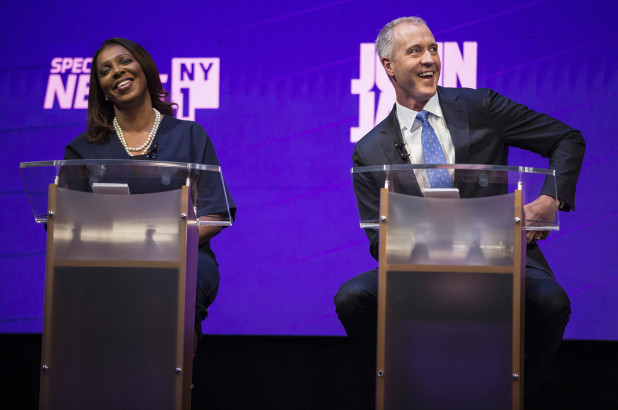 
In the race for New York attorney general, the four Democratic candidates have been adamant about using the power of the office, once elected, to attack President Trump. Public Advocate Letitia James says she is “closing in on him.” Rep. Sean Maloney wants to “take the fight” to Trump. Attorney Leecia Eve insists that fighting Trump is “Priority No. 1.” And perennial candidate and self-proclaimed expert on corruption Zephyr Teachout vows that she “will not wait to investigate” Trump.

Each envisions his or her role as attorney general as a kind of adjunct to special counsel Robert Mueller in the fight against the president. As Leecia Eve tweeted, “The NY State Attorney General is second only to Robert Mueller in terms of holding Donald Trump accountable.”

But there’s a crucial difference. Mueller was given a mandate to investigate alleged Russian interference with the 2016 election, and to determine if there was any collusion between Russian hackers and the Trump campaign. Other prosecutions are offshoots of the original investigation; at no point has Mueller announced he wants to “take on Trump,” as Teachout says in a YouTube campaign video.
The basis of the American legal system and rule of law is that prosecutors chase crimes, not people. This is the meaning of substantive due process of law, which protects citizens from abusive prosecution. The candidates for attorney general — and Zephyr Teachout in particular — have made it clear that they are not interested in facts, but that they intend to use the law to attack the president, his businesses and his business associates.
As Lavrenty Beria, Stalin’s top security officer, would say, they’ve picked the criminal, and they will choose the crimes to hang on him later.
Teachout has turned into an obsessive on the subject of Trump, whom she appears to hate. Even when asked about other issues, Teachout raises the subject of how to use the “unique powers” of the AG’s office to attack Trump.
“We need to investigate Donald Trump’s businesses, we have every reason to believe that there is illegality in his businesses,” she insisted in an interview with the online show “The Damage Report,” though what those illegalities are is not even alluded to.
In a campaign video, she explains, “Donald Trump’s businesses are based in New York; his foundation is based in New York; so the law enforcement authority that has the power to go after his power is the New York attorney general.”
But she’s not content just to go after Trump and his businesses, to subpoena them, raid their offices, seize their papers, and possibly arrest their staffers. Teachout promises to attack Trump’s family members and associates as well.
She says she wants to investigate the New York City real estate industry because it is “Trump’s source of power,” and she continually references the Kushner family and its companies as a particular target of her ire.
Teachout, along with James, is preoccupied with the so-called “double jeopardy loophole” that might prevent the state from prosecuting people whom Trump may pardon. “If Donald Trump pardons Manafort, the federal pardon would not cover state crimes,” she tweeted. “As AG of New York, I will investigate and pursue any state law violations to be ready for Trump trying to protect himself with a pardon.”
But Paul Manafort was found guilty of filing false tax returns and making false statements to banks. What harm did he do to the state of New York, and why would an attorney general vow to prosecute him, except as vengeance?
This is entirely inconsistent with the role of the responsible prosecutor in America. According to the American Bar Association, a prosecutor should “ensure that criminal investigations are not based upon partisan or other improper political or personal considerations.” Noted legal scholar and civil libertarian Harvey Silverglate describes Teachout’s avowed approach as “definitely Stalinist, and certainly un-American . . . to begin an investigation with the target already selected is, in my view, a form of corruption of the legal system.”
It’s ironic that we’ve already seen how a candidate’s statements on the campaign trail can affect the execution of their duties once they have won. Trump’s comments about Muslims and Mexicans have been cited by prosecutors, plaintiffs and even Supreme Court justices as evidence of “animus” on his part, and have been used to block his policies.
There’s no reason why future defendants in a Trump-related case brought by the next attorney general couldn’t point to these campaign pledges as a violation of due process, and as evidence of abusive prosecution, or why a judge might not dismiss such cases as biased and selective.
Whoever the next attorney general is should take caution that they don’t become the monster of tyranny they’ve pledged to destroy.
Source>https://nypost.com/2018/08/30/taking-on-trump-isnt-the-job-of-an-attorney-general/
Posted by theodore miraldi at 7:59 AM