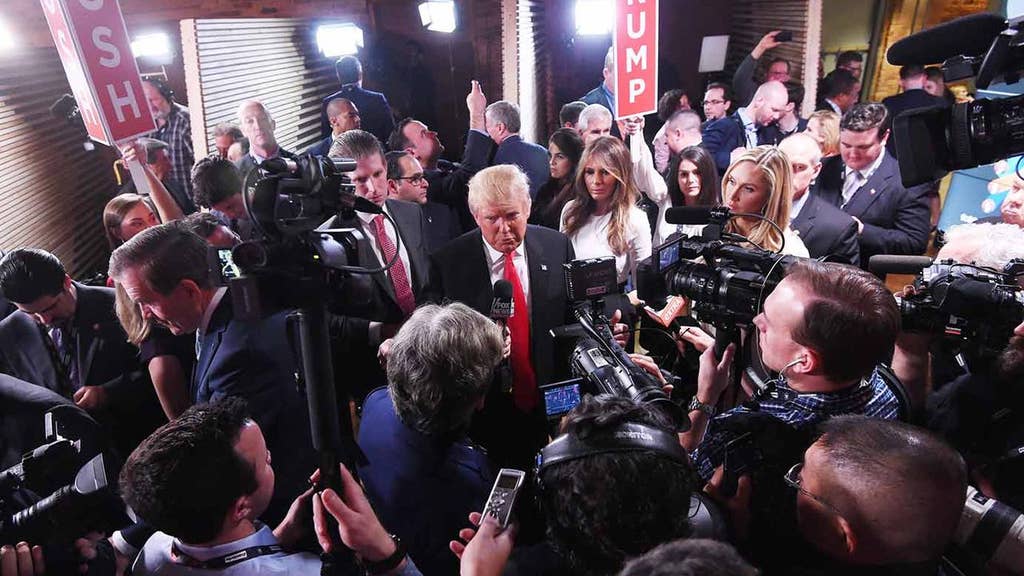 
The media didn’t even need Hillary Clinton this past week to denounce President Trump and his supporters as deplorables once more.
Trump supporters were depicted as “deranged” and being fed “venom” by the president “on an almost daily basis.”
Washington Post columnist and former Republican Jennifer Rubin said the president is “a desperate man,” “completely out of control” and “completely unhinged.”
The latest episode escalated when President Trump spoke to supporters at a rally in Tampa, Fla. CNN’s Chief White House Correspondent Jim Acosta, a constant Trump critic, was heckled by the crowd. Boos and chants of “CNN sucks” reverberated across the Internet.
Acosta even claimed he felt like “we weren’t in America anymore.” Apparently, CNN’s America only has free press, not free speech.
Journalists couldn’t decide who they were angrier at – President Trump or his supporters – so they went after both, with Acosta as their standard-bearer.
The ever-aggrieved CNN correspondent then took his complaints to the White House press room. There he hectored press secretary Sarah Sanders about President Trump’s view that many in the media are “the enemy of the people.”
Acosta noted how Sanders didn’t respond to a previous question the way he wanted. He whined that she “did not say that the press is not the enemy of the people.” This extended the life of the story and ensured Acosta was in the center ring for the circus that followed.
Is Acosta auditioning for his own CNN opinion show?
Fair to say that Acosta didn’t like Sanders’ response. Sanders listed numerous problems with the media and how they have raised the level of vitriol in the U.S. She added that, “as far as I know, I am the first press secretary in the history of the United States that’s required Secret Service protection.”

The Times might consider changing its motto from "All the news that's fit to print" to “Do as we say, not as we do.”

None of that mattered. Media reaction to being booed devolved into journalists defending journalists.
Politico writer Marc Caputo mocked the crowd at the president’s rally as having a “full set of teeth” only if you put them all together. He also called them “garbage people” before he had to apologize.
“Meet The Press” and MSNBC host Chuck Todd went off the deep end, comparing the crowd booing CNN to the deadly white supremacist attack in Charlottesville, Va.
“And this kind of unfocused visceral anger at the other side of really neutral people like folks in the press corps, it can lead to this,” he warned, before showing video of the attack that killed Heather Heyer in Chartlottesville.
“Really neutral.”
CNN political analyst April Ryan went so far as to claim that “Jim Acosta's life, in my opinion, was in jeopardy that night.” Even though Acosta was also asked for autographs at the event.
Meanwhile, “The View” panelist Sunny Hostin described President Trump as a “dictator.” “Dictators attack the press routinely and we’re seeing it in this country,” she said.
NBC Chief Foreign Affairs Correspondent Andrea Mitchell even went on Comedy Central and compared President Trump to Soviet dictator Josef Stalin for talking about the press as enemy of the people. “You know, this is something that we first heard from Josef Stalin,’ she said.
2. A Blatant Double Standard on Racism: The New York Times turned a blind eye to anti-white racism when it named tech writer Sarah Jeong, who was born in South Korea, to its editorial board. Controversy followed immediately when the Asian-American writer’s old tweets surfaced. Like a good liberal, she had blasted out numerous tweets attacking “white people.” Many of them had curse words in them directed at whites.
Jeong called to “#CancelWhitePeople,” asked if they are “only fit to live underground like groveling goblins” and referred to them as “Dumb--- f------- white people.”
In one tweet she commented: “White people have stopped breeding. you’ll all go extinct soon. that was my plan all along.”
Naturally, the Times stood by her, arguing that: “For a period of time she responded to that harassment (she said she was receiving online) by imitating the rhetoric of her harassers.”
Jeong referred to it as “counter-trolling.” Among the many other targets for her hate, she also attacked men, police (“a--holes” we should talk about “banning”) and people at the Times.
Andrew Sullivan skewered both Jeong and the Times, writing for New York magazine:“Another indicator that these statements might be racist comes from replacing the word ‘white’ with any other racial group. #cancelblackpeople probably wouldn’t fly at the New York Times, would it?” he asked.
Sullivan is right. The Times is obsessed with diversity. “Building a diverse and inclusive workplace is essential to that mission,” it claims on its official diversity page. According to Nexis, the newspaper used the word “diversity” 840 times this year in the first seven months. Only The Times isn’t diverse, a point the paper is desperate to hide.
Fast Company wrote in March: “The diversity of the New York Times’ leadership hasn’t budged in years.” In a nation where white people make up 60.7 percent of the population, they make up 72 percent of Times staff and 80 percent of its management.
The Times might consider changing its motto from "All the news that's fit to print" to “Do as we say, not as we do.”
3. That Free Speech Thing: The end of the week delivered a silly, pearl-clutching moment as professional journalists got upset over hats and T-shirts.
Journalism’s Poynter Institute reported that: “The Newseum is selling MAGA hats and 'fake news' T-shirts.” The press reacted like someone had violated hallowed ground, similar to how history buffs reacted to plans that Disney wanted to build a theme park near a Civil War battlefield.
Except this was about hats and T-shirts.
Journalists from outlets like PBS, CNN and The Washington Post did their best version of a Twitter outrage mob.
Boston Globe Deputy Washington Bureau Chief Matt Viser complained: “This t-shirt doesn’t belong anywhere. It particularly doesn’t belong at the @Newseum, a place that celebrates journalism and has the First Amendment etched in stone outside its building.”
Vice News Editor-in-Chief Ryan McCarthy snarked: “Looking forward to the Newseum's ‘Enemy of the people’ onesie.”
Washington Post journalist Karen Tumulty said: “Next up: Air and Space museum selling coffee mugs that say the moon landing was a hoax.”
And Washington Post Deputy Audience Editor Mark W. Smith responded like he was scolding a dog: “This is bad, Newseum.” Then he tried to sell followers some of the paper’s “Democracy Dies in Darkness” T-shirts. Because this is 2018.
CNN did extract a statement to toss to the mob from an unlucky Newseum spokespersonFriday: “Fake news is a word that is in our popular culture now and this is intended to be a ‘satirical rebuke’ and appears in our store with T-shirts that include a variety of other ‘tounge-in-cheek’ (sic) sayings.”
Of course the mob won soon after that. The cries of whiny journalists succeeded in banning speech that journalists didn’t like from the Newseum. (Irony alert!)
Here’s the official statement  from the Newseum (note the obvious anti-Trump dig at the end.): “The Newseum has removed the ‘You Are Very Fake News’ t-shirts from the gift shop and online. We made a mistake and we apologize. A free press is an essential part of our democracy and journalists are not the enemy of the people.”
Source>http://www.foxnews.com/opinion/2018/08/05/dan-gainor-insults-never-stop-anti-trump-media-just-can-t-help-themselves.html
Posted by theodore miraldi at 9:34 AM