President Trump kicked off the week with a battery of tweets aimed at Special Counsel Robert Mueller’s team, calling his investigators “Thugs” and accusing them of trying to tilt the midterms – ratcheting up his attacks amid speculation over White House Counsel Don McGahn’s cooperation with the probe.
The New York Times reported over the weekend that McGahn has cooperated extensively in the special counsel probe of Russian election meddling and potential collusion with Trump's 2016 campaign.
Trump has countered that he allowed McGahn and others on the White House staff to "fully cooperate" in a bid to show there was "no collusion" and "no obstruction." But the Times followed up with another report saying Trump’s lawyers do not know how much McGahn told investigators during months of interviews spanning 30 hours.
Trump referenced those interviews in his tweets Monday morning, accusing investigators of “looking for trouble” while maintaining that McGahn cooperated with his imprimatur.
“Disgraced and discredited Bob Mueller and his whole group of Angry Democrat Thugs spent over 30 hours with the White House Councel [sic], only with my approval, for purposes of transparency. Anybody needing that much time when they know there is no Russian Collusion is just someone … looking for trouble,” he wrote. “They are enjoying ruining people’s lives and REFUSE to look at the real corruption on the Democrat side - the lies, the firings, the deleted Emails and soooo much more! Mueller’s Angry Dems are looking to impact the election. They are a National Disgrace!”

Disgraced and discredited Bob Mueller and his whole group of Angry Democrat Thugs spent over 30 hours with the White House Councel, only with my approval, for purposes of transparency. Anybody needing that much time when they know there is no Russian Collusion is just someone....

....looking for trouble. They are enjoying ruining people’s lives and REFUSE to look at the real corruption on the Democrat side - the lies, the firings, the deleted Emails and soooo much more! Mueller’s Angry Dems are looking to impact the election. They are a National Disgrace!

Twitter Ads info and privacy
Trump went on to tweet that Mueller’s team is focusing on obstruction of justice after finding no collusion, claiming: “If you FIGHT BACK or say anything bad about the Rigged Witch Hunt, they scream Obstruction!”
According to the Times, specific incidents mentioned in their McGahn conversations included moments surrounding Trump’s decision to fire former FBI Director James Comey, and his reported preference that Attorney General Jeff Sessions oversee the investigation – all relevant to a potential obstruction case.
In a tweet Sunday, Trump also contrasted McGahn with John Dean, the White House counsel for Nixon during the Watergate scandal. Dean ultimately cooperated with prosecutors and helped bring down the Nixon presidency in 1974, though he served a prison term for obstruction of justice.
"The failing (at)nytimes wrote a Fake piece today implying that because White House Councel Don McGahn was giving hours of testimony to the Special Councel, he must be a John Dean type `RAT,"' Trump wrote.
Dean tweeted Sunday that he doubts the president has "ANY IDEA what McGahn has told Mueller. Also, Nixon knew I was meeting with prosecutors, b/c I told him. However, he didn't think I would tell them the truth!"
Dean later tweeted that Trump’s claims were “pure bluff” and Mueller got a “major break” with McGahn.

This is very clear from a close reading of the 1st Schmidt/Haberman story which was why I tweeted Trump had no clue about the testimony. Trump’s tweet suggesting he encouraged it — that was a pure bluff. Mueller got a major break (and witness) w/ McGahn! https://nyti.ms/2N4ST6Y?smid=nytcore-ios-share …

The lapse has contributed to a growing recognition that an early strategy of full cooperation with the inquiry was a potentially damaging mistake.
nytimes.com

Twitter Ads info and privacy
Trump's personal attorney, Rudy Giuliani, said in an appearance on NBC's "Meet the Press" that Trump didn't raise executive privilege or attorney-client privilege during those interviews because his team believed -- he says now, wrongly -- that fully participating would be the fastest way to bring the investigation to a close.
He also proclaimed Sunday that "truth isn't truth" while attempting to explain his reluctance to have Trump sit down for an interview with Mueller’s team.
"I am not going to be rushed into having him testify so that he gets trapped into perjury," Giuliani said on NBC News' "Meet the Press." "And when you tell me that, you know, he should testify because he's going to tell the truth and he shouldn't worry, well that's so silly because it's somebody's version of the truth. Not the truth." 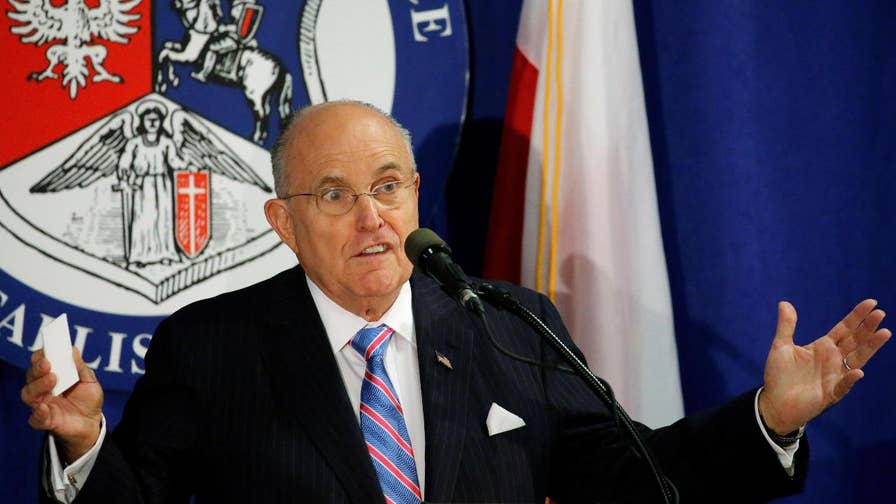 "Truth is truth," interrupted moderator Chuck Todd, to which Giuliani responded: "No, it isn’t truth. Truth isn’t truth."
While the comment drew some mockery on social media, Giuliani clarified on Twitter: “My statement was not meant as a pontification on moral theology but one referring to the situation where two people make precisely contradictory statements, the classic ‘he said, she said’ puzzle. Sometimes further inquiry can reveal the truth, other times it doesn’t.”
Fox News’ Elizabeth Zwirz and Samuel Chamberlain and The Associated Press contributed to this report.
Source>http://www.foxnews.com/politics/2018/08/20/trump-lashes-out-at-mueller-thugs-alleges-election-meddling-amid-mcgahn-speculation.html
Posted by theodore miraldi at 11:29 AM