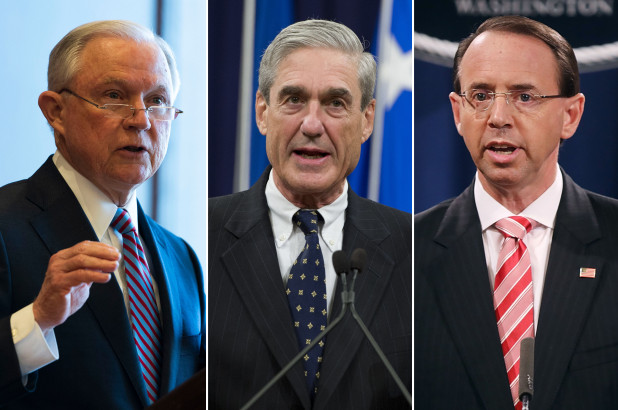 
You return from a great vacation and POW — reality hits like a punch in the nose. And that’s not counting the hassle of New York airports and traffic.
The pain begins when you remember that the hapless Jeff Sessions is still the attorney general of the United States. It sharpens with the realization that Rod Rosenstein, officially Sessions’ deputy but really the boss of the Justice Department and FBI, continues to get away with the biggest partisan heist of modern times.
Rosenstein is guilty of three main sins. One, he gives his spawn, special counsel Robert Mueller, virtually unlimited time, scope and budget to target anybody who worked for President Trump’s campaign or administration. As the ongoing trial of Paul Manafortillustrates, the tactic involves throwing the kitchen sink of charges with the aim of terrifying defendants so they will be more inclined to spill any possible beans on Trump in exchange for leniency.
The zealous approach — and exorbitant legal fees involved for defendants or witnesses — serve as deterrents for anyone who might consider public service. And although there is still no indication the president did anything wrong, the search for a crime to pin on him creates a cloud over everything he does and could influence the midterm elections.
Rosenstein’s second sin is his arrogant stiff-arming of congressional attempts to ferret out the facts about how the Trump probe actually started. It is a national disgrace that, 19 months after the president took the oath, the public is kept in the dark about the most basic things, including whether the FBI had any credible allegations about collusion, or whether it relied exclusively on the Hillary Clinton-financed Russian Dossier to get a surveillance warrant against Trump associate Carter Page.
We also don’t know how much money the FBI itself paid Christopher Steele, the former British spy who compiled the dossier, and why the agency continued to use Steele as a source after it fired him for leaking to the media.
Nor do we know why the FBI sent at least one spy — and maybe two — to snoop on the Trump campaign. Then there is the tsunami of leaks coming from law enforcement and intelligence agencies that were clearly designed first to defeat Trump, then to undermine him.
All these events are unprecedented, yet Rosenstein continues to thwart all efforts to explain them or hold anyone accountable. His imperious refusal suggests he sees himself and the Justice Department as above the laws it enforces on all other Americans.
Which brings us to his third sin — his complete lack of interest in the suspect handling of the Clinton email investigation. The numerous examples of misconduct and deviations from rules detailed in the inspector general report came and went as if they never happened.
That suggests it is the position of the Trump Justice Department that, despite all the agent bias, misconduct and unanswered questions, the decision not to prosecute Clinton is final and the case will not be reopened or even seriously reviewed.
The excessive secrecy and hyper-partisan taint have come at a huge cost in credibility, with a broad public perception that the FBI was guilty of bias in both the Clinton and Trump probes. A combined 62 percent of Americans believe the FBI wasn’t a straight shooter in the Clinton case, with 38 percent thinking the agency tried to help her, according to a Hill.TV poll, while 24 percent think the bias hurt Clinton.
Similarly, 59 percent saw FBI bias in the Trump investigation, with 38 percent believing the bureau worked against Trump, while 21 percent said it worked in his favor, according to the survey.
Leaving aside the polarization, the shared distrust of the­ nation’s ­premier law enforcement agency is the legacy of Barack Obama’s presidency and James Comey’s corrupt leadership. Unless Sessions and Rosenstein reverse course promptly, that distrust will keep growing and be their legacy as well.
Fortunately, there is one card left to play. It is Trump’s ace in the hole, and now is the time to put it on the table.
As I and others have noted, a president has almost unlimited powers to declassify any document within the executive branch. It is a mystery why Trump has hesitated to use that power, especially because he rails so frequently about the unfairness of both probes.
He could, in an instant, strike a blow for accountability and transparency by ordering the Justice Department to give Congress everything it wants, subject to very limited restrictions.
Embarrassment does not qualify as a reason for withholding information.
Almost certainly, the bias against Trump and in favor of Clinton would be glaring if the document troves were exposed to the disinfectant of sunshine. That would make the move a political bonus for Trump.
Even more important, it would set a dramatic precedent for a more open government, something Trump promised to deliver. Secrecy is an important part of the deep state’s permanent power and, when invoked to extremes by law enforcement, veers toward a police state. Trump should make sure he is its last victim.
Throw open the doors, Mr. President, and turn history’s page toward openness. Today would be a great day to start.

Ali Watkins and Sarah Jeong are destined to be best friends at the New York Times. After all, they represent the new era of double standards — or is it the era of no standards?
The Gray Lady must be in mourning over the editors’ decision to jettison conduct requirements for those of the favored gender and racial groups.
Watkins slept with a government source for most of her career and didn’t tell her editors her phone and computer records were seized during a federal investigation, yet keeps her job. And Jeong was hired by the editorial board despite a history of anti-white tweets.
If only this were Fake News.

Get ready for more racial bean counting and bureaucratic bloat from new Schools Chancellor Richard Carranza. He has hired, at the princely sum of $220,000 annually, a deputy for community empowerment, partnerships and communication.
Carranza said Hydra Mendoza, whom he worked with in San Francisco, “galvanized neighborhoods and communities to strive towards equity for all students.”
Once upon a time, communities galvanized themselves because they cared about children and schools. Now government does the galvanizing, but it can never care as much as parents should.

From the Associated Press:
CLEVELAND — Angels manager Mike Scioscia reached deep into his vocabulary to describe a report saying he’ll step down after this season.
“Poppycock,” Scioscia said Sunday, using a dated term for “nonsense.”
It’s just my hunch, but methinks the AP defined poppycock to avoid any suggestion of vulgarity. Chalk that up as another victory for the PC police — and ignorance.
Source>https://nypost.com/2018/08/07/why-its-time-for-trump-to-play-his-ace-in-the-hole/

Posted by theodore miraldi at 1:29 PM