11TH HOUR SHOCK! Two Say Kavanaugh May Have Been Mistaken For Them


As an extraordinary series of uncorroborated, lurid last-minute allegations threatens to derail his confirmation to the Supreme Court, nominee Brett Kavanaugh and Christine Ford, the California professor accusing him of sexually assaulting her more than three decades ago, are set to testify before the Senate Judiciary Committee Thursday morning.
The proceedings may be upended by late-breaking developments: In a statement released Wednesday evening, Judiciary Committee Republicans revealed that on Monday, they conducted their "first interview with a man who believes he, not Judge Kavanaugh, had the encounter with Dr. Ford in 1982 that is the basis of his [sic] complaint." They conducted a second interview the next day.
On Wednesday, Republicans said in the statement, they received a "more in-depth written statement from the man interviewed twice previously who believes he, not Judge Kavanuagh, had the encounter in question with Dr. Ford." GOP investigators also spoke on the phone with another man making a similar claim.
Ford has previously said there is "zero chance" she would have confused Kavanaugh for anyone else.
In response, an aide to Democrats on the Judiciary Committee reportedly unloaded on Senate Republicans: "Republicans are flailing," the aide said, according to NBC News. "They are desperately trying to muddy the waters. ... Twelve hours before the hearing they suggest two anonymous men claimed to have assaulted her. Democrats were never informed of these assertions in interviews, in violation of Senate rules."
The aide, before again calling for an FBI probe into Ford's accusations, added, "This is shameful and the height of irresponsibility."
But Sen. Orrin Hatch, R-Utah, shot back on Twitter late Wednesday, writing, "Some might find it exceedingly difficult to imagine Judiciary Committee Democrats expressing this complaint with straight faces."
Ford first brought her allegations to the attention of Sen. Dianne Feinstein, D-Calif., in July, but Feinstein didn't disclose the allegations to her Senate colleagues or federal authorities until days before a crucial Judiciary Committee vote on Kavanaugh's confirmation earlier this month. Republicans have accused Feinstein's office of compromising Ford's anonymity by sitting on the allegations until she could deploy them for maximum political gain.

Some might find it exceedingly difficult to imagine Judiciary Committee Democrats expressing this complaint with straight faces.https://twitter.com/seungminkim/status/1045157790950535169?s=21 …

Seung Min Kim
✔@seungminkim
Democrats, who have already been furious over the handling of the investigation of these allegations, had not been told of the following interviews by GOP until info was publicly released tonight, per senior Democratic official. Ds had asked for all relevant evidence 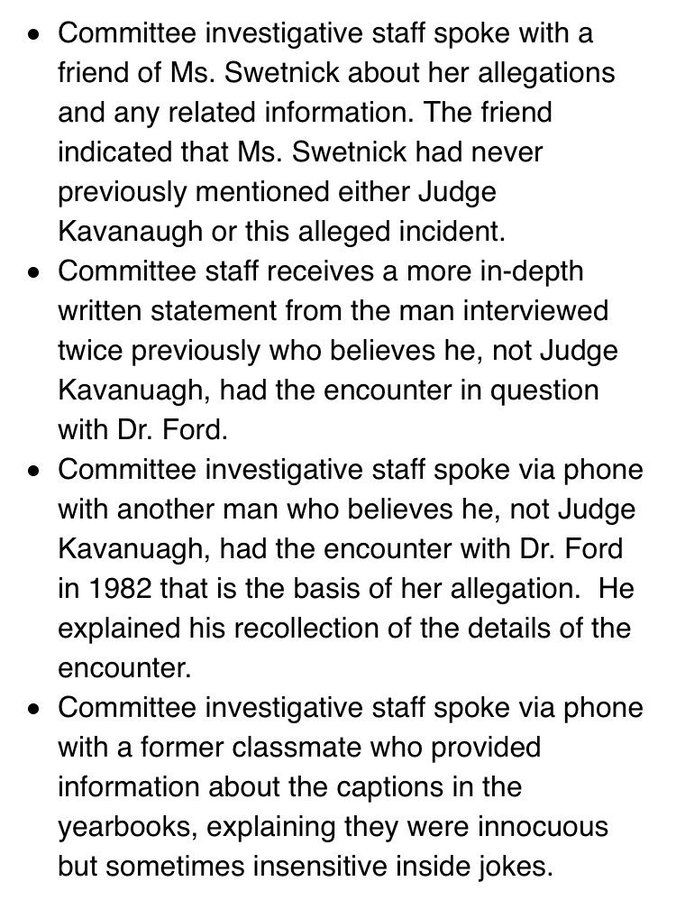 Twitter Ads info and privacy
The stakes for Kavanaugh could not be higher: Key swing-vote senators have said Thursday's hearing, which will begin at 10:00 a.m. ET, presents a pivotal opportunity to assess Ford's credibility and determine whether to advance Kavanaugh to the nation's highest court.
The hearing, which for days had been in doubt, will be a chance for the public to see Ford, in person, explain in detail what she claims happened at the Maryland house party in 1982 where Kavanaugh allegedly jumped on top of her and tried to muffle her screams -- and why she didn't tell anyone about the episode until 2012.
The proceedings will commence with opening statements from Judiciary Committee Chairman Chuck Grassley, R-Iowa, and ranking committee member Feinstein. After taking an oath, Ford will deliver the prepared remarks she has already provided publicly, according to a schedule provided by the committee. Each senator on the committee will then be afforded a single five-minute round of questions, with the opportunity to ask questions alternating between Democrats and Republicans.
Republicans have retained Rachel Mitchell, an experienced sex-crimes prosecutor, to handle some of their questioning, saying it will help avoid an overtly political atmosphere. Grassley has hammered Democrats, including Sen. Cory Booker, D-N.J., for "grandstanding" during the confirmation hearings earlier this month. 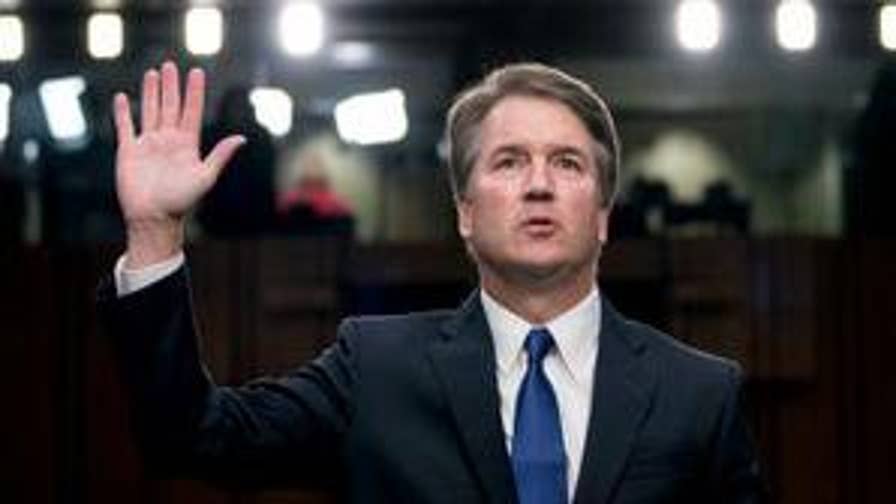 WATCH: CORY BOOKER COMPARES HIMSELF TO GLADIATOR 'SPARTACUS,' CLAIMS HE'S RISKING EXPULSION BY RELEASING CONFIDENTIAL KAVANAUGH DOCS
Democrats have indicated they intend to ask their own questions. After Ford's testimony is completed, the process will repeat for Kavanaugh.

In her prepared remarks, which Ford's attorney's released in advance on Wednesday, Ford will tell senators that she "thought that Brett [Kavanaugh] was accidentally going to kill me," and "I believed he was going to rape me."
She will explain that she remembers "four boys" being at the party, including one "whose name I cannot recall." The people she did name -- Kavanaugh and his classmates Mark Judge and P.J. Smyth -- have denied under penalty of felony knowing anything about the alleged episode. 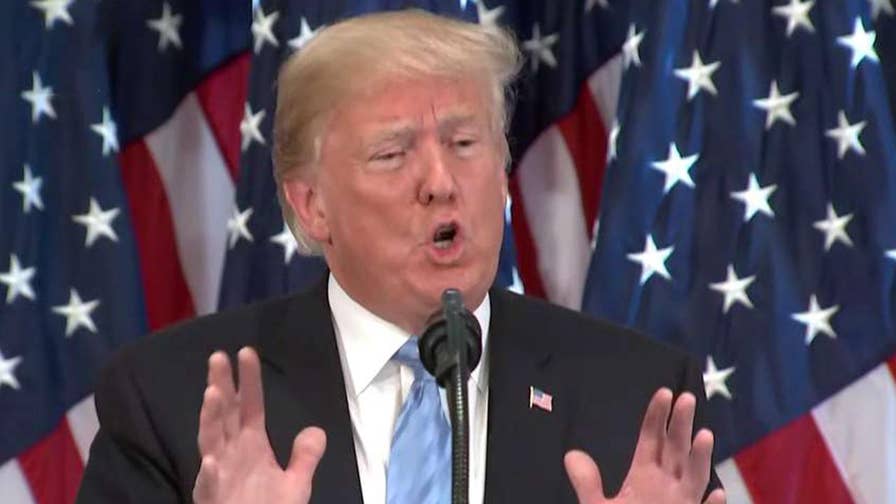 Ford will also describe one girl, "my friend Leland Ingham," as also in attendance. Ingham, in a previously released statement, has also denied knowing Kavanaugh or having information about the alleged assault.
POLYGRAPH REPORT REVEALS APPARENT INCONSISTENCIES IN FORD'S CLAIMS
Ford's letter to Feinstein in July, however, gave a different tally, saying that the gathering "included me and 4 others."
Additionally, in a handwritten statement she provided the former FBI agent who administered her polygraph exam in August, Ford wrote "there were 4 boys and a couple of girls" at the party -- again apparently contradicting her letter to Feinstein.
Republicans, through Mitchell, are expected to question Ford on the apparent discrepancies.
Ford is also expected to tell senators that she finally decided to disclose the alleged assault during a therapy session in 2012 because during a remodeling of her house that year, she insisted on installing a "second front door" -- leaving her husband and others wondering why.
Additionally, questions have surfaced concerning the credibility of some of Kavanaugh's other accusers, who will not be present Thursday because they have not responded to overtures from committee Republicans. 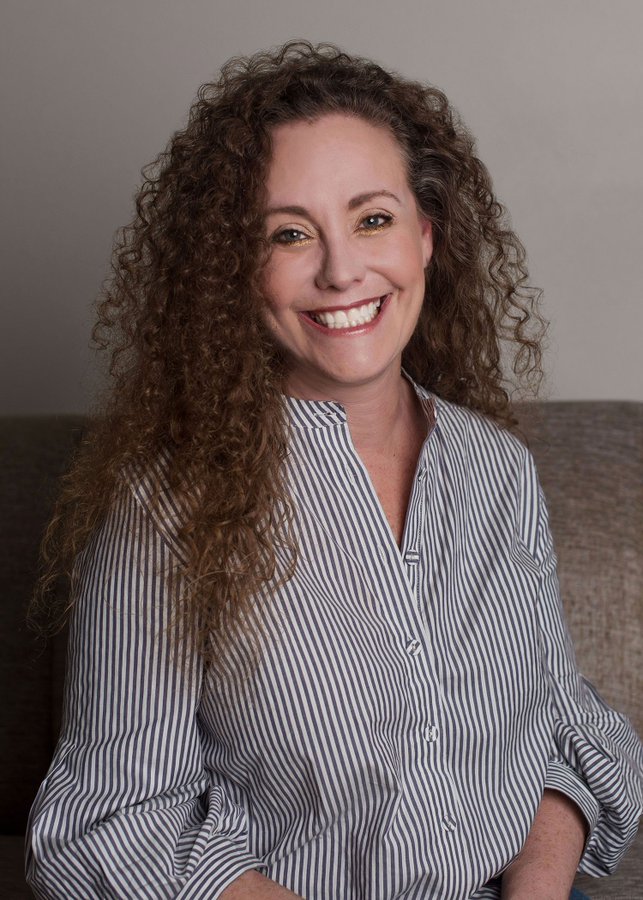 Here is a picture of my client Julie Swetnick. She is courageous, brave and honest. We ask that her privacy and that of her family be respected.

Twitter Ads info and privacy
For example, Julie Swetnick, who emerged Wednesday to accuse Kavanaugh of participating in "gang rapes" and rape "trains" in the 1980s, had a restraining order filed against her by an ex-boyfriend, Politico reported.
KAVANAUGH FIGHTS BACK, TELLS INVESTIGATORS ALLEGATIONS ARE A 'DISGRACE' THAT WILL KEEP GOOD PEOPLE OUT OF PUBLIC SERVICE
“Right after I broke up with her, she was threatening my family, threatening my wife and threatening to do harm to my baby at that time,” Richard Vinneccy told Politico. "I know a lot about her. ... She’s not credible at all. Not at all."
Swetnick is represented by anti-Trump lawyer Michael Avenatti, who has refused multiple requests by the Senate Judiciary Committee to interview her in the past week. On Wednesday afternoon, 60 men and women who attended Kavanaugh's high school or sister schools signed a letter saying they had never heard of Swetnick or anything like the overt, systemic gang raping that she described.
According to The Washington Post, both the state of Maryland and the federal government have filed since-resolved liens on her property in recent years for unpaid taxes totalling tens of thousands of dollars. It was not immediately clear exactly how Swetnick, who has held multiple security clearances relating to her work with the government, resolved both liens.
Republicans, including President Trump, have repeatedly pointed out that none of the sexual misconduct allegations against Kavanaugh has first-hand corroboration. In The New Yorker on Sunday, former Kavanaugh classmate Deborah Ramirez claimed that Kavanaugh had exposed his penis to her at a party decades ago, even as her close college friend denied ever hearing about the episode and suggested she was making the claim for political reasons. 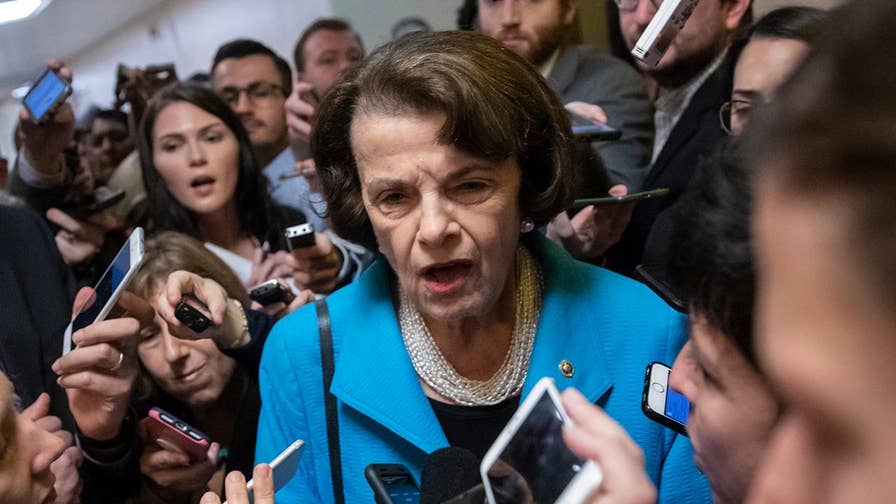 Ramirez, who also did not immediately respond to GOP Judiciary Committee inquiries, has acknowledged not being sure whether Kavanaugh had assaulted her until last week, after she spent days consulting with her attorney.
Several other allegations emerged this week. On Tuesday, a constituent told the office of Sen. Sheldon Whitehouse, D-R.I., that in 1985, two "heavily inebriated men" referred to as "Brett and Mark" had sexually assaulted a "close friend" on a boat.
The constituent, whose name was redacted in a document release by the Judiciary Committee but uncovered through tweets cited by the committee, recanted the claim Wednesday night on Twitter -- but several media outlets continued to report the allegations for hours afterwards.
In Twitter posts, the person making the accusation had also evidently advocated removing President Trump from the White House by means of military coup. On Wednesday, a post on the accuser's Twitter account read, "Do everyone who is going crazy about what I had said I have recanted because I have made a mistake and apologize for such mistake."
In a separate case, Kavanaugh was asked by GOP investigators this week specifically about a new claim in a letter received by Sen. Cory Gardner, R-Colo., from an anonymous individual apparently in Denver, alleging that Kavanaugh "shoved" someone up against a wall "very aggressively and sexually" during an outing in front of four witnesses in 1998. Gardner's office received the letter on Sept. 22.
"We're dealing with an anonymous letter about an anonymous person and an anonymous friend," Kavanaugh told committee investigators asking about the alleged episode. "It's ridiculous. Total Twilight Zone. And no, I've never done anything like that.
"It's bad -- it's doing damage to the Supreme Court," Kavanaugh added. "It's doing damage to the country. It's doing damage to this process. It's become a total feeding frenzy, you know? Every -- just unbelievable."
Source>http://www.foxnews.com/politics/2018/09/27/ahead-pivotal-senate-hearing-witnesses-surface-to-say-christine-ford-may-have-mistaken-them-for-kavanaugh.html
Posted by theodore miraldi at 7:45 AM