Just what our nation needs, Democrat Operatives working with our youth, calling for the Assassination of the President of the United States! The disrespect by Minority Communities for our
Institutions, Federal, State and Local Laws. Too many bottom feeders giving orders to those who have toiled to make this nation  safe and prosperous...tmiraldi 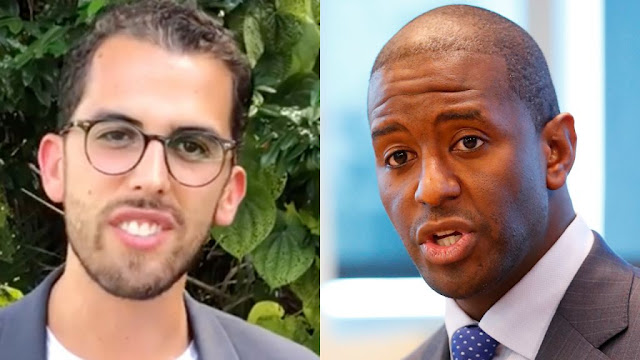 
A youth outreach staffer for Democratic Florida gubernatorial candidate Andrew Gillum has been terminated after calling for President Trump's death on Twitter, and wearing a shirt calling pro-Trump states "Dumbf--kistan."
The staffer, 24-year-old Manny Orozco-Ballestas, made a series of sexually graphic and politically charged comments on social media in 2012 and 2013, according to fringe blogger Jacob Engels, who flagged the posts.
In one 2013 post, Orozco-Ballestas wrote to Trump: "you need to be executed." In another, he reportedly wrote, "If you're weighing 300 pounds+ maybe it's a good idea you stop posting all that fattening food pics on [Instagram]!"
But it was one of Orozco-Ballestas' own Instagram posts last summer -- which was also unearthed last week by Engels and published by The Tampa Bay Times -- that led to calls by state Republicans for his termination.
In the post, Orozco-Ballestas is pictured wearing a shirt depicting a map of the United States, with red-colored states indicating ones that went for President Trump in the 2016 election.
On the shirt, a key provided below the map explains that the red states refer to "Dumbf---istan," while the blue refer to the "United States of America." 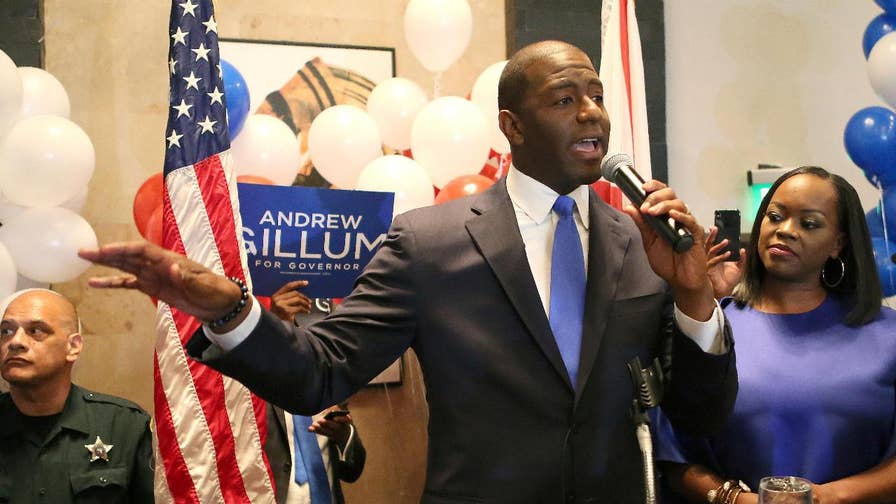 The Republican Party of Florida immediately called for Orozco-Ballestas' firing, saying the post was unconscionable.
WATCH: FLORIDA GOVERNOR'S RACE BETWEEN TRUMP-BACKED DESANTIS AND GILLUM HEATS UP
"It is unbelievable to me that Andrew Gillum would not only employ, but promote on social media, a person who calls voters 'dumb f*cks' for electing Republicans," Florida Republican Party Chairman Blaise Ingoglia wrote in a statement. "It is hypocritical for Gillum to endorse the same kind of hateful, intolerant speech that he likes to denounce."
At the time, a spokeswoman for Gillum told the Times they had addressed the explicit shirt with Orozco-Ballestas, who had been on the job for less than two weeks. The campaign added that they won’t "be lectured about words by the Party of Trump."
In a statement released Saturday, Orozco-Ballestas, who reportedly previously worked for Hillary Clinton's campaign, apologized.
“I am embarrassed, angry and disappointed in myself,” he said. “I took social media for granted when I was younger and I am now facing the consequences. ... What I tweeted as an immature student many years ago is not a reflection of the man I am today."
Gillum had denounced a remark his Republican opponent Ron DeSantis made last month after they each secured their party’s nominations in November’s election for warning voters not to “monkey this up” by voting for the Democrat, who is black.
A Quinnipiac Poll released Wednesday showed Gillum, who is running on a platform calling for expanding access to Medicare and raising the minimum wage, advancing to a 9-point lead over DeSantis, 54 percent to 45 percent.
Fox News' Stephen Sorace contributed to this report.