Former Vice President Joseph R. Biden assailed President Trump’s supporters during a speech Saturday at the annual Human Rights Campaign dinner in Washington, lamenting that “virulent people” and the “dregs of society” still had a friend in the White House.
Mr. Biden told an enthusiastic crowd of LGBTQ rights advocates that social conservatives at home and abroad who used religion or culture as a “license to discriminate” were committing a “crime” of prejudice.
“Despite losing in the courts and in the court of public opinion, these forces of intolerance remain determined to undermine and roll back the progress you all have made,” he argued. “This time they — not you — have an ally in the White House.
“They’re a small percentage of the American people, virulent people,” he continued. “Some of them the dregs of society. And instead of using the full might of the executive branch to secure justice, dignity [and] safety for all, the president uses the White House as a literal, literal bully pulpit, callously exerting his power over those who have little or none.”
Many conservatives on Twitter compared Mr. Biden’s remarks to Hillary Clinton calling Trump supporters “deplorables” during the 2016 presidential election.
Mr. Trump’s eldest son, Donald Trump Jr., said the former vice president’s statements went “too far.”

Donald Trump Jr. ✔@DonaldJTrumpJr
We are all used to Creepy Joe saying stupid stuff but this is too far even for him.
Paul Joseph Watson ✔@PrisonPlanet
Biden refers to Trump supporters as "dregs of society". This goes way beyond "deplorables". 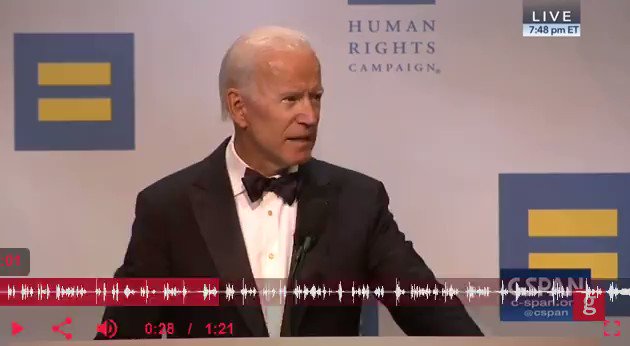