My Question to this New Accuser, GIVE US THE NAMES OF THE OTHERS THAT GANG RAPED YOU! Or is it ONLY Brett Kavanaugh you Conveniently Remember?
...tmiraldi 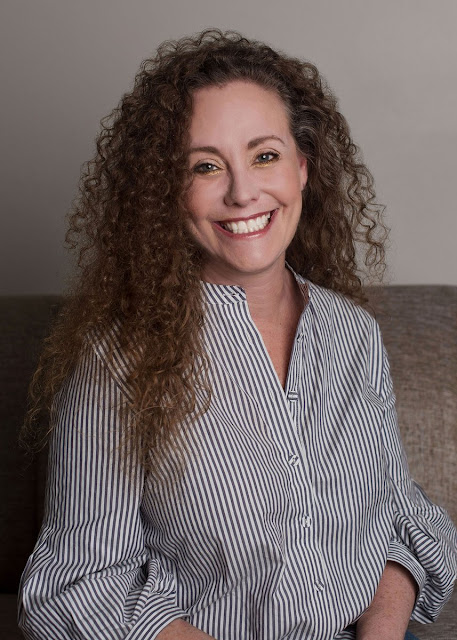 
Attorney Michael Avenatti, on the eve of Brett Kavanaugh's high-profile hearing to address sexual misconduct allegations, identified and released a "sworn declaration" from a woman who claims the Supreme Court nominee was involved in "gang" rapes in the early 1980s.
Avenatti’s client was identified as Julie Swetnick, who further claims in the statement that Kavanaugh and a friend were "present" when she became a "victim of one of these 'gang' or 'train' rapes" in 1982.
Kavanaugh issued a strong denial in response, saying in a statement: “This is ridiculous and from the Twilight Zone. I don’t know who this is and this never happened.”
Avenatti, who for days has vowed to release damaging information about Kavanaugh, posted the document a day before Kavanaugh and California professor Christine Blasey Ford are set to testify before the Senate Judiciary Committee about an alleged sexual assault while the two were in high school. 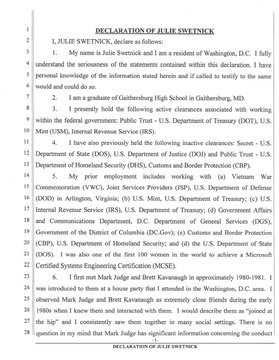 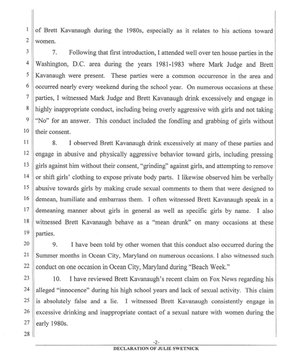 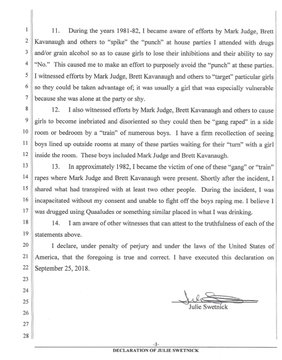 Below is my correspondence to Mr. Davis of moments ago, together with a sworn declaration from my client. We demand an immediate FBI investigation into the allegations. Under no circumstances should Brett Kavanaugh be confirmed absent a full and complete investigation.

Twitter Ads info and privacy
He also sent the statement to the committee on Wednesday, calling for the confirmation process again to be delayed.
Swetnick is the third woman to come forward with allegations of sexual misconduct against Kavanaugh that date back to his time at Georgetown Prep high school in Maryland and Yale University.
Taylor Foy, a spokesperson for Senate Judiciary Committee Chairman Chuck Grassley, told Fox News that lawyers for the committee are reviewing Swetnick’s declaration.
Grassley later told reporters his attorneys are contacting the individual. “Our lawyers are on it right now, our staff investigators. ... I can’t say anything until they get done,” he said.

Here is a picture of my client Julie Swetnick. She is courageous, brave and honest. We ask that her privacy and that of her family be respected.

Twitter Ads info and privacy
Fox News is told the Thursday hearing is still scheduled.
But the details immediately fueled Democratic calls to halt the process. "Republicans need to immediately suspend the proceedings related to Judge Kavanaugh’s nomination, and the president must order the FBI to reopen the background check investigation," Senate Democratic Leader Chuck Schumer said in a statement.
Kavanaugh previously has denied these allegations after Avenatti first revealed some of the details earlier this week. When asked Monday during a Fox News interview about the claim he and high school friend Mark Judge had plied women with drugs and alcohol at parties so other men could gang rape them, Kavanaugh called the accusation "totally false and outrageous" and said he never did "any such thing." 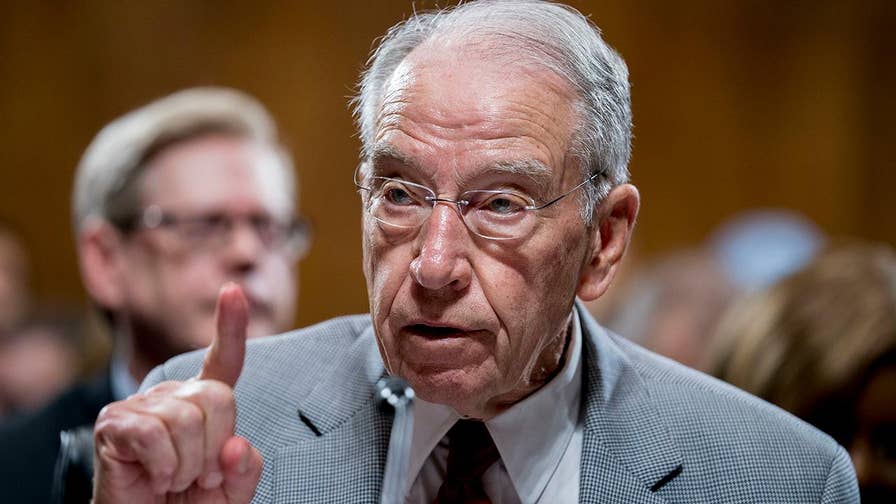 Swetnick does not explicitly accuse Kavanaugh of assaulting her but alleges he was involved in these "gang" rapes.
She claims in her declaration that Kavanugh was “verbally abusive toward girls,” was a “mean drunk” and would “spike” the “punch” at high school house parties so he and his friends could take advantage of girls. Swetnick adds that she remembers seeing Kavanaugh and other boys lined up outside a room at a party waiting for their “turn” with an inebriated girl.
“In approximately 1982, I became the victim of one of these ‘gang’ or ‘train’ rapes where Mark Judge and Brett Kavanaugh were present,” Swetnick says in her statement. “During the incident, I was incapacitated without my consent and unable to fight off the boys raping me. I believe I was drugged using Quaaludes or something similar placed in what I was drinking.”
Avenatti, who also represents porn star Stormy Daniels in her case against President Trump, had been under increasing pressure to make public the name of his client amid the allegations against Kavanaugh. Earlier in the week, an anonymous post by a user on the troll den site 4Chan claimed the woman did not actually exist, but was a hoax pulled on the attorney. Avenatti rejected the claim and, on Wednesday, came forward with the statement.
Avenatti said that Swetnick has had multiple security clearances from the U.S. government, including the State Department and Department of Justice.
He added there will be "many, many" corroborating witnesses to confirm the woman's account and that his client will submit to a lie detector test if Kavanaugh agrees to do the same. He also called for an FBI investigation of the woman's allegations.
“We demand an immediate FBI investigation into the allegations,” he tweeted. “Under no circumstances should Brett Kavanaugh be confirmed absent a full and complete investigation.”
Kavanaugh has repeatedly denied ever sexually assaulting anyone.
The Senate Judiciary Committee on Wednesday released Kavanaugh’s prepared testimony ahead of Thursday’s hearing. In it, Kavanaugh says he “never sexually assaulted anyone – not in high school, not in college, not ever.”
“Sexual assault is horrific,” he says. “It is morally wrong. It is illegal. It is contrary to my religious faith.”
Kavanaugh told Fox News in an interview broadcast Monday night that he has "always treated women with dignity and respect."
Kavanaugh added that he made the unusual decision to do a television interview before a Senate committee votes on his nomination because he wants to clear his name and said he is "looking for a fair process, a process where I can defend my integrity and clear my name. And all I'm asking for is fairness and that I'd be heard."
Fox News’ Mike Emanuel and Peter Doocy and The Associated Press contributed to this report.
Source>http://www.foxnews.com/politics/2018/09/26/avenatti-releases-graphic-kavanaugh-allegations-calls-for-new-delay.html
Posted by theodore miraldi at 1:05 PM