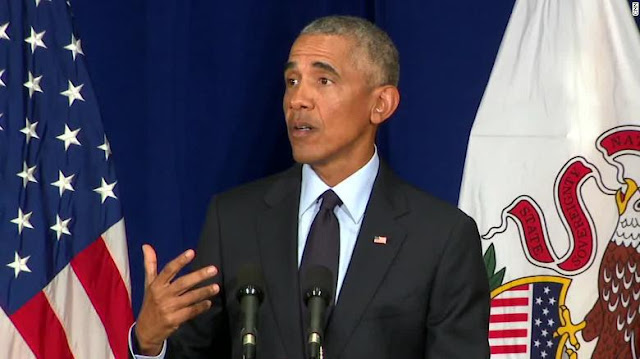 
Just in time to remind America why voters elected Donald Trump president two years ago, ex-President Barack Obama emerged from political exile last week.
Pompous, insufferable, self-enthralled, cliched and uninspiring, he picked up right where he left off.
Reliving his eight-year campaign that cost over 1,000 Democrat politicians their seats, Mr. Obama put on his psychiatrist cap and declared our current politics mentally unwell.
This November, he lectured, is “a chance to restore some sanity in our politics.”
And his history professor cap. The “arc of American history” blah blah blah blah. The whole class was fast asleep before he got to his point. Including President Trump.
He even donned his old commander-in-chief cap and tried some military talk.
“We’re going to put on our marching shoes,” Mr. Obama said. The crowd just stared up and blinked in confusion.
He said he had to break his silence in order to complain about Mr. Trump because things had become so “dire.”
He called Mr. Trump a “demagogue” and a “threat to our democracy.” Which is why, perhaps, Mr. Obama’s administration deployed America’s entire espionage apparatus to spy against the Trump campaign at the height of the 2016 election.
“If we don’t step up, things can get worse,” Mr. Obama said.
So, he was stepping up.
Either that or Mr. Obama had heard a Red Heifer had been born at the Temple of Israel last week and assumed that was his signal to return. Time for the Second Coming of Obama.
Actually, his return to the political stage sounded more like somebody had fed a really terrible high-school term paper into Mr. Obama’s trusty old teleprompters.
Also, he was sick and tired of hearing all these economists and financial experts talking about how great the Trump economy is doing. So he delivered a speech and declared that Mr. Trump’s excellent economy was actually a result of Mr. Obama’s eight-year assault on industry, small businesses, corporations, taxpayers and health care.
Mr. Obama’s re-emergence comes after a truly remarkable week — in addition to the birth of a Red Heifer in Israel.
Legendary swamp man Bob Woodward — jealous over the star treatment Omarosa Manigault Newman got over her kiss-and-tell book — responded with a kiss-and-tell book of his own. Only, Mr. Woodward failed to get the access inside the White House that she achieved.
In time, perhaps, Mr. Woodward might develop Ms. Manigault Newman’s level of reporting chops.
Anyway, the books were remarkably similar in their obsession with palace intrigue — and nothing else.
Mr. Obama’s return to the swamp also follows an anonymous opinion article in The New York Times confirming the existence of a “Deep State” aimed at thwarting the will of American voters from inside the White House.
Meanwhile, Mr. Trump remains focused on stoking the economy, expanding opportunity for all Americans, slashing government red tape, maximizing freedom for ordinary Americans and putting law-abiding constitutionalists onto the federal courts.
Good luck, Mr. Obama. Looks like somebody jumped the Red Heifer.
Source>https://www.washingtontimes.com/news/2018/sep/9/obama-reminds-voters-why-they-backed-trump/
Posted by theodore miraldi at 8:29 AM