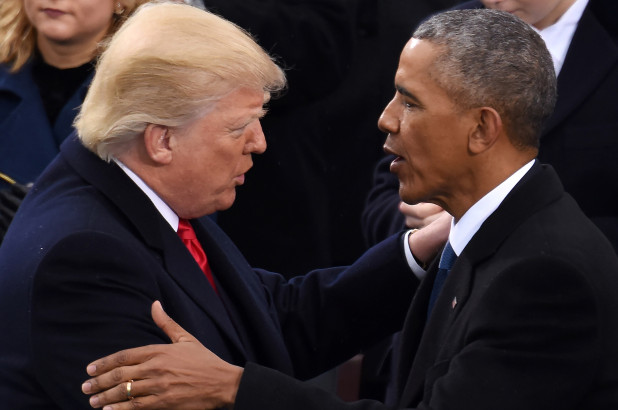 
President Trump on Monday mocked his predecessor Barack Obama for saying more than two years ago that Trump would need a “magic wand” to bring back jobs to the United States.
“‘President Trump would need a magic wand to get to 4% GDP,’ stated President Obama. I guess I have a magic wand, 4.2%, and we will do MUCH better than this! We have just begun.” Trump wrote on his Twitter account.
But Trump’s mention of Obama’s comments about a “magic wand” appear to reference a June 2016 town-hall event in Indiana when the former president was asked about Trump’s promise to kick-start manufacturing jobs in the country.
“Well, how exactly are you going to do that? What exactly are you going to do? There’s no answer to it,” Obama said.
“He just says, ‘Well, I’m going to negotiate a better deal.’ Well, what, how exactly are you going to negotiate that? What magic wand do you have? And usually the answer is, he doesn’t have an answer,” Obama continued.
Gross domestic product under Trump hit 4.1 percent in the second quarter of this year – showing a growing economy.
But the Obama administration also celebrated economic gains, with a 5.1 percent GDP in the second quarter of 2014 and four quarters of growth above the 4.0 percentage rate.
Obama, who has been speaking on behalf of Democratic candidates in November’s midterm elections, took credit last week for helping to spark the economic recovery after the 2008 recession.
“I’m glad it’s continued, but when you hear about this economic miracle that’s been going on, when the job numbers come out, monthly job numbers, and, suddenly, Republicans are saying, ‘it’s a miracle.’ I have to kind of remind them, actually, those job numbers are the same as they were in 2015 and 2016,” he said during a speech in Illinois.
Source>https://nypost.com/2018/09/10/trump-wants-obama-to-know-he-has-a-magic-wand/
Posted by theodore miraldi at 12:40 PM