Count on Hillary RUNNING AGAIN in 2020 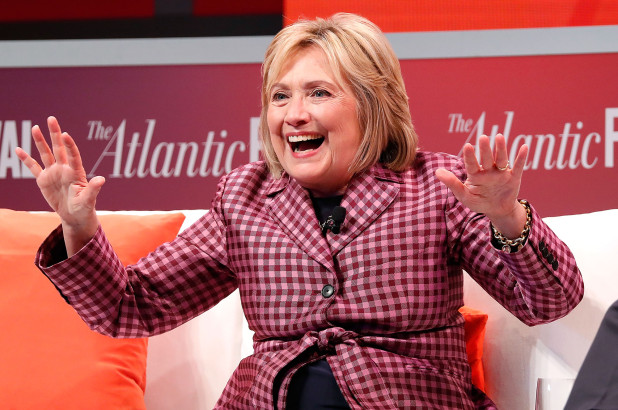 
This is beyond odd, but here goes. I rise to defend Hillary Clinton.
She is under attack and this time, the long knives are wielded by members of her own clan. Suddenly, after two years of indulging Clinton’s blame games and pity parties, lefty pundits say she’s talking too much, she’s stuck in the past, she had her chance and she blew it.
Vanity Fair, declaring that she “still hasn’t learned the lessons of #MeToo,” is furious that Clinton said her husband’s Oval Office dalliance with Monica Lewinsky was not an abuse of power ­because the 22-year-old intern “was an adult.”
Politico flatly declared Clinton a “problem” who won’t go away and fretted that Democrats “don’t know what to do” about her.
A New York Times columnist, noting that Clinton is a font of gaffes and a focus for Republicans, accused her of “moral arrogance” and wrote that “someone needs to perform an intervention.”
The passions are real and the imagery colorful. Imagine an intervention where a pink pussy-hat posse forces Clinton into a van and drives her to a remote cabin in the woods to keep her from talking.
Alas, the motives are suspect. These three writers, all female, are not so much angry at what Clinton is saying as they are over the timing. The gist of their complaint is that she is hogging the spotlight they believe should be trained on Democrats running in the midterms. They’re mad because they fear she’s undercutting the holy war they subscribe to against President Trump.
Intramural feuds are often bloody, but this one is also stupid. Trying to silence Clinton is a lost cause and, even if it succeeded, wouldn’t cure what ails Democrats.
In fact, shutting her up might push the party even deeper into the wilderness.
Implicit in the charge that Clinton is the problem is the assumption that others are the solution. It’s a fair point — until you try to name any Dem who has a better shot at serving as the party’s leader, uniting it around a message and potentially defeating Trump in 2020. After all, that’s the job that is vacant.
So let us run through the parade of likely applicants, starting in the Senate: Bernie Sanders, Cory Booker, Kamala Harris, Elizabeth Warren, Amy Klobuchar and Kirsten Gillibrand.
Anybody stand out? While there is political talent, none strikes me as a heavyweight contender who could lead the party and go toe-to-toe with Trump.
Sanders is running on vapors, Booker is a lightweight who embarrassed himself with the Spartacus shtick and Gillibrand is a ­do-nothing hack.
As for Warren, CNN, showing its usual tin ear, moved her to the top of the Dem field just before she imploded with her disastrous DNA test. Her silly repetition of the now-disproven claim that she has significant Native American ancestry opens her to endless ridicule and further diminishes her ­already narrow appeal.
Others advertising their availability include Joe Biden, Eric Holder, Montana Gov. Steve Bullock, Los Angeles Mayor Eric Garcetti and former Massachusetts Gov. Deval Patrick.
Same question: Does anybody in the group look like a champion in waiting? Not to me and, to judge from the lack of great enthusiasm, not to big funders or hot-shot consultants.
Two others in the thinking-and-hoping stage are New York’s feuding Frick and Frack, Mayor de Blasio and Gov. Cuomo.
Mayor Putz is term-limited and it looks as if his career has peaked. His image of being lazy, corrupt and incompetent means he’s not an asset to anyone, so he may have to get a real job when he finally leaves City Hall.
As for Cuomo, his mediocre rec­ord might get him a third term in deep-blue New York, but it’s not likely to endear him to national Dems. He trusts no one, including himself, which is why he hides from the media, lest he say things like America “was never that great.”
His habit of ducking debates won’t fly in a grueling presidential campaign against numerous competitors, and the rampant corruption on his watch makes him a fat target.
Billionaire Michael Bloomberg is also considering a run, and fellow richie Tom Steyer, whose deep pockets are funding the “Need to Impeach” movement, could be a candidate. Oprah flirted with the idea before saying no, but don’t be surprised if she flirts again.
The list, then, is long, varied and growing — but not compelling. Which is why Clinton, despite her enormous flaws and two presidential defeats, can’t be ruled out as the party’s best hope. God knows she wants it more than anybody else.
It’s also why I have been saying for months that she was keeping her options open and might actually seek a rematch with Trump.
And that was before she and Bill Clinton announced their six-month speaking tour. The gambit is designed to keep her name front and center without having to declare herself a candidate. Her recent phone calls to White House reporters also signal her plan.
So I was not surprised when one of her former aides, Philippe Reines, admitted to Politico that Clinton might run. He cited her fan base, said she was tough enough to go against Trump and could raise the money.
There you have it, the official word that attempts to silence her are doomed. Brace yourself — she’s baaaack!

If nothing else, the trial over whether Harvard discriminates against Asian-American students is revealing the messy ways that top schools decide who gets admitted.
It’s no surprise, for example, that when the question involves legacies, donors’ offspring and athletes, academic merit is often not the deciding factor. Yet most galling is the claim by Harvard’s lawyer that “if it considers race, it is always considered in a positive way.”
That’s sophistry. With a finite number of openings, to consider race as a reason for admitting one student inevitably means shutting out another student, presumably of a different race.
Even an Ivy Leaguer can figure that out.

Reader George Merrill asks the $80 billion question. He writes: “Florida and New York have similar-sized populations so you would think the cost of state services would also be similar. However, this is not the case. The Florida budget is $88 billion while New York’s is $168 billion.
“I find the government-provided services in Florida to be excellent. Therefore, it is a mystery to me why New York spends 90 percent more money to provide the same services.
“Please clarify.”
My answer: Waste, fraud and abuse. Everything else is detail.

Nicholas Saridakis wants to answer my question about why President Trump would stoop to call Stormy Daniels “Horseface.”
He writes: “I no longer begrudge Trump his shots at his foes and no longer care about his being ‘presidential.’
“Look where it’s gotten us. The fools who hate Trump can play the dignity game all they want. It no longer matters.”
Source>https://nypost.com/2018/10/20/count-on-hillary-clinton-running-again-in-2020/
Posted by theodore miraldi at 9:11 AM