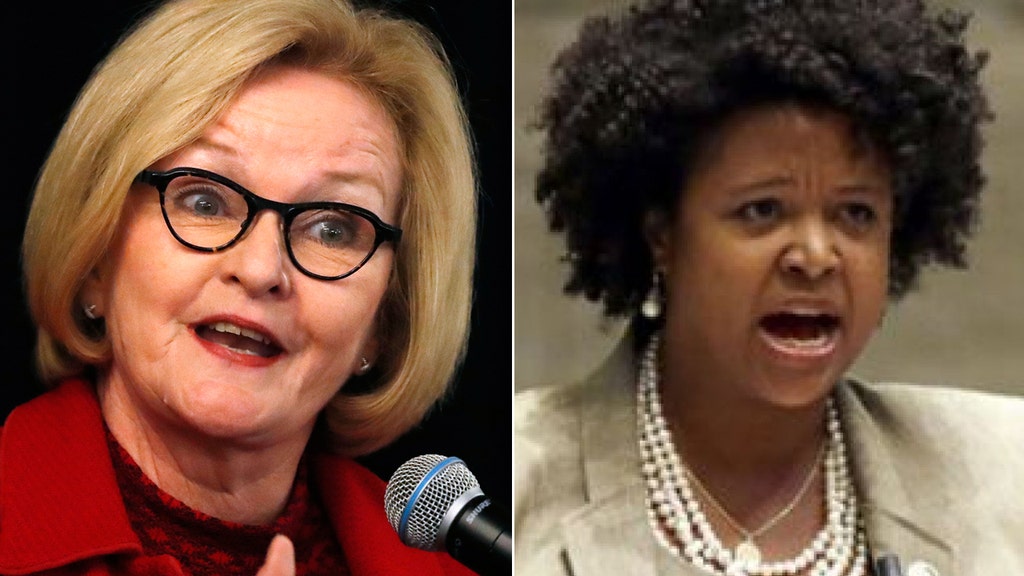 Sen. Claire McCaskill’s, D-Mo., efforts to distance herself from “crazy Democrats” sparked a fiery backlash from a Missouri Democratic state senator, who responded by calling her a “piece of s---” and nicknaming her “Dixie Claire.”
“Claire McCaskill is desperate,” state Sen. Maria Chappelle-Nadal tweeted. “She’s a piece of s---. Instead of knowing why people of color are angered by this administration, she chooses to put us and our families in harm’s way. If my family is harmed, blame it on Claire McCaskill. She deserves to lose. She is not a Democrat.”
Chappelle-Nadal’s comments were first reported by The Daily Caller.
McCaskill said in an interview earlier this week with Fox News’ Bret Baier that she was not a "crazy Democrat," and took a swipe at Chappelle-Nadal in the process. The senator also released a radio advertisement in which a narrator assured constituents, "Claire's not one of those crazy Democrats."
“The crazy Democrats are people who walk in restaurants and scream at elected officials’ faces,” McCaskill told Baier. “The crazy Democrats are ... we have a state senator here in Missouri that actually advocated for the assassination of President Trump. That’s a crazy Democrat.”
McCaskill was apparently referring to a comment from August last year in which Chappelle-Nadal said on Facebook: “I hope Trump is assassinated.” She eventually deleted the post and apologized.
MISSOURI DEMOCRATIC STATE SENATOR SAYS SHE HOPES TRUMP IS ASSASSINATEB
“I posted something on my personal Facebook and I should not have done that, and for that I am sorry for that," Chappelle-Nadal told St. Louis television station KMOV at the time. "But I am not going to shy away from what caused that anger at all, I'm not going to shy away from that."
At the time, McCaskill said that Chappelle-Nadal should resign.
McCaskill is in a tight race with Missouri Republican Attorney General Josh Hawley ahead of next week’s midterm elections.

Video
But the comments, possibly designed to position herself as a moderate in a state  Trump won comfortably in 2016, angered Chappelle-Nadal.
“White Supremacy would place a person of color in physical danger,” she tweeted. “That's what Claire McCaskill has done to my family. Shame on you, Dixie Claire.”

White Supremacy would place a person of color in physical danger. That's what Claire McCaskill has done to my family. Shame on you, Dixie Claire.

There are no more plantations. You are not Madam Massa. #MoSen

Twitter Ads info and privacy
The state senator wasn't the only one McCaskill called out. In the interview with Baier, she also swiped at Sens. Bernie Sanders, I-Vt., and Elizabeth Warren, D-Mass.
"I would not call my colleagues crazy, but Elizabeth Warren sure went after me when I advocated tooling back some of the regulations for small banks and credit unions. I certainly disagree with Bernie Sanders on a bunch of stuff. So I’m not afraid -- I’ve done those kinds of things which do separate me, I think, from some of the kneejerk folks that just are against the president no matter what," she said.
Fox News’ Alex Pappas contributed to this report.
Source>https://www.foxnews.com/politics/missouri-dem-calls-sen-mccaskill-a-piece-of-s-t-for-distancing-herself-from-crazy-democrats
Posted by theodore miraldi at 5:06 PM