Democrats on the Senate Judiciary Committee used last week’s hearing over the accusations of sexual assault against Supreme Court nominee Brett Kavanaugh to push a unified message: the FBI must investigate the allegations.
“If you’re very confident of your position, and you appear to be, why aren’t you also asking the FBI to investigate these claims?” California Sen. Dianne Feinstein, the top Democrat on the committee, pressed Kavanaugh during Thursday’s tense hearing. The next day, at GOP Sen. Jeff Flake's urging, President Trump ordered the FBI to open such a "supplemental" background investigation.
But now, many Democrats are arguing that the probe is not enough, prompting accusations from Republicans that they're already moving the goalposts.
Vermont Sen. Bernie Sanders wrote in a weekend letter that the FBI shouldn’t just probe the accusations – but should also conduct an investigation into whether Kavanaugh was honest during his hearing. He called for investigating whether Kavanaugh committed perjury, "given the very serious fact that lying to Congress is a federal crime."
"A fundamental question the FBI can help answer is whether Judge Kavanaugh has been truthful with the committee,” Sanders said. “This goes to the very heart of whether he should be confirmed to the court.”
In other cases, Democrats who enthusiastically called for an FBI investigation last week now seem to be downplaying it.
“Yes, of course there should be an FBI investigation,” Connecticut Sen. Chris Murphy tweeted Friday. “But whatever they find doesn’t change the fact that Kavanaugh, especially after his performance yesterday, is the most dangerous Supreme Court pick of our lifetime.” 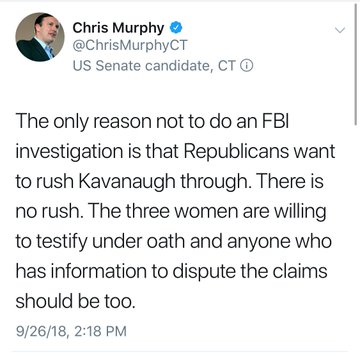 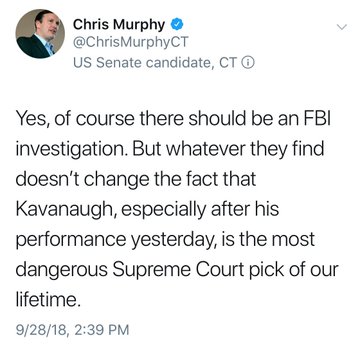 Before & after GOP agreed to investigation

Twitter Ads info and privacy
Republicans for days had resisted a new FBI investigation into the allegations. But Trump's order came after several undecided Republican senators -- namely, Flake -- whose votes are needed to confirm Kavanaugh called for a weeklong FBI probe before a floor vote.
“I’ve ordered the FBI to conduct a supplemental investigation to update Judge Kavanaugh’s file," Trump said in a statement. "As the Senate has requested, this update must be limited in scope and completed in less than one week.”
Kavanaugh, who has denied all the allegations, said in a statement he will "cooperate" with the FBI.
Flake himself called for the FBI to wrap up its investigation in a week or less, while investigating just the accusations. But Democrats have since cried foul over those limits – saying the FBI should be not be restricted in time or subject.
“No artificial limits as to time or scope should be imposed on this investigation," an attorney for Kavanaugh accuser Christine Ford, Debra S. Katz, said in a Friday statement.
Left-leaning journalists also have complained that the investigation won’t focus enough on Kavanaugh’s drinking habits in high school and college.
“It’s not just that they aren’t allowed to investigate the third accuser’s claims,” NBC’s Ken Dilanian tweeted. “They also won’t look into his drinking at Yale or pull Mark Judge’s employment records or take other basic investigative steps, we are told.”

It’s not just that they aren’t allowed to investigate the third accuser’s claims. They also won’t look into his drinking at Yale or pull Mark Judge’s employment records or take other basic investigative steps, we are told. Unless something changes. https://www.nbcnews.com/politics/politics-news/white-house-limits-scope-fbi-s-investigation-allegations-against-brett-n915061 …

Limits to Kavanaugh investigation have not changed, despite Trump's comments

Twitter Ads info and privacy
CNBC’s John Harwood argued on Twitter, “his drinking relates directly to a) sexual misconduct he’s accused of from his high school/college days, and b) the truthfulness of his sworn testimony last week.”

his drinking relates directly to a) sexual misconduct he’s accused of from his high school/college days, and b) the truthfulness of his sworn testimony last week

Rich Lowry
✔@RichLowry
Consider where we are: It is now considered an outrage that there isn’t an FBI investigation into a Supreme Court nominee’s college drinking https://twitter.com/kendilaniannbc/status/1046162255962877952 …

For goalpost-moving Democrats & your media wing. I’ve been interviewed many times for FBI background checks for classmates, soldiers, & nominees. Every time, agent asked about any drinking problems. You really think FBI missed that in SIX background checks of Judge Kavanaugh?

Twitter Ads info and privacy
Over the weekend, a Yale friend of Kavanaugh’s, Charles Ludington, said in a statement he is “deeply troubled by what has been a blatant mischaracterization by Brett himself of his drinking at Yale.” He said Kavanaugh was a “frequent drinker, and a heavy drinker,” and he planned to give a statement to the FBI saying so.
Not all Democrats have dismissed the newly ordered FBI probe outright, however.
Delaware Sen. Chris Coons, who played an instrumental role in getting Flake to back the probe, said he’s optimistic new information will be learned as a result of the investigation.
“I think we will be in a different place,” Coons said on CBS’ “60 Minutes” on Sunday. “Because lots of survivors around the country will feel that Dr. Ford’s story was heard and respected and further investigated.”
It could also go the other way, he acknowledged.
“We may well be in a different place a week from now because Judge Kavanaugh and his family may well have had exculpatory evidence brought forward,” he said.
Source>https://www.foxnews.com/politics/dems-accused-of-moving-goalposts-on-kavanaugh-after-fbi-probe-ordered
Posted by theodore miraldi at 1:29 PM