Hillary’s Call For a ‘CIVIL’ War? 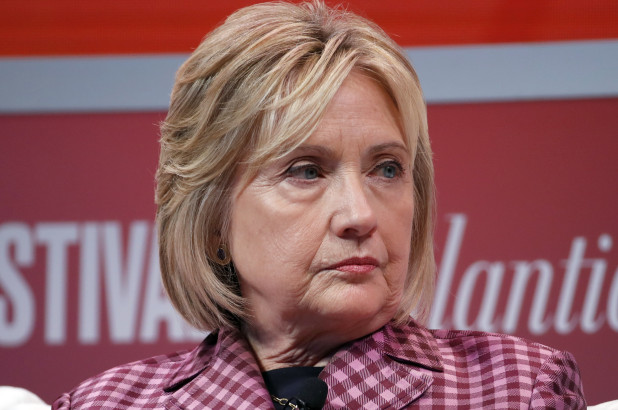 
Two events from the last two days stand out. The first came Monday night with President Trump’s forceful yet compassionate speech at the swearing in of Brett Kavanaugh to the Supreme Court.
The president opened with an extraordinary apology on behalf of the country to Kav­anaugh and his family“for the terrible pain and suffering” they endured during the historically brutal confirmation process. He said the unfounded allegations violated fairness and “the presumption of innocence.”
Trump also tenderly addressed Kavanaugh’s young daughters, telling them “your father is a great man, a man of decency, character, kindness and courage.”
The event was something of a spike-the-football moment in front of a cheering White House audience and as such was a clever piece of stagecraft, where Republican Sens. Mitch McConnell, Charles Grassley, Lindsey Graham and Susan Collins were saluted.
But the ceremony was much more than that mere boosterism. With the eight other Supremes sitting in the front row, Trump aimed to restore dignity to the judiciary at a time when the dirtiest tricks of politics have buried the court in a mountain of mud.
The president is right to worry that the character-assassination attempt on Kavanaughmay turn out to be a seminal moment in American political and cultural history. The ideas that the court is just another political branch and that the presumption of innocence no longer applies if you are on the other team represent a seismic shift in how we look at each other and the nation as a whole.
If those ideas stick, we are in more trouble than we can imagine.
And while Trump has at times unnecessarily contributed to the rancor, he was terrific Monday in trying to repair what Senate Democrats and their media handmaidens tried to destroy.
Which brings me to the second event of note: Hillary Clinton’s statement Tuesday that Democrats “cannot be civil” as long as Republicans hold the White House and Congress.
“You cannot be civil with a political party that wants to destroy what you stand for, what you care about,” Clinton told CNN. “That’s why I believe, if we are fortunate enough to win back the House and/or the Senate, that’s when civility can start again. But until then, the only thing that the Republicans seem to recognize and respect is strength.”
There you have it — a declaration of war and a license for violence. Where is the media outrage?
Clinton knows we are already in the danger zone when it comes to the political temperature. Her comments, then, are as reckless as bringing a can of gasoline to a bonfire.
She’s stoking trouble to gain a foothold in the 2020 race — and damn the consequences.
Her claim that civility can return when Dems have power is an admission that the ends justify the means.
Then again, she never fails to disappoint. As I wrote Sunday, she has spent the last two years casting doubt on the legitimacy of the Trump presidency because the election didn’t go her way. That makes her guilty of the very thing she found “horrifying” when Trump suggested he might not abide by the results if he thought they were rigged.
“He is denigrating — he is talking down our democracy. And I am appalled that someone who is the nominee of one of our two major parties would take that position,” she said in their final debate, in October of 2016.
She added, “That is not the way our democracy works.”
But it does work exactly that way when Democrats are denied what they feel entitled to. They should be careful what they wish for.
For if the Kavanaugh experience revealed anything, it is that Trump’s GOP knows how to fight back and win. It is hard to imagine that Kavanaugh would have survived such an onslaught under any other ­recent Republican candidate or president.
There were so many reasons, and so much media pressure, that it would not have been surprising if a bloc of senators called the allegations a “distraction” and waved a white flag. They didn’t because Trump and Kavanaugh didn’t back down.
Still, there is danger when two sides both think they can outlast the other. Responding to my concern that America might be sleepwalking into a second civil war, a number of readers agreed. Some said they welcomed it.
Curt Doolittle wrote this: “We aren’t sleepwalking into it, we know exactly what we’re doing and why. The hard right and hard left are planning on it, ready for it, and looking for an opportunity.”
He said the pressure has been building and that “the only reason it hasn’t turned hot is the outlier of Trump’s election. If Clinton had won, we’d already be there.”

City Hall in the X-Treme

The City Hall press release was overflowing with superlatives. The action was “historic,” a “landmark” and “groundbreaking.”
Did Mayor Putz find a cure for homelessness? Did he solve the problem of failing schools? Did he fix public housing or the subways?
Nah, the small stuff is beneath him. His “stop the presses” accomplishment was signing legislation putting a third gender on city birth certificates.
As his office described it, “In addition to the ‘male’ and ‘female’ designations, birth certificates will also show an ‘X,’ allowing gender non-binary people who identify neither as men nor women to have a birth certificate that more accurately reflects their identities.”
The law takes effect Jan. 1 and removes the requirement that a medical or mental health professional affirm an individual’s gender to change the certificate.
The effect is that anyone can simply demand a new birth certificate and chose a new gender. It’s not clear if there are age requirements or limits to the number of times an individual can make changes.
To the roster of activist groups hailing the action, the change is something of a Holy Grail. First Lady Chirlane McCray suggested it was just a first step, saying “We will not stop there — we strive to extend that dignity to every aspect of life.”
I don’t doubt that gender identity is a serious, complex issue for some people. But I do wonder about the impact of this dramatic change on society, including gender roles in everything from sports to toilets, and about the priorities of the mayor and City Council.
Do they have the same passion for public safety and good schools? Do they care as much about the unfairness of the tax system?
My fear is that they don’t, and that their intensity about narrow issues is a fig leaf hiding their surrender on broad ones. There are superlatives for that, too.
Disgraceful, cowardice and shameful come to mind.

Web biz gone in a snap

Headline: Snapchat is quickly running out of money.
Well, when a company’s business model is based on pictures and messages that disappear, is it really a surprise that the company itself might disappear?
Source>https://nypost.com/2018/10/09/wheres-the-outrage-over-hillarys-call-for-a-civil-war/
Posted by theodore miraldi at 7:21 AM