Media's 'ROCK STAR' Democrats Beto, Gillum and Abrams About to FLAME OUT 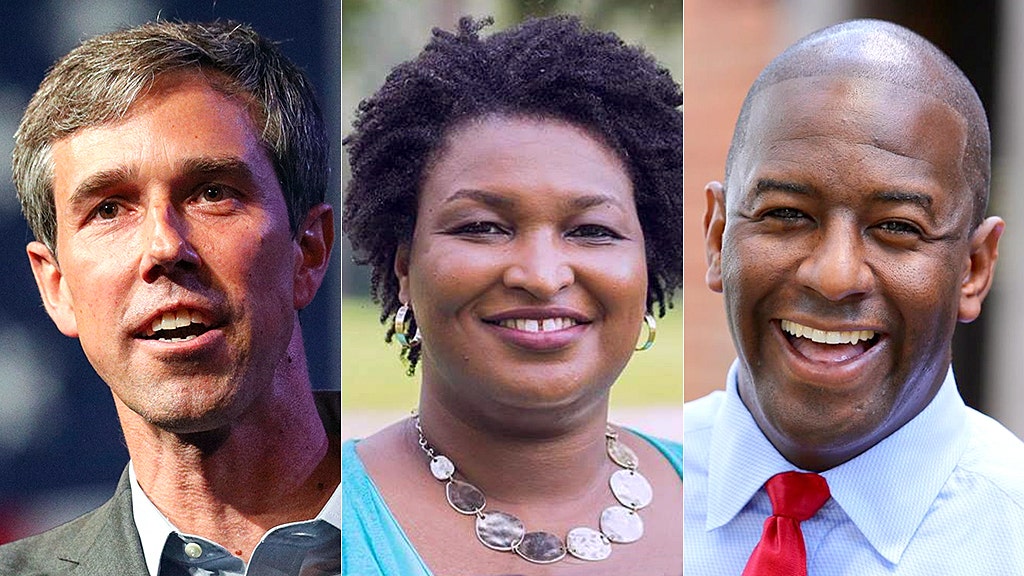 
The media has anointed a trio of liberal candidates as the new rock stars of the left, but a closer look shows Andrew Gillum, Stacy Abrams and Beto O’Rourke can barely provide elevator music.
"Abrams is a star in the Democratic Party,” gushed MSNBC’s Chris Hayes, discussing the Georgia gubernatorial candidate.
“Gillum brings something, he brings energy, he brings passion, he`s a star,” raved NBC News’ Chuck Todd, discussing the Tallahassee mayor running for governor of Florida.
"You're a rockstar!” ABC News reporter Paula  Faris told O’Rourke, the Texas Democratic congressman trying to unseat Sen. Ted Cruz. “No you really are! You can't go anywhere without getting noticed."
But in these final weeks of campaigning, we are learning more about all three that should give all the voters in their respective states reason to question the non-stop hype. Let’s start with Gillum. Text messages reveal he accepted a hotel room, tours and tickets to the Broadway show, “Hamilton” from real estate developers — without ever disclosing the gifts.  The problem was, those “developers” were undercover FBI agents.
Gillum’s Republican opponent, Rep. Ron DeSantis, confronted him with all of this at their debate Sunday, asking the simple threshold question, “Did you pay for the “Hamilton” ticket or did the undercover FBI agent pay for the “Hamilton” ticket?
Gillum’s reply was vague, defensive and bore at least a hint of the race card.

Also remember that when you look at stars, you’re actually seeing the light reflected from a star that has actually already burned out.

“I’m a hard-working person, I know that might not fit your description of people like me do but I work hard for everything that I’ve gotten in my life and I don’t need anybody handing me anything for free,” he said.
The spin won’t fool anyone with a pair of eyes and a brain. In Aug. 10, 2016 text messages just released by Gillum’s lobbyist friend, he is told clearly told by his brother that "Mike Miller (who was really the undercover FBI agent) and the crew have tickets for us for Hamilton tonight at 8PM."
"Awesome news," Gillum texted in response.
Whether his brother gave him the ticket or not, he knew the source of the ticket: a supposed developer who needed his help.  This is why the state of Florida’s ethics commission is investigating Gillum — the probe remains open and the Florida Democrat’s star seems to be falling. Last night, at his second and last debate with DeSantis, Gillum was pressed on the issue and things got hot.
"He wants you believe that he’s not under investigation," DeSantis said. "Why would an undercover FBI agent posing as a contractor give you a ticket to Hamilton?"
"I take responsibility for not having asked more questions," Gillum said. "But let me tell you, I’m running for governor. In the state of Florida we have many issues. And tickets to Hamilton ain’t one of them."
Nice try, Andy.  I suggest you move to San Francisco where, with your views and style of politics, you’d fit right in.
Now let’s move on to governor’s race in Georgia, where video footage of gubernatorial candidate Stacy Abrams surfaced showing her and others on the steps of the Georgia Capitol burning the state flag in protest.  Abrams sought to explain away her flag torching as a youthful indiscretion inspired by her desire to take on racism.
"Twenty-six years ago as a college freshman, I along with many other Georgians -- including the governor of Georgia -- were deeply disturbed by the racial divisiveness that was embedded in the state flag with that Confederate symbol,” she said.
That may be true. But the governor of Georgia at the time did not set the flag on fire on the capitol steps. He worked through the legislature to amend the flag and remove the Confederate symbols that some found offensive.
Does a candidate for governor consider it right to simply destroy public images or symbols that individuals might find offensive?  That’s a question the people of Georgia will have to answer.
Then there is “Super Beto,” or more properly “Robert O’Rourke,” who has become a Democrat Party matinee idol immortalized in a Clark Kent-style mural. He skateboards! He once played guitar in some sort of band! He is about to get clobbered on Nov. 6.
Back in 1998, when Beto was 26, he was drinking under the influence, struck another car and attempted to flee the accident.  He has since tried to soft-peddle the arrest.
“I did not try to leave the scene of the accident, though driving drunk, which I did, is a terrible mistake for which there is no excuse or justification or defense, and I will not try to provide one,” O’Rourke said.
So, the arresting officer who wrote in a police report at the time, “The driver attempted to leave the accident but was stopped by the [witness]," must have been lying. Nice try, Superman.
As voters head to the polls, it would serve them well to see through the liberal media pixie dust to the reality of who these so-called Democrat superstars really are, and more importantly what they believe in: Open borders, higher taxes, government-run healthcare, gun control, and more regulations on business.
Also remember that when you look at stars, you’re actually seeing the light reflected from a star that has actually already burned out. Kind of like what the economy will be like if these three get into power.
Adapted from Laura Ingraham's monologue on "The Ingraham Angle," Oct. 24, 2018
Source>https://www.foxnews.com/opinion/laura-ingraham-medias-rock-star-democrats-beto-gillum-and-abrams-about-to-flame-out
Posted by theodore miraldi at 7:36 AM