With the critical midterm elections taking place on Tuesday, it appears Democrats are starting to panic.
In recent weeks, Democrats and many in the mainstream media have largely blamed President Donald Trump’s “rhetoric” for incivility across the country. Yet, several prominent Democrats have made incendiary — and sometimes violent — comments about their Republican counterparts.
On Wednesday, New York Democratic candidate Alexandria Ocasio-Cortez sent out a bizarre email demanding Democrats “push back” against Republicans and Trump, who she referred to as “cold-hearted monsters.”
In a very lengthy email, the self-described socialist vowed to protect voters from “white supremacist forces” that she claims are terrorizing Americans under Trump.
“Six days from now, we can defeat the brutal white supremacist forces of anti-Semitism, anti-immigrant nativism, and racism. We can hold accountable the cold-hearted monsters who have repeatedly attacked our health care,” the email stated.
“We can send a message to the bigots and billionaires that this country belongs to all of us. We can win if we show up on November 6. We must end Republican control of Congress and begin to reclaim our nation,” it added.
Later in the email, Ocasio-Cortez argued it’s time to push back against white supremacists, bigots, and Islamophobes, which could be a reference to Trump.
“Our chance to push back against white supremacist forces across our nation, against the xenophobes who are militarizing the border, against the bigots who seek to erase our transgender families, against the apologists for sexual assault and the Islamophobes who sow hate to divide us,” the email stated. 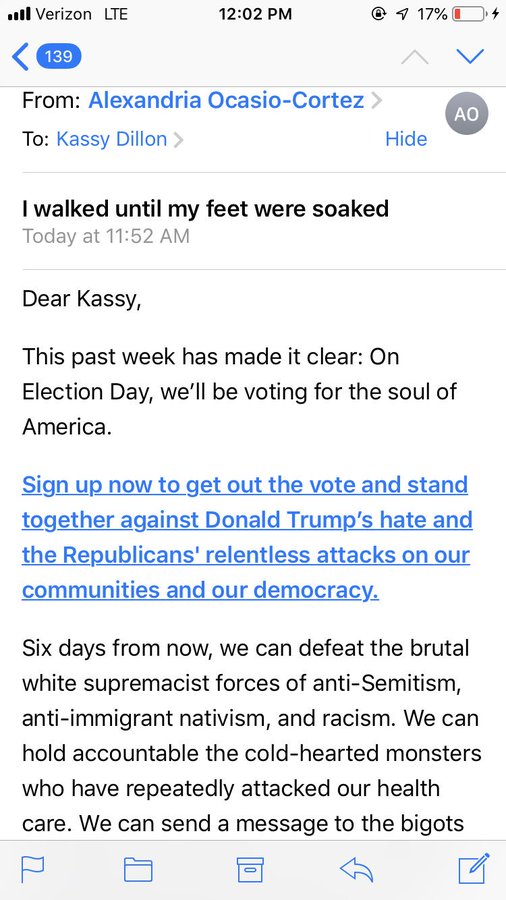 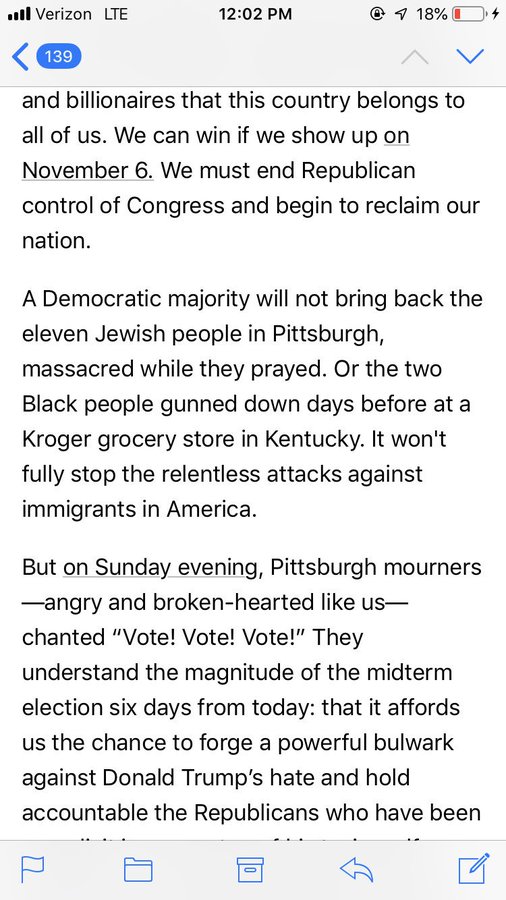 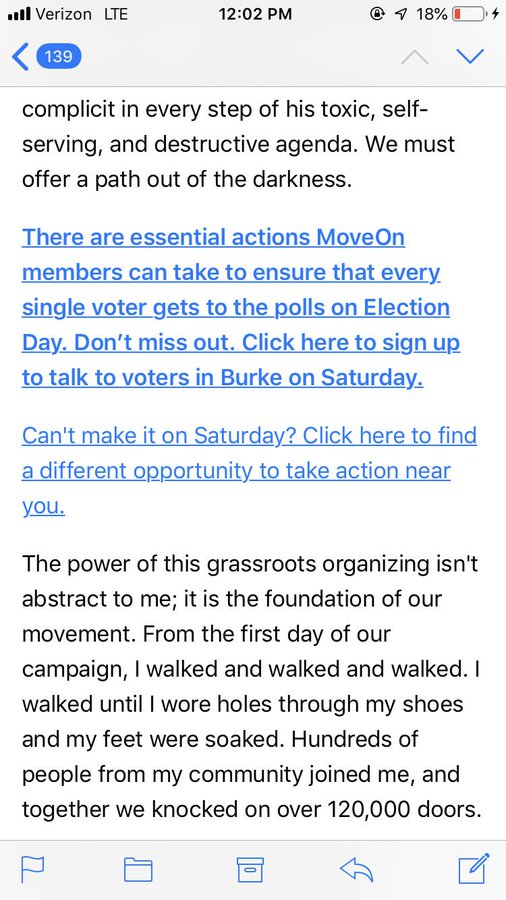 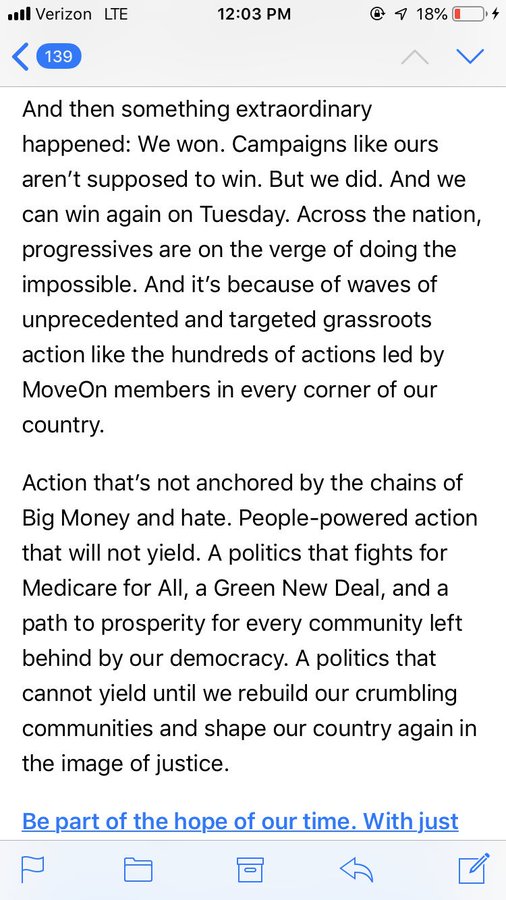 This is a disgusting email. You should be ashamed @Ocasio2018.

This is a disgusting email. You should be ashamed @Ocasio2018. 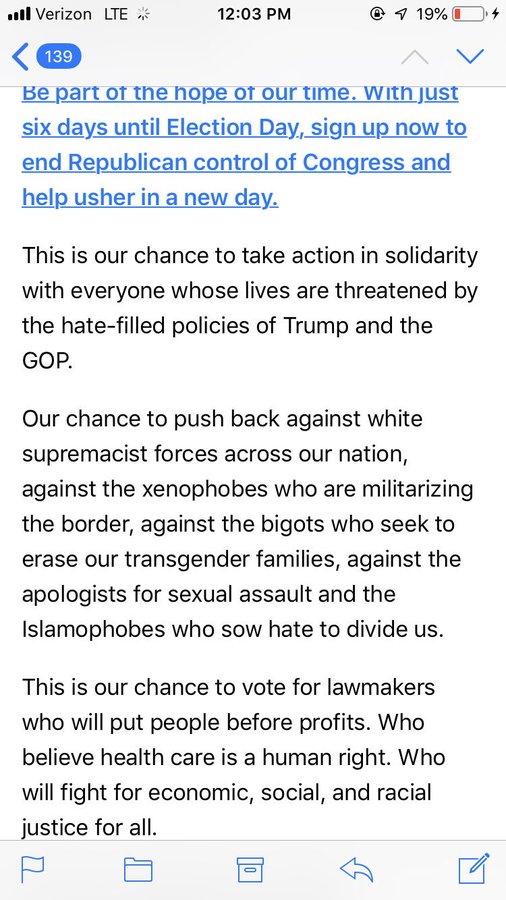 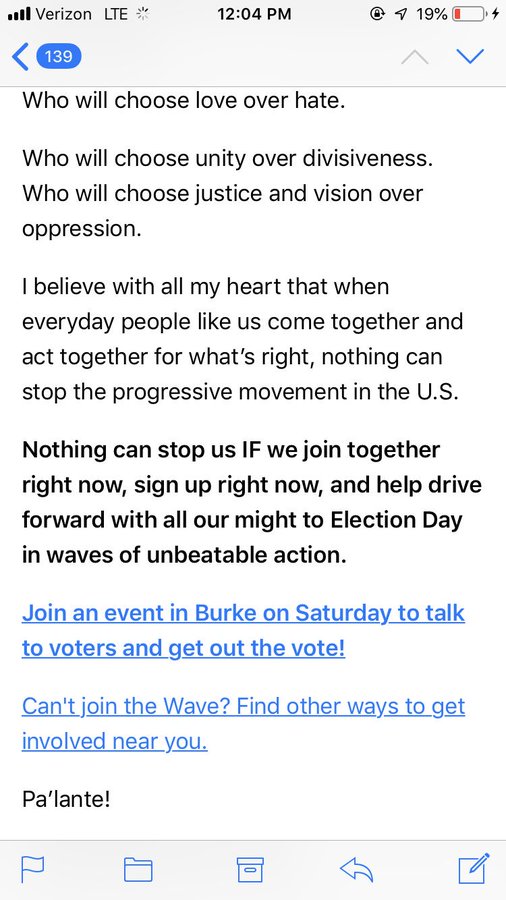 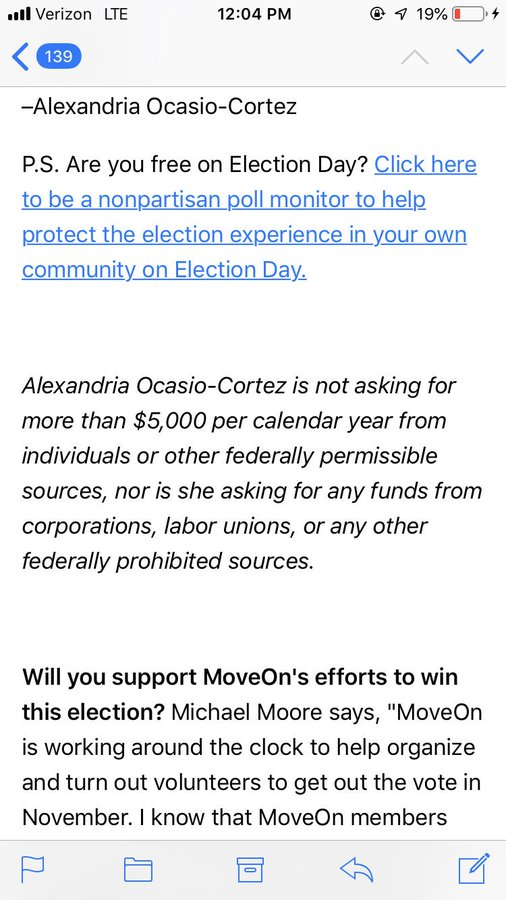 
Ocasio-Cortez sending out arguably one of the most bizarre political emails ever comes as several other prominent Democrats have made controversial comments.
On Thursday, former Vice President Joe Biden suggested during a campaign rally that a union boss should beat up a GOP lawmaker.
While stumping for struggling Democratic Sen. Heidi Heitkamp of North Dakota, Biden appeared to encourage a union president to use physical violence against GOP Rep. Kevin Cramer.
You Might Like

While reading from a piece of paper, Biden said Cramer had downplayed concerns from soybean farmers that their orders were not being purchased.
Biden then quoted Cramer as previously saying the soybean farmers “don’t have a very high threshold for pain.”
“Well, I get that the president of the trade union is up here, he’ll show him a threshold of pain,” Biden said.
“Don’t have a high threshold of pain?” Biden said, donning a smile while the crowd cheered.
Last Friday, former President Barack Obama also appeared very worried about getting Democrats out to vote on Tuesday.
While speaking during a rally in Wisconsin for Democratic candidates, the former president launched into a bizarre rant when trying to attack the president without his teleprompter, his voice cracking.
After accusing Trump and Republicans of “shamelessly lying” about the migrant caravan marching toward the United States, he implied the issue wasn’t a big deal ahead of the election.
You Might Like

“You know, as soon as the election’s over, everybody will be like, ‘What, what happened? We were being invaded. Where’d it go?'” Obama said. “We’ve got to stop falling for this stuff. We’re like Charlie Brown with the football. … Don’t fall for that kind of fear-mongering.”
Earlier this week, Sen. Bernie Sanders (I-VT), likely eyeing a 2020 presidential run, snapped at a debate moderator when asked about why he missed 71 percent of the roll call votes in 2016.
Sanders got very defensive when asked if he’d commit to missing fewer than 5 percent of votes if re-elected. The Vermont socialist apparently believed the question was a trap aimed at forcing him to tip his hand on whether he’ll run for president in 2020.
Sanders defended his less than stellar voting record in 2016 by claiming he was too busy running for president. He has also used rallies lately for other Democratic candidates to largely boast about his plans and ideas for America.
Democrats sure seem to be panicking ahead of Tuesday’s critical elections.

Posted by theodore miraldi at 11:15 AM