Will Democrats Offer El Chapo Asylum...Why Not! He can join the rest of his Drug Buddies on some street corner of America...tmiraldi 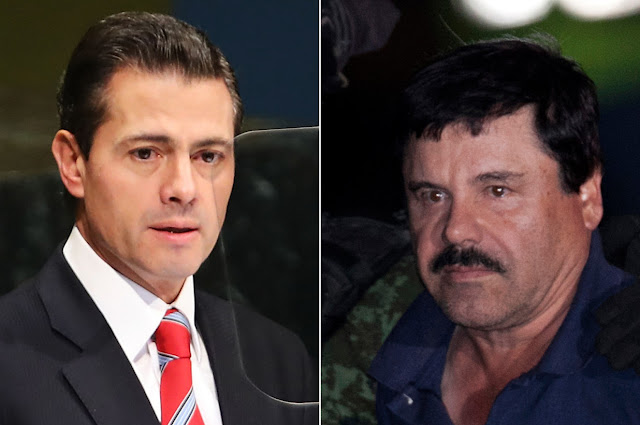 A cartel canary will continue to dish about accused drug kingpin Joaquin “El Chapo” Guzman in Brooklyn court Monday.
Jesus “El Rey” Zambada Garcia last week transfixed the courtroom with tales of bribery, baptisms and bloodshed as he faced off with his former boss.
This week, Zambada is expected to reveal he paid at least $6 million in hush money to the president of Mexico so that the Sinaloa Cartel could continue moving drugs through Mexico City, according to court transcripts made public Friday.
President Enrique Peña Nieto, who has denied taking the bribes, is just one of many officials Zambada has accused of accepting cartel funds.
Zambada estimated Thursday that he had paid around $300,000 a month to other public officials in Mexico City in order to keep them in the cartel’s pocket.
“One of my activities was to corrupt authorities,” said the accountant, whose older brother is Ismael “El Mayo” Zambada Garcia, Chapo’s business partner.
In 2004, Zambada said, Guzman told him to visit a general and “give him a hug” — and a $100,000 payment.
The government witness also explained that he declined to let Guzman stay at his ranch alone with his hitmen following his 2001 prison escape, when a corrections officer nicknamed “Chito” rolled Guzman out of the pen in a laundry cart.
Zambada, 57, smiled as he recalled his brother discussing what to do with “Chito” when he wanted to spill his guts to police.
“I told him, ‘Well, let him turn himself in,’ ” Zambada testified. “ ‘What can he say, the truth?’ ”
So far, Zambada’s testimony has been sprinkled with never-before-heard anecdotes regarding Guzman, who was constantly running from the law following his prison escape.
After Zambada declined to let him borrow his ranch Guzman lived with his gunman Barbarino for awhile, even attending a baptism for his host’s son — and terrifying the priest.
“He was surprised, he looked a little bit nervous,” Zambada recalled of the priest walking in to the christening, which was attended only by cartel members and their kin. “Chapo was coming out on the news all the time.”
The witness also testified that he heard Guzman reveling in the murder of a rival drug-trafficker, saying “that if anything had ever given him pleasure, it was to have killed Ramon Arellano.”
Guzman has spent the trial eyeing his ex-deputy with his arms crossed, eyes narrowed. Zambada has been hiding behind dark glasses.
Source>https://nypost.com/2018/11/19/el-chapo-allegedly-bribed-former-mexico-president-while-in-office/
Posted by theodore miraldi at 8:32 AM