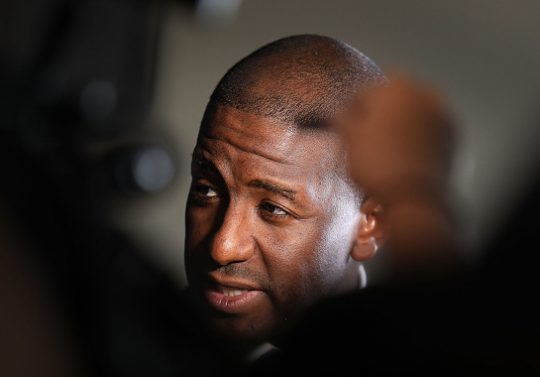 
Tallahassee Mayor Andrew Gillum (D.) conceded the Florida gubernatorial election Tuesday night, but his campaign is now rescinding that decision to allow more ballots to be counted.
With 99 percent of precincts reporting, the ballot returns show Republican Ron DeSantis leading by about 0.6 percent, a wider margin than the 0.5 percent required to trigger a recount, but Gillum’s campaign claims there are more outstanding ballots than Gillum realized when he conceded.
"On Tuesday night, the Gillum for Governor campaign operated with the best information available about the number of outstanding ballots left to count," Gillum campaign communication director Johanna Cervone said. "Since that time, it has become clear there are many more uncounted ballots than was originally reported."
Cervone added that their lawyer is helping monitor the situation and every ballot will be counted.
"Our campaign, along with our attorney Barry Richard, is monitoring the situation closely and is ready for any outcome, including a state-mandated recount. Mayor Gillum started his campaign for the people, and we are committed to ensuring every single vote in Florida is counted," he said.
Gillum ran on a progressive agenda in Florida, a state that went for President Donald Trump and has had Republican governors for two decades. Enthusiasm from the media and left-wing icons like Sen. Bernie Sanders (I., Vt.) were apparently not enough to get him over the line, as the Associated Press and others called the election for DeSantis.
Florida is no stranger to tight races and recounts, but Gillum’s decision not to concede appears to be a long shot. Sen. Bill Nelson (D.) is more likely to get a recount, however, since his deficit to Gov. Rick Scott (R.) in their Senate race is a mere 0.2 percent, small enough to trigger a recount.
Gillum’s support among progressives motivated many, such as comedienne Kathy Griffin, to call for him to reverse his concession. Since there is no possibility of a runoff in Florida–which may be triggered in in some state's if no candidate obtains at least 50 percent of the vote–it is unlikely anything will prevent DeSantis from taking the governorship.
Source>https://freebeacon.com/politics/gillum-rescinds-concession-many-uncounted-ballots-originally-reported/
Posted by theodore miraldi at 3:48 PM