Jim Acosta VIOLATED One of the Oldest RULES of Journalism 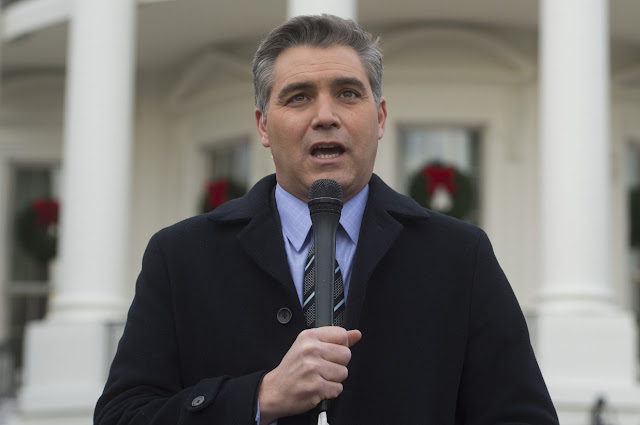 
By producing a split decision, the election that was supposed to end all elections turned out to be fairly predictable. But it’s the day after that was unlike any other.
The Republican president, the likely speaker of the Democratic-controlled House and the Senate’s Republican majority leader each started Wednesday by talking about working together to get things done. They talked to each other privately and talked separately in public about what they thought they could accomplish for the country.
For most Americans, that would make for a very good day. Given the overheated environment leading up to the midterms and the fear among many that we are drifting toward an era of disunion and spreading political violence, bipartisan pledges to work together for the common good were like the sudden emergence of a bright candle flickering in the wind.
Alas, it was the last thing some members of the White House press corps wanted, so they tried to snuff it out.
The conduct of a handful of so-called reporters during President Trump’s news conference was disgraceful beyond measure. This is not journalism, this is narcissism.
Naturally, the boorish Jim Acosta of CNN was the instigator. As is his habit, Acosta doesn’t ask questions — he makes accusations and argues. Almost daily, he does it with the press secretary; Wednesday, he did it with the president.
“I want to challenge you,” Acosta began after Trump called on him. Trump realized he’d made a mistake, murmuring, “Here we go” and Acosta didn’t disappoint.
He insisted that despite the president’s use of the word “invasion,” the caravan of Central America migrants “is not an invasion.”
He adopted a lecturing, I-know-best tone to declare that “they’re hundreds and hundreds of miles away; that’s not an invasion.”
Trump’s response should not have been necessary: “Honestly, I think you should let me run the country, you run CNN.”
After more back-and-forth, he called Acosta “a rude, terrible person” and said “CNN should be ashamed of itself.”

That should have been enough — Acosta got the attention he wanted and got Trump’s goat, giving his network video it could make hay out of for days. Besides, there were scores of other reporters raising their hands to be called on.
But Acosta wouldn’t give up the microphone and kept talking over Trump, trying to lob another grenade.
The president, clearly angry now and stepping away from the podium as if he might bolt the room, pointed at him and said forcefully, “That’s enough, that’s enough. Put down the mic.”
Finally, Acosta sat down, then stood up to argue again, interrupting another reporter. That reporter, from NBC, praised Acosta and picked up the baton by making his own accusation disguised as a question. He mentioned Trump’s attacks on Democrats and “asked” the president: Why are “you are pitting Americans against one another?”
Trump, to his credit, actually answered in a substantive way, but that didn’t satisfy because the reporter didn’t really ask a question. He, too, just wanted to make an accusation and argue. On camera.
There was a time not long ago when young journalists were taught not to become the story. Apparently, many news organizations have flipped that lesson on its head.
But we are witnessing something more insidious here than media trash talk. Plain and simple, we are watching expressions of personal hatred.
Yes, it’s true that most journalists lean far left and their bias sticks out like so many sore thumbs. That’s been true for a long time, but political bias is an insufficient explanation for the Jim Acostas of our time.
They hate Trump. They really, really hate him. There’s nothing professional about it.
They are not alone. Take a poll of almost any major newsroom in America and the vast majority of those working there, if they are being honest, will confess they, too, can’t stand the existence or the sound of Trump.
Or try to imagine Acosta and his ilk behaving in similarly hostile fashion toward Barack Obama or Hillary Clinton. Keep trying, but you can’t imagine it because it never happened. Both of those pols lied to journalists repeatedly, yet you can bet 90 percent still voted straight Democratic.

Even if they didn’t like Obama or Clinton, the political reporters would never dare accuse them publicly of anything, argue with them or interrupt them. Even when skeptical, they were respectful.
Recall how Obama used to spend 10, 15 and even 20 minutes answering a single question — without interruption.
Many in the press corps may have found him overbearingly arrogant. They may have resented the way he looked down on them and bristled at critical stories or tough questions. They knew he started more leak investigations than any other president, and might have feared him because his Justice Department wiretapped a Fox News reporter during a leak case.
But they would never interrupt him or insult him or refuse to give up the microphone.
White House press credentials are not a universal right. There are implicit expectations of proper behavior, and the White House decision to suspend Acosta’s credential is warranted.
Just as Acosta can’t go into a movie theater and yell “fire” when there is no fire, he should not have the right to hijack a presidential press conference to suit his own ego.
It is also long past time for his colleagues, including those from other outlets, to remind him that his shameful conduct is making all of them look bad. More important, scenes like Wednesday’s further erode the public’s already-declining mistrust of the media and fuel resistance to the First Amendment.
The anti-Trump antics are no longer a side show. America has serious problems as well as dangerous enemies, and the mere prospect of Trump, Nancy Pelosi and Mitch McConnell working together is the best news we could have hoped for Wednesday.
Instead, it was overshadowed by a few narcissists chasing their own vanity.
Source>https://nypost.com/2018/11/07/jim-acosta-violated-one-of-the-oldest-rules-of-journalism/
Posted by theodore miraldi at 7:26 AM