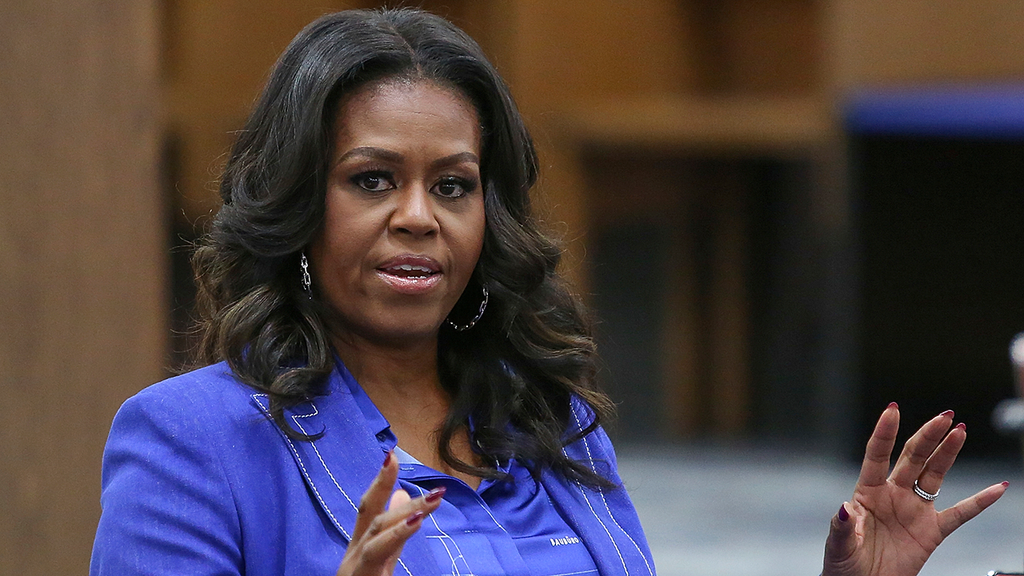 
Michelle Obama is rolling out her new memoir titled "Becoming" with exactly the sort of fanfare we've come to expect from the Obamas' 13-city book tour and touchy-feeling arena interviews by celebrity moderators.
Monday, the former first lady gave a pre-launch sit down with "Good Morning America" host Robin Roberts. And the issue of race figured prominently, even when Mrs. Obama spoke of meeting her husband
"He comes blowing into town, a little bit famous already, late for the first meeting," Roberts said, by way of setting the stage.
"Late. Late," Obama replied. "I was like, is he trifling? The black man's going to be late on the first date? I'm like ---"
"You went weren't overly impressed in the beginning?" Roberts said.

This Michelle Obama book launch, when you really think about it, is just one more example of someone cashing in for trashing Donald Trump.

"I wasn't, you know, I had my suspicions when a bunch of white folks are falling over a black man because I sort of think, okay, he can talk straight, so they think he's wonderful," Obama said. "So, that was my theory.
Stereotyping much?
Well, for all of her beauty, her glamour, her obvious accomplishments, the former first lady just can't get past race. It's like a loop that almost seems to play on her head, one that surfaces repeatedly in her public comments. In another  part of the interview, Roberts asked her what she wishes she could tell her pre-White House self.
"You know, the hard parts were the things that I expected," Obama said. "That it was going to be hard, you know. So much of this country lives in isolation and we just don't know each other. And so there were people who didn't know what a black woman was and sounded like. So, I knew that was going to be a challenge, that I would have to earn my grace."
Wait, wait, wait. Americans didn't know what a black woman was and sounded like? What America is that? Long before anyone had ever heard of Barack or Michelle Obama, America had already made enormous progress vis-a-vis race.
Think about it. Some of the biggest names in business, medicine, the law, entertainment, sports, and media are African-American.
But, of course, this isn't the first time we've heard Mrs. Obama share her feelings about America. Remember this comment she made after her husband won the nomination in 2008?
“Let me tell you something," she famously said. "For the first time in my adult life, I am proud of my country because it feels like hope is finally making a comeback.”
Now, that was before she and her husband won the nomination, but you get the point.
Again, until the Obamas showed up, America was in sad shape racially. At least we're led to believe that. Well, contrary to her well-cultivated public image, Michelle Obama, from her earliest years at Princeton, was extremely political.
She grew up in a middle-class Chicago household, the daughter of a Democrat ward boss and she worked her way up to the Ivy League. Laudable, no doubt. But contrast the gauzy media coverage of Michelle's personal story with the way another black female brainiac had been treated over the years, conservative scholar Condoleezza Rice.
Rice grew up in far worse conditions, in the segregated south. She would earn degrees from the University of Denver, Notre Dame, and a fellowship at Stanford University where she eventually became a professor and a provost. Oh, and she did become the first female African-American Secretary of State in 2005, long before most of us had heard of Michelle or Barack Obama. Was Condoleezza just unable to show us what a prominent woman looked and sounded like?
Again, it's all a matter of who tells the story. I mean, Michelle Obama collected more magazine covers than vegetables from that White House garden. While a real cover girl, First Lady Melania Trump, of course, an actual supermodel, is lucky if she gets her picture in the "Parade" magazine insert.
This Michelle Obama book launch, when you really think about it, is just one more example of someone cashing in for trashing Donald Trump. And also, of course, it helps set the table for 2020.
The Obamas still want to be the big power brokers in the Democratic Party, and Michelle is a global superstar, so she helps frame the issues for a Democratic Party, still straddling the old and the new.
In the aftermath of the election, Hillary Clinton tried to explain why 52 percent of white women voted for Donald Trump.
“A sort of ongoing pressure to vote the way that your husband, your boss, your son, whoever, believes you should," Clinton said.
Now, Michelle Obama takes that snide condescension a step further, writing in her memoir, "I will always wonder about what led so many women, in particular, to reject an exceptionally qualified female candidate and instead choose a misogynist as their president."
Very nice.
Now, remember, she wasn't paid that huge advance that she got for her book to share fashion tips or pumpkin pie recipes, but to deliver body blows to Trump with a velvet glove.
Here’s one more comment from the “Good Morning America” interview:
“I said what I continued to say. Being a commander-in-chief is a hard job and you need to have discipline and you need to read and you need to be knowledgeable. You need to know history. You need to be careful with your words. But voters make those decisions and once the voters have spoken, you know, we live with what we live with.”
Drat. It’s that thing called democracy.
Michelle Obama's attack on the president and her dismissive writing off of a whole chunk of the American electorate, and a sizable group of women that she claims that she cares so much about, may be surprising to some but it's really not unexpected.
Oprah today named it "Becoming" one of her book club picks. But if Michelle Obama continues the divisive and racially obsessed politics she's been peddling in advance of this release, readers may consider it one of their least favorite things. And they may even find some of her political commentary unbecoming.
Source>https://www.foxnews.com/opinion/laura-ingraham-michelle-obamas-book-launch-is-just-another-example-of-someone-cashing-in-on-trashing-trump

Posted by theodore miraldi at 9:03 AM