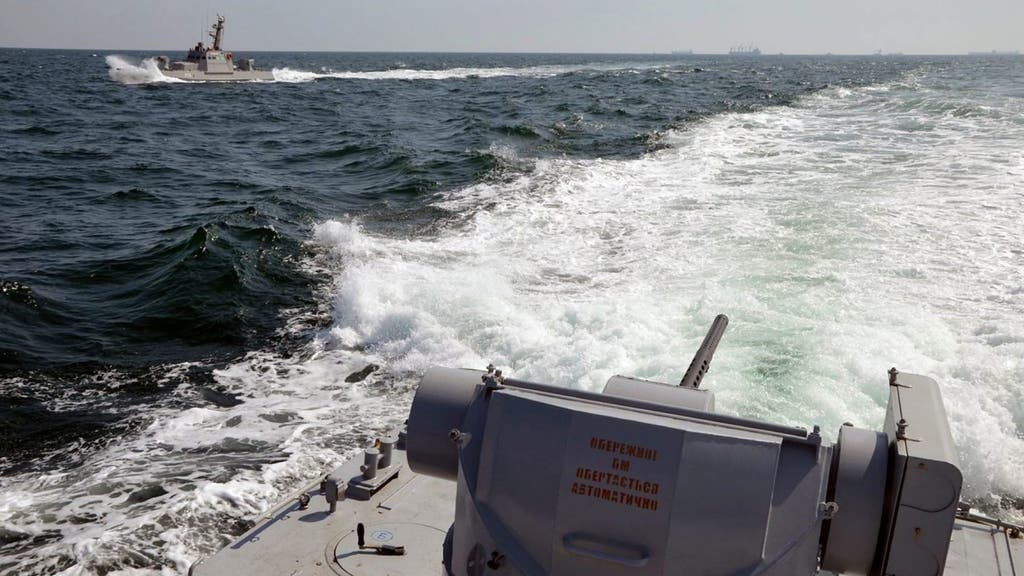 
Russia's military opened fire on three Ukrainian vessels -- seizing two naval artillery boats -- in the Black Sea off the coast of the Crimean Peninsula Sunday, Ukraine's military said, escalating tensions in the disputed region.
Ukraine's navy said Russian coast guard crews boarded the two artillery boats and a tugboat and seized the two larger vessels. The navy also said that two crew members were wounded, though their conditions were not immediately known.
In this file photo taken and distributed by Ukrainian Navy Press Service on Sunday, Nov. 25, 2018, two Ukrainian forces navy ships are seen near Crimea. The Ukrainian navy says a Russian coast guard vessel rammed a Ukrainian navy tugboat near Crimea, damaging the ship's engines and hull. (Ukrainian Navy Press Service via AP)
Earlier Sunday, Russia and Ukraine traded accusations over another incident involving the same three vessels. The incident began after the Ukrainian navy claimed a Russian coast guard vessel rammed the tugboat, which was escorting the artillery boats from Odessa on the Black Sea to Mariupol in the Sea of Azov, via the Kerch Strait.
"Russian coast guard vessels ... carried out openly aggressive actions against Ukrainian navy ships," the Ukrainian navy's statement said. It said the Russian ship damaged the tugboat's engine, hull, side railing and a lifeboat.
The statement added that Russia had been informed in advance about the planned journey.
Russia then blocked off the strait.
The Kerch bridge is seen blocked for ships entrance, near Kerch, Crimea, Sunday, Nov. 25, 2018. A Russian coast guard vessel rammed a Ukrainian navy tugboat near Crimea, damaging the ship's engines and hull, the Ukrainian navy said Sunday. (AP Photo)
The Kerch Strait is the only passage into the Sea of Azov beyond it. The strait is crossed by the recently completed Kerch Bridge, connecting Crimea to Russia. Transit under the bridge has been blocked by a tanker ship, and dozens of cargo ships awaiting passage are stuck.
Russia has not given any indication of how long it will keep the strait blocked off, but a long-term closure to civilian traffic would amount to an economic blockade of Ukrainian cities on the Azov coast. In addition, Russia's Black Sea Fleet greatly outmatches the Ukrainian navy.
Ukrainian cities on the Sea of Azov include strategically vital centers such as Mariupol -- the closest government-controlled city to Donetsk and Luhansk, the breakaway regions of eastern Ukraine controlled by Russia-backed separatists.
Russia's Federal Security Service, known as the FSB, said in a statement Sunday night that "there is irrefutable evidence that Kiev prepared and orchestrated provocations ... in the Black Sea. These materials will soon be made public."
Russian Foreign Ministry spokeswoman Maria Zakharova said on Facebook that the incident was characteristic of Ukrainian behavior: provoke, pressure and blame for aggression.
Though a 2003 treaty designates the Kerch Strait and Sea of Azov as shared territorial waters, Russia has been asserting greater control over the passage since 2015.
Ukraine's Foreign Ministry said in a statement that Russia's actions "have transgressed all boundaries and become aggressive ... [and] demand clear reaction of international community."
"We consider such aggressive actions as a violation of the norms of the UN Charter and the United Nations Convention on the Law of the Sea," the statement went on. "Ukraine will take all appropriate measures to ensure diplomatic and legal response."
Dmitry Kiselyov, a commentator on the state-controlled Rossiya channel, told viewers on his Sunday evening news program that Ukrainian President Petro Poroshenko -- encouraged by the U.S. -- has been looking to pick a fight with Russia in the Black Sea.
The Associated Press contributed to this report.
Source>https://www.foxnews.com/world/russian-ship-fires-on-ukrainian-vessels-in-black-sea-ukraine-says
Posted by theodore miraldi at 4:24 PM