SEXIST Dem Campaign, GRAB THEM BY THE ... You Know What!

In another attempt to show the American Public Just How Stupid Liberal Narratives truly are; #GRABTHEMBYTHE ... You Know What, is really what they meant! After all, Exposing Yourself for Votes will become the New Policy Agenda to Teach Your Children. What's Next, a Naked Pelosi and Waters...UGH!!
...tmiraldi 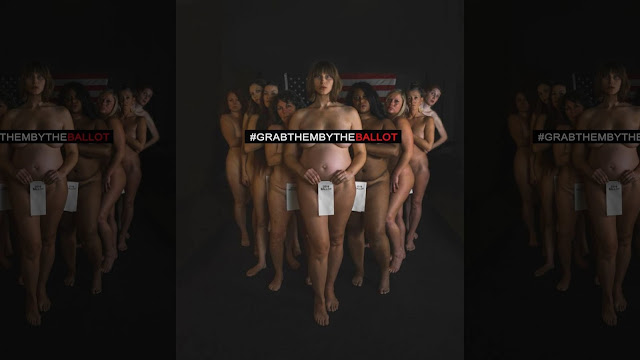 
The Democratic Party’s efforts to retake control in the upcoming midterm elections have been reinforced by a group of progressive women posing completely nude in a bid to encourage people to vote for the party.
Ten women from Vermont participated in the “Grab Them By The Ballot” shoot titled after President Trump’s infamous “grab them by the p----” comment that resurfaced during the 2016 presidential election.
All of the women – who came in all sizes, races, and sexualities – posed with nothing but a ballot placed on their private parts in an homage to the #MeToo movement.
“With the #Metoo and #Wetoo movements and recent confirmation of Brett Kavanaugh there is much at stake in the upcoming elections,” said the group in its mission statement.
“We are here to show the country these recent events have served to strengthen our resolve to bring about change within the system through exercising our right to vote. We aim to encourage voter turnout in the upcoming November elections,” the group added.
Harvard Law-educated attorney Dawn Robertson, who organized the shoot, told The Sun that the project was aimed at encouraging people to vote for Democratic candidates and oppose the Republicans.
“What the Republicans are doing to transgender rights, the way they are attacking women's reproductive rights and the collective trauma means that women are really coming to the forefront now,” she said.
“I hope that the pictures encourage women and marginalized communities to vote. I want them to know that their voice matters.”
A Jewish transgender woman, who goes by the initial Z, took part in the shoot to point out how the transgender community suffered under the rule of Republicans.
“Donald Trump's administration is aggressively trying to define transgender, intersex, and gender non-conforming people out of existence,” she told the Daily Mail.
“I'm optimistic that this photoshoot will serve as a starting point for more women to claim their bodies."
The Trump administration recently came under scrutiny amid reports it is considering a roll back of Obama-era recognitions and protections that broadened the definition of gender.
The Department of Health and Human Services (HHS) is reportedly looking into establishing the legal definition of sex under Title IX as a biological, immutable condition determined by genitalia at birth. If the change goes ahead, around 1.5 million Americans who identify as transgender could lose some legal protections.


The Midterm elections will take part next week on Tuesday, with pollsters indicating that Democrats have a considerable chance to retake the House, though Republicans are likely to increase their Senate majority.
Source>https://www.foxnews.com/politics/women-pose-naked-in-grab-them-by-the-ballot-photo-shoot-to-encourage-votes-for-democrats