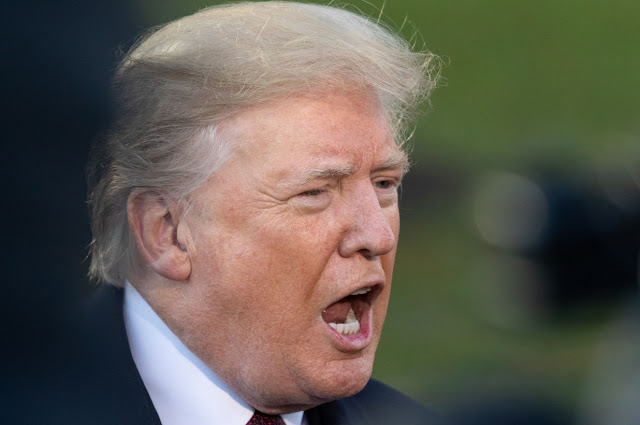 
WASHINGTON – President Trump issued a Thanksgiving Day threat to close the “whole” southern border if Mexico can’t control the migrant caravan, which the president claimed is filled with at least “500 serious criminals.”
“If we find that it’s uncontrollable,” then “we will close entry into the country for period of time until we can get it under control. The whole border,” Trump told reporters at Mar-a-lago Thursday.
Citing unrest from the migrant caravan in Tijuana, Mexico, Trump threatened to halt commerce with Mexico if the southern ally doesn’t clamp down on the caravan.
“We will close the border and that means that Mexico’s not going to be able to sell their cars into the United States until it’s open,” Trump said.
The president, who made the caravan a top midterm issue and even sent 5,900 active duty troops near the border, also claimed that he already blocked parts of border “two days ago” because the situation was “out of control.”
“They called me up. I signed an order,” Trump asserted.
Pressed by reporters to see the Department of Homeland Security order, Trump shrugged it off: “You don’t need it. It’s not that big of a deal.”
The president said he gave the military the “OK” to use force against migrants seeking asylum in the US if necessary.
“If they have to, they’ll use lethal force,” the commander-in-chief said.
He also threatened to shut down the government in December if Congress doesn’t give him enough money to build his border wall with Mexico. A shutdown “could happen over border security,” the president said.
In a wide-ranging question and answer session with reporters, president also asserted the CIA didn’t conclude that Saudi Arabia’s Crown Prince Mohammed bin Salmanordered the murder of Washington Post journalist Jamal Khashoggi and cited lower oil prices and an arms deal as reasons not to punish Saudi Arabia.
“Whether he did or whether he didn’t, he denies it vehemently,” Trump said of the killing of Khashoggi.
The powerful crown prince “hates it more than I do,” Trump said.
Asked who should be accountable for the murder, Trump offered this: “Maybe the world should be held accountable because the world is a vicious place.”
The president also defended his daughter Ivanka’s use of personal email while working for the White House as “very innocent” and said it’s very different than Hillary Clinton’s deletion of thousands of emails on her private server.
The president continued his rant against the independent judiciary on Thanksgiving, calling the 9th Circuit Court of Appeals in San Francisco a “big thorn in our side.”
Trump also expressed optimism for working out a trade deal with China and finding peace in Afghanistan, saying the US is engaged in “very strong negotiations.”
As for more shake-ups in his Administration staffing, Trump said he’ll probably have a “couple” of changes. He claimed his former staffers have gone on to great success, and gave a special shout out to his former communications aide Hope Hicks, who is now head of corporate communications for New Fox.
Source>https://nypost.com/2018/11/22/trump-if-mexico-doesnt-control-the-caravan-im-closing-the-border/
Posted by theodore miraldi at 1:56 PM