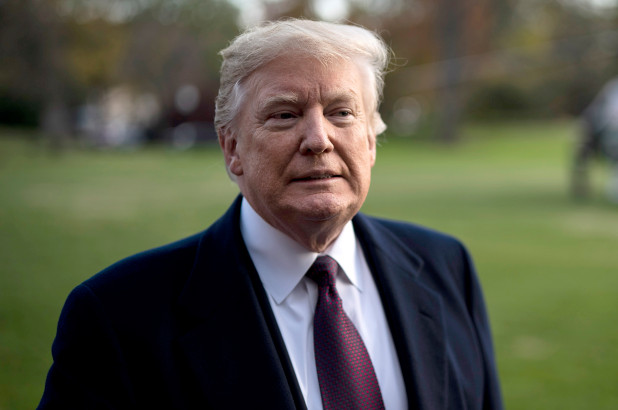 
In a wide-ranging, exclusive interview with The Post, President Trump said Wednesday that if House Democrats launched probes into his administration — which he called “presidential harassment” — they’d pay a heavy price.
“If they go down the presidential harassment track, if they want go and harass the president and the administration, I think that would be the best thing that would happen to me. I’m a counter-puncher and I will hit them so hard they’d never been hit like that,” he said during a 36-minute Oval Office sitdown.
The commander-in-chief said he could declassify FISA warrant applications and other documents from Robert Mueller’s probe — and predicted the disclosure would expose the FBI, the Justice Department and the Clinton campaign as being in cahoots to set him up.
“I think that would help my campaign. If they want to play tough, I will do it. They will see how devastating those pages are.”
But Trump told The Post he wanted to save the documents until they were needed.
“It’s much more powerful if I do it then,” Trump said, “because if we had done it already, it would already be yesterday’s news.”
Trump revealed his playbook just as Democrats are set to take over House committeesin January where they are poised to investigate his potential business conflicts of interests, tax returns, Russia dealings and more.
With the GOP losing power in January, its congressional investigations into alleged Department of Justice misconduct in launching the Russia probe is expected to fizzle out.
In September, a group of Trump allies in the House – led by Rep. Lee Zeldin of New York – called on Trump to declassify scores of Justice Department documents they believe undercut the start of the Russia investigation and show bias against Trump.
The documents include Justice officials’ request to surveil Trump campaign adviser Carter Page and memos on DOJ official Bruce Ohr’s interactions with Christopher Steele, the author of a controversial dossier that alleged Trump ties with Russia.
Trump initially agreed to declassify the documents, including text messages sent by former FBI officials James Comey, Andrew G. McCabe as well as Peter Strzok, Lisa Page and Ohr. Trump allies believe the revelations will show favoritism toward Hillary Clinton and a plot to take down Trump.
Trump then reversed course, citing the need for further review and concern of US allies.
Trump added Wednesday that his lawyer Emmet Flood thought it would be better politically to wait.
“He didn’t want me to do it yet, because I can save it,” Trump said.
The president also pushed back on the notion that all the Justice Department documents should eventually be released for the sake of transparency.
“Some things maybe the public shouldn’t see because they are so bad,” Trump said, making clear it wasn’t damaging to him, but to others. “Maybe it’s better that the public not see what’s been going on with this country.”
Source>https://nypost.com/2018/11/28/trump-threatens-to-declassify-devastating-docs-about-democrats/
Posted by theodore miraldi at 9:18 AM