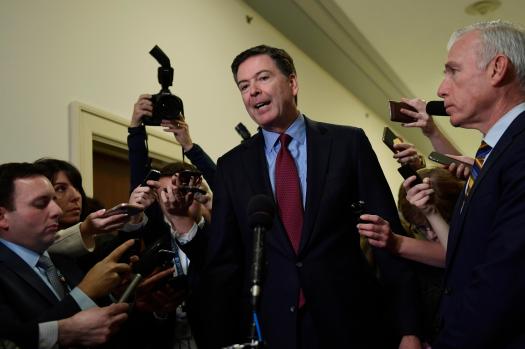 Dirty cop Comey’s playing hide and seek with the truth, once again.
In his Congressional testimony before the House Judiciary and Oversight Committees last week, fired FBI Director James Comey claimed he “can’t remember,” “can’t recall” and “doesn’t know” — 245 times — when asked key questions involving two of the biggest FBI cases in American history he oversaw while running the agency.
The notion that he can’t remember material information defies plausibility, especially since we know Comey went to great lengths to craft detailed memos documenting his private conversations in painstaking detail with the president, and then wrote a book about it.
For Comey to now claim ignorance about facts involving the FBI’s counter intelligence investigation into the 2016 Trump campaign, including who paid for the dirty dossier, and what roles were played by Hillary Clinton’s campaign and the Democratic National Committee, strains credibility.
No surprise Trump blasted his nemesis on Twitter Sunday.
“On 245 occasions, former FBI Director James Comey told House Investigators he didn’t know, didn’t recall or couldn’t remember things when asked. Opened investigations into 4 Americans (not 2) – didn’t know who signed off and didn’t know Christopher Steele. All lies!”
Indeed. We’d be hard pressed to find anyone who believes the head of the FBI didn’t know about Christopher Steele’s relationship with the agency when the FBI hired and paid the ex-British spy, using him as an official CHS (confidential human source). It was also the FBI who fired Steele for lying and leaking sensitive information to the press.
For Comey to feign ignorance on all this is — at best — selective amnesia.
Clearly when he wants to make millions cashing in on an anti-Trump tell-all Comey has sharp recollections of conversations and events —including frivolous minutiae about Trump’s tan lines, as highlighted in his tome — but when it comes to revealing Foreign Intelligence Surveillance Act abuses to spy on Americans and police state like tactics used by his scurrilous squad to target political opponents— he somehow “can’t remember.”
Comey’s failed memory provides further evidence we need the appointment of a new special counsel to get to the bottom of it all. A failure to do so — and hold lawbreakers accountable — will further erode American’s trust in our judicial system. Let’s just hope Trump’s newly nominated attorney general (former Attorney General William Barr) doesn’t go missing in action like ousted Jeff Sessions.
Only time will tell.
Source>https://www.bostonherald.com/2018/12/09/comey-cant-recall-squat/

Posted by theodore miraldi at 5:53 PM