MS-13 Had a Really BAD Year, Thanks to Trump DOJ, Local Police


The ongoing state and Trump administration crackdown against MS-13 in one of their most infamous strongholds has taken such a toll on the gang that they've only been linked to a single murder in the area during 2018.
Police in Long Island – a part of New York that has been a hotbed for violent crime at the hands of MS-13 – told Newsday that four homicides recorded there in 2018 appeared to be linked to the gang, down from 14 the year prior. Yet only one of those murders is said to have occurred this year. The other three cases were killings believed to have happened in 2015 and 2017, but they were counted in 2018 totals since the bodies were found within the past 12 months.
“Suffolk County has waged war against MS-13 and our comprehensive strategy to eradicate this violent gang from Long Island is working," the Suffolk County Police Department told Fox News in a statement Monday. "This dramatic reduction is a result of great policing, expanded community outreach and leveraging governmental partnerships to bring in additional resources to combat gang violence.” 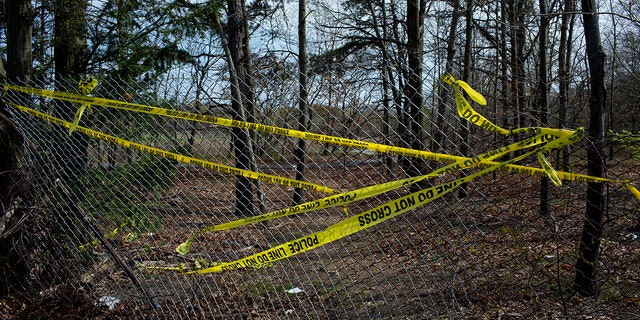 The scene at the Recreation Village Town Park in Islip, N.Y., after four teenagers were brutally murdered by a group that attacked them with machetes in April 2017. Many suspect that the gang MS-13 was involved. (Getty)
Six of the 14 homicides on Long Island last year connected to MS-13 happened in Suffolk County, according to Newsday.
The one murder MS-13 is suspected to have committed on Long Island this year happened just days ago, on Dec. 18 in Nassau County. The body of Harold Sermeno, a 17-year-old, was found in a picnic area behind a community center near Lawrence, a village that borders New York City. Investigators say Sermeno was shot multiple times.
Officials reportedly believe his murder is tied to the Dec. 22 killing of Ian Michel Cruz, who was found dead in a park in Far Rockaway, a neighborhood adjacent to Lawrence and within the New York City limits. Five people were arrested following the death of Cruz, who also was shot multiple times. Police suspect both men were lured to the parks with the promise of sex, according to the Long Island Herald.
Trump, in a visit to Long Island last summer, vowed to “liberate our towns” from MS-13’s grip, and he has a made a crackdown on the gang one of the focal points of his administration.
“We will find you, we will arrest you, we will jail you and we will deport you,” Trump has said, garnering applause from an audience of law enforcement officials.
ICE agents detain a suspected MS-13 gang member and Honduran immigrant at his home in Brentwood, N.Y., in March.
U.S. Immigration and Customs Enforcement agents remain active on Long Island and have been arresting suspected MS-13 gang members. Residents say increased police checkpoints in hard-hit communities, such as Brentwood in Suffolk County, are easing fears as well.
MS-13’s motto is “mata, viola, controla” – which means "kill, rape, control," according to Robert Hur, an official with the Justice Department.
The gang was started by Central American immigrants, mainly from El Salvador, in Los Angeles in the 1980s. It has expanded since to include Hondurans, Guatemalans, Mexicans and other Central and South Americans.
MS-13 recruits are typically middle- and high-school students, predominantly in immigrant communities, who are said to risk violent retribution if they leave the gang.
Authorities estimate the group has tens of thousands of members across several Central American countries and many U.S. states. MS-13's presence is higher in the western and northeastern parts of the U.S., according to the FBI.
Fox News' Kaitlyn Schallhorn and the Associated Press contributed to this report.
Source>https://www.foxnews.com/us/ms-13-crackdown-nearly-halts-violent-gangs-spree-of-murders-in-new-york-stronghold-data-shows
Posted by theodore miraldi at 5:12 PM