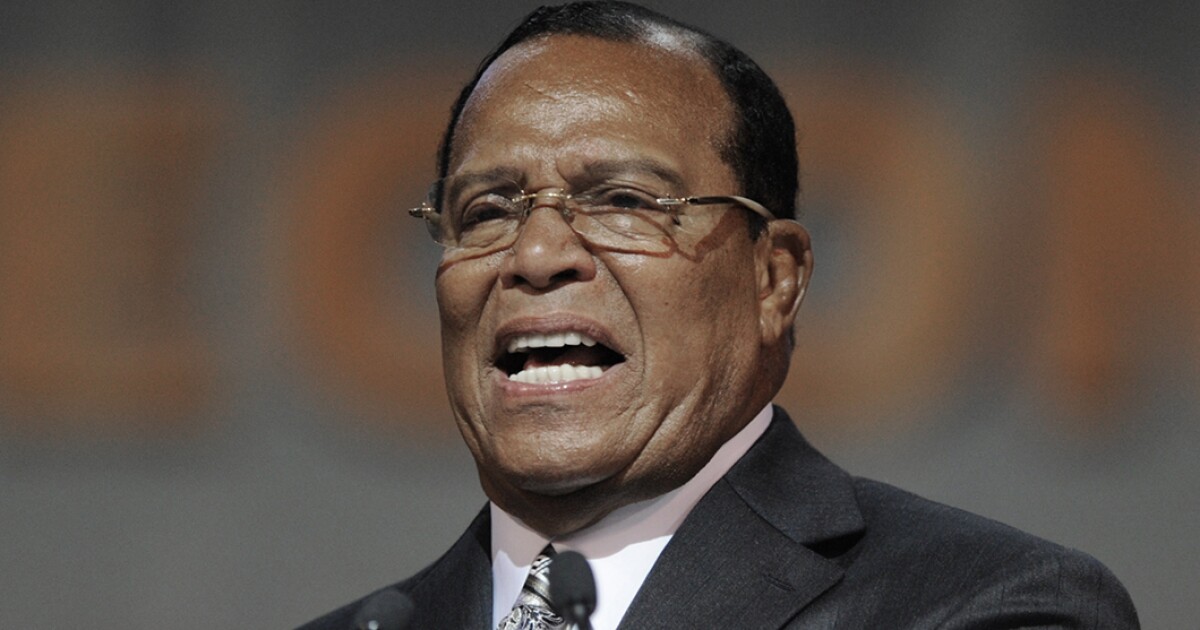 
The Nation of Islam and its leaders have received hundreds of thousands of dollars from the U.S. government since 2008 to teach religious study programs for federal prison inmates, according to records reviewed by the Washington Examiner.

A black nationalist group led by Louis Farrakhan, the Nation of Islam preaches that white people are “blue-eyed devils” and Jews are “the synagogue of Satan." Its leaders have received at least $364,500 in contracts and awards from the U.S. Bureau of Prisons and the Department of Justice between fiscal 2008 and fiscal 2019.

New York Republican Peter King, chairman of the House Homeland Security Subcommittee on Counterterrorism and Intelligence, told the Washington Examiner the funding was "beyond the pale."

He said: "Categorically, no group or entity or individual associated any way with Farrakhan or the Nation of Islam should receive any federal funding. What Farrakhan preaches is hatred and anti-Semitism and racism, and to use any federal money for any group that’s he’s involved with that do any type of teaching or proselytizing is just wrong."

Mark Potok, a senior fellow at the Centre for Analysis of the Radical Right, called the funding "really outrageous and remarkable." He noted that a court ruling in 2003 prohibited federal prisons from banning Nation of Islam reading materials on First Amendment grounds. But he said this ruling doesn’t require the U.S. government to provide money to the organization.

"I can’t imagine the reason why the federal government would have any obligation to give any money to the Nation of Islam or its proponents, and it seems quite incredible if they do," said Potok.

The Bureau of Prisons on Wednesday declined to provide any details about the contracts, including what year they began and what Nation of Islam reading materials were used for the program. “Contracts are retained six years after final payment, so we are not able to provide details regarding the original contract on which the Nation of Islam began contracting with the Bureau of Prisons," said a spokesperson.

The spokesperson cited a regulation that federal correctional institutions "may contract with representatives of faith groups in the community to provide specific religious services which the chaplain cannot personally deliver due to, ordinarily, religious prescriptions or ecclesiastical constraints to which the chaplain adheres."

While declining to comment on what the Nation of Islam provided to prisoners, the bureau cited a federal statute that said religious materials must “be previewed by [Bureau of Prison] staff, or any other staff-designated volunteers, prior to distribution" and "materials shall not denigrate or disparage any other religion or religious groups.”

King said the funding raises concerns about the federal vetting process for prison chaplains in light of reports that prisons can be a breeding ground for radicalization.

In 2010, the Senate Foreign Relations Committee released a report that found "as many as three dozen U.S. citizens who converted to Islam while in prison have traveled to Yemen, possibly for Al Qaeda training." The issue has drawn recent attention in Europe, after a gunman who attacked visitors at a Christmas market in France was reported to have been radicalized during a prior stint in jail.

“Since there have been too many instances of radicalization occurring in prisons, that, to me, is a public concern as to what is being taught,” King said. "To me, once you’re associated with Farrakhan, that, to me, would end the vetting right away."

Federal spending records reviewed by the Washington Examiner show that the funding dates back at least to fiscal 2008, with some contracts apparently approved in 2007.

The highest spending year appears to have occurred under former President Barack Obama in 2012, when the federal government gave over $47,000 in contracts to Nation of Islam programs. Funding has dropped under the Trump administration. In 2018, the programs received $17,000 and the total obligation for 2019 is $8,250.

The Nation of Islam was founded in 1930 as a black nationalist offshoot of Islam, but Potok said many of its beliefs are seen as heretical by mainstream Muslims — including the group’s claims that white people are inherently evil and Nation of Islam founder Wallace D. Fard, or Wallace Fard Muhammad, is a deity.

"The Nation has, right from the beginning, extremely anti-Semitic, anti-gay beliefs," said Potok. The group has promoted theories that Israel carried out the Sept. 11, 2001, terrorist attacks and claimed the U.S. government has secretly poisoned black men with a chemical that would turn them gay. Farrakhan, who has led the organization since 1978, once called Adolf Hitler ‘a very great man’ and routinely denounces Jews and white people as evil.

"White folks are going down. And Satan is going down. And Farrakhan, by God's grace, has pulled the cover off of that satanic Jew, and I'm here to say, 'Your time is up. Your world is through,'" Farrakhan said in a speech last February.

One of the organization’s key texts, The Secret Relationship Between Blacks and Jews, claims that Jews were responsible for the transatlantic slave trade and rigged the world economic system to disenfranchise black people.

The Nation’s corporate entity, Muhammad’s Holy Temple of Islam Corp., received $27,000 from the Bureau of Prisons to carry out ‘Nation of Islam religious services’ at Terre Haute penitentiary in Indiana, according to government records.

Muhammad’s Holy Temple of Islam is based out of Mosque Maryam in Chicago, the Nation’s national headquarters and Farrakhan’s office.

The chapter’s recent “video of the week” on its website was titled “SOS: Synagogue of Satan.”

“The Honorable Minister Louis Farrakhan wants you brothers to know that he loves you,” said Abdullah Muhammad during the lecture, which reportedly focused on Bible Scripture and included a video address from Farrakhan.

One of the inmates said in an interview with the Final Call: “I’m only 19 years old and I go home in about three weeks. I wish Mr. Muhammad lived in Detroit."

Farrakhan has implored his followers not to accept money from the U.S. government, saying in a Dec. 14, 2013, statement: “If they offer you anything, look carefully into it, lest the Nation will no longer be tied to the principles that the Hon. Elijah Muhammad desired for us: to make us an independent nation on some of this Earth that we can call our own.”

Posted by theodore miraldi at 3:34 PM