Ryan Is RIGHT: California’s Election LAWS Are VULNERABLE To Fraud

Watching every single contested congressional race flip from Republican to Democrat days after the election is, as Paul Ryan put it, weird. Here are six reasons California's election laws are deeply flawed. 
Outgoing House Speaker Rep. Paul Ryan (R-Wisconsin) made headlines Thursday morning when he said GOP losses in the state of California were suspicious at a Washington Post Live event.
“California just defies logic to me,” Ryan said about the Golden State’s election results. “We were only down 26 seats the night of the election, and three weeks later, we lost basically every California contested race. This election system they have — I can’t begin to understand what ‘ballot harvesting’ is.”
“Do you think there’s something wrong with it?” WaPo’s Paul Kane asked.
“No, I just think it’s weird,” Ryan replied.
In response, California’s secretary of state, Alex Padilla condemned Ryan’s remarks and defended California’s election laws.

.@SpeakerRyan, in California we make sure every ballot is properly counted and accounted for. That's not “bizarre,” that's DEMOCRACY.https://twitter.com/thehill/status/1068185072015155200 … 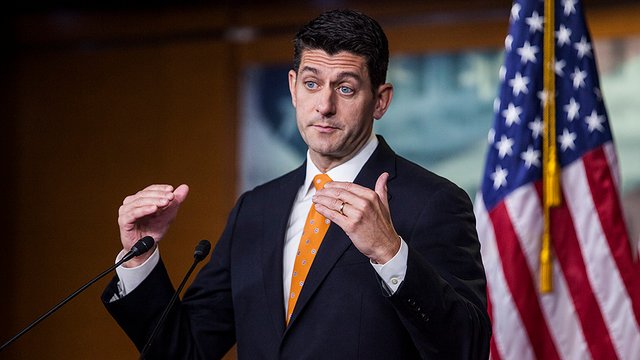 
3,297 people are talking about this
Twitter Ads info and privacy
Ryan isn’t the only Republican to scratch his head over this. Six Republican candidates were leading in congressional races across California on Election Night, only to see the results flip to Democratic victories weeks later due to California’s lax election laws.
In California’s 39th Congressional District, Republican candidate Young Kim was widely anticipated to snag an electoral victory and fill outgoing Rep. Ed Royce’s shoes, becoming the first Korean-American woman to serve in Congress. On election night and the next day, she held a wide lead ahead of Democrat Gil Cisneros. While waiting for the official ballot tally, Kim flew to Washington D.C. to attend orientation events for freshmen members of Congress, including the class photo op, but as ballots continued to pour in up to a week after the election, the results flipped and she ultimately lost. 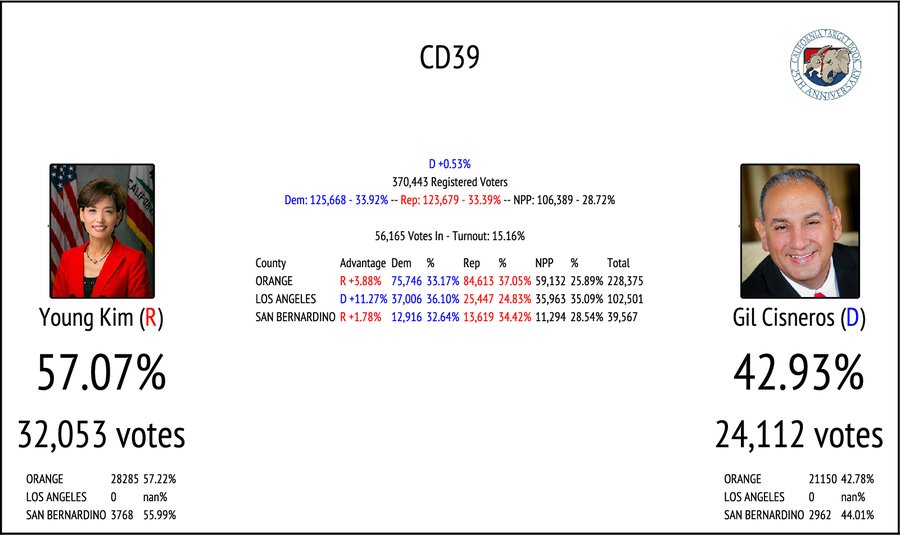 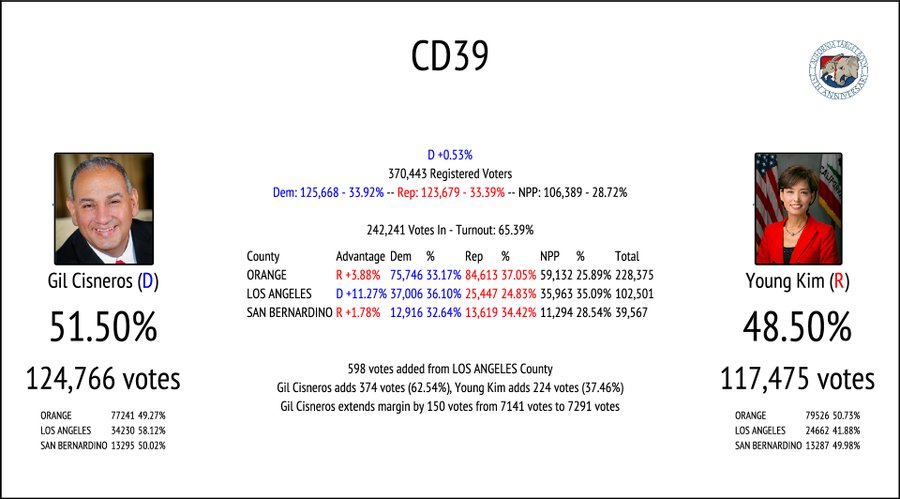 Watching every single contested congressional race flip from Republican to Democrat days after the election is, as Ryan put it, weird. While Here are six reasons California’s electoral system is deeply flawed.
1. The DMV automatically registers people to vote, even illegal immigrants.
Virtually everyone who interacts with the state’s DMV gets automatically registered to vote under California’s Motor Voter program, but this program is riddled with errors and has even registered illegal immigrants. In September, the Los Angeles Times reported that 23,000 voters were registered incorrectly by the DMV. Less than a month before the election, DMV officials revealed that an additional 1,500 people were registered to vote when they should not have been, including some illegal residents, minors too young to vote, and felons who were supposed to be ineligible.
2. ‘Ballot Harvesting’ allows political operatives to drop off other people’s ballots.
A new state law allows third parties to pick up ballots and drop them off at polling locations on behalf of that person, a practice known as “ballot harvesting.”
In video footage that surfaced last month, a woman who identifies herself to a California resident as Lulu is seen knocking on someone’s door and offering to deliver their absentee ballot, but “only to, like, people who are supporting the Democratic Party.”
In an e-mail to supporters, Orange County GOP chair Fred Whitaker attributed the party’s losses in longtime Republican districts to ballot harvesting, the San Fransisco Chronicle reported.

‘The number of election day vote-by-mail drop-offs was unprecedented — over 250,000. This is a direct result of ballot harvesting,’ Whitaker wrote. ‘That directly caused the switch from being ahead on election night to losing two weeks later. … We have to develop a response to this new law that allows us to remain competitive while recognizing the realities of Republican voter attitudes towards handing over their ballot.’

In his remarks Thursday, Ryan singled out this practice as a contributing factor to the GOP losses, saying they were confusing and bizarre. Watching the woman in the aforementioned video say she’s collecting ballots but only for Democratic voters is definitely odd and emphasizes how those picking up the ballots have an incentive to mess with them.
What would a ballot collector working on behalf of a liberal group do to a ballot cast by someone who answered the door wearing a “Make America Great Again” hat? Would that ballot actually get taken to the polls, or tossed in the trash?
And what about low-information voters who hadn’t been planning to cast a ballot? If someone showed up at their door asking for their ballot, would they feel obligated to quickly fill it out and give it to them? There seems to be very little benefit for the actual voter (I mean, how hard is it to drop a filled-out ballot in one’s mailbox on election day?) and a huge incentive for the “harvester” to act shady.
3. California allows voters to register to vote and cast a ballot on Election Day.
That’s right. On Election Day, one can show up to a polling location and register to vote and cast a ballot all on the same day by taking advantage of the Conditional Voter Registration process, which is explained in this YouTube video featuring millennials with pastel-colored hair who could not get it together and register to vote on time like the rest of us.
4. Voters can cast a ballot at the “wrong” polling place.
California allows provisional ballots, which are essentially regular ballots that get put into a special envelope before they’re stuffed into the box. These are for people who show up at the “wrong” polling location or who changed their mind about voting by mail but want to vote anyway, according to California’s Secretary of State website. These ballots are then supposed to be checked against other rolls to make sure the person did not vote twice, but there are reasons to doubt the state’s ability to properly execute this.
5. Counties are allowed to mail absentee ballots to every voter in the county.
“This election, every voter in Madera, Napa, Nevada, Sacramento and San Mateo counties received an absentee ballot — whether they requested one or not,” Shawn Steel writes for The Washington Times. “Beginning in 2020, every county in California except one will be allowed to follow suit.”
6. Absentee ballots that arrive a week later will still be counted.
Unlike most other states, absentee ballots cast in California do not need to be delivered by Election Day, but merely postmarked on that day. This means absentee ballots can come pouring in up to a week later and alter the outcome of the election.
While a number of these programs and laws certainly make it more convenient for voters, they also create a nightmare scenario for quick election results tallying and a number of vulnerabilities in the integrity of the electoral system. Mailing a ballot to every voter in the county, allowing these ballots to arrive up to a week after Election Day, and allowing individuals to register to vote and cast a ballot on the day of an election give ample opportunity for an individual intent on committing voter fraud to do so.
California needs to rethink its program that has enabled an unknown number of illegal immigrants and minors to be improperly registered to vote. It needs to tighten deadlines on voters in order to get a quicker count that doesn’t take weeks to tabulate.

Fortunately, there haven’t been reports of widespread fraud that would necessitate drastic measures to ensure the results were legitimate. But after the debacle in Florida,watching every single contested congressional race flip from red to blue weeks later is not a good look. California’s legislature and secretary of state need to take Republican concerns about election integrity seriously.