2018 Wasn’t Even Close to the WORST YEAR EVER 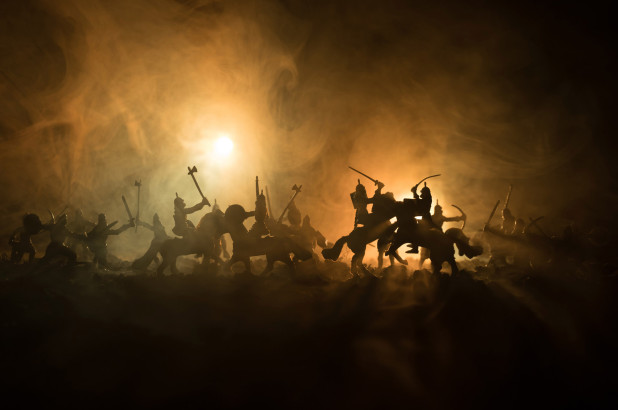 Feeling down? Struggling to cope? Does life feel like a “Game of Thrones”? Well, perhaps your worries really are just first-world problems.
Throughout history, our ancestors have had more pressing concerns. Finding wild weather a problem? How about 18 straight months of fog? Supermarket prices getting too high? How about watching all your crops wither and die?
Constantly catching some new bug? How about contending with the Black Plague? Sick of government leadership slip-ups? How about the collapse of civilization itself?
Put it all together, and you get a date: 536 AD.
Harvard University medieval historian Michael McCormick has set out to find out just how bad things were, and what caused it all. He’s come up with some answers.
“It was the beginning of one of the worst periods to be alive, if not the worst year,” McCormick says.
It was the darkest moment of the Dark Ages. Now we know why. And when things started to get better again.

Blank and pitiless as the sun

Times weren’t great. The Western Roman Empire had collapsed 60 years earlier when Emperor Romulus was defeated by the Germanic warlord Odoacer.
Without the central rule of law, Rome’s old provinces throughout Europe became increasingly isolated. Infrastructure such as aqueducts, public baths and roads were failing. The highways were thick with brigands. Local strongmen surged forward to fill the power vacuum.
But things were about to get much, much worse.
McCormick told the American Association for the Advancement of Science that 536 may not have been the exact worst year — but it was the year things fell apart.
The next decade would be a living hell. The results of his study were published in the journal Antiquity. It was as if the gods had abandoned Europe, China — and much of the land in between. A mysterious fog rolled over Europe, the Middle East and parts of Asia.
It did not lift.
For 18 months it sat there — plunging the lands into darkness.
“And it came about during this year that a most dread portent took place,” wrote Byzantine historian Procopius. “For the sun gave forth its light without brightness, like the moon, during the whole year.”
It was just the start. The following decade would be the coldest recorded for at least 2,300 years. But, in 536, snow would fall in summer. Crops withered and died. People starved — en masse. What caused it all has long been unknown.
But a 1990s analysis of the growth of tree rings during the era proved the historic records: The summers around 540 AD were certainly very cold, severely stunting trees’ growth.

Mere anarchy is loosed upon the world


Rome’s Western Empire may have collapsed. But the Eastern Empire still stood. Emperor Justinian the Great seemed firmly ensconced. He was in the 10th year of his — until then — prosperous reign.
Then, the skies grew dark.
“And it seemed exceedingly like the sun in eclipse, for the beams it shed were not clear nor such as it is accustomed to shed,” Procopius described.
Elements of the thriving network of international trade established over the past 600 years lingered. Nations and provinces still relied upon each other for vital resources.
After 536, this would not last. But it would contribute to making things worse.  The bubonic plague began its relentless march. Among people and animals already reeling from starvation, the Black Death would extract a terrible toll. And the disease-carrying parasites would spread far and wide, carried by ships, wagons and travelers.
In 541, the Roman port of Pelusium in Egypt became the first major population center to be brought to its knees by the plague. The following Plague of Justinian killed up to half of the entire population of the Eastern Roman Empire — bringing on its collapse.
Europe, the Middle East and much of Asia fell into economic and societal collapse that would last just over a century.
It was what would commonly become known as the Dark Ages. Entire peoples would uproot and swarm across Europe, seeking new lands to plant their crops.
It was the era that spawned legends such as that of King Arthur — with lingering memories of a lost golden age, and a yearning for a hero to bring back the good times.

Some revelation is at hand

How things got so bad, so fast, has long puzzled historians.
Was the Roman Empire simply too corrupt to survive? Were the “barbarians” stampeding and ravaging their way across Europe? And what was the cause of that choking cloud of fog?
McCormick and his team say they now have an answer.
Careful analysis and dating of ice cores exposed evidence of an event that sparked the global catastrophe. Volcanic ash. Vaporized glass. Sulfur. Bismuth. All were blasted high into the sky, creating a thin film reflecting sunlight back into space.
Glaciologist Paul Mayewski of the University of Maine says the ash appears to have come from a volcano in North America, or perhaps Iceland. It blew — big time — in early 536. It spewed ash across the entire Northern Hemisphere. But that wasn’t the end of it.
The volcano erupted twice more — in 540 and 547. The consequent ash clouds served only to revitalize the climate-changing impact of the first. But the ice core reveals more.
Each tree-ring-like layer of ice acts like nature’s logbook of what was happening at the time.
Among those layers associated with 640 AD was found a sudden spike in particulate lead. And historians knew where that came from.
Industry had revived. Economies had fired up. The wheels of trade had begun to roll again. And greasing it all was the flow of freshly minted silver coins — the processing of which produced the lead pollution.

The darkness drops again, but now I know


McKormick’s team found microscopic particles of volcanic glass in a Swiss glacier dating from 536. Ice cores and tree rings from Greenland and peat bog cores from elsewhere in Europe also contained similar particles.
Indications are they came from a volcano in Iceland, but the samples are too small to be certain. The researchers say they want to examine cores from lakes in Europe and Iceland to identify more fallout from this catastrophic event.
Once identified, there may be clues as to why this particular eruption proved so devastating. Wherever the volcano, the jet-stream winds propelled the plume across Europe and Asia. Beneath it, the chilled fog formed.
The ice also tells the tale of the end of this dark age.
Archaeologist Christopher Loveluck of the University of Nottingham says in Antiquity that the ability to precisely date sample cores was a major breakthrough for historians. Ice cores are proving to be a fantastic resource for inferring what was happening at any given point in history. Each snowfall lands on top of another, building up, layer by layer, ice sheets that capture snapshots of what was in the air for each given season.
The cores reveal the smelting of lead ore to extract silver produced a surge in pollution in 640, and again in 660.
Economies were thriving once again. Gold was becoming scarce for coins. So silver found itself suddenly in great demand.
“This unambiguously shows that, alongside any residual pool of Roman bullion and imported metal, new mining facilitated the production of the last post-Roman gold coins — debased with increasing amounts of silver — and the new silver coinages that replaced them,” the researchers wrote.
Loveluck added: “It shows the rise of the merchant class for the first time.”
It was a golden age set to last 700 years. Then the ice cores tell another tale. Once again, lead vanished from the air. Between 1349 and 1353, the Black Death once again swept through Europe.
Once again economies collapsed. Crops failed. But it wouldn’t prove as bad as 536.