Alexandria Ocasio-Cortez, The VOICE Of An IGNORANT Generation 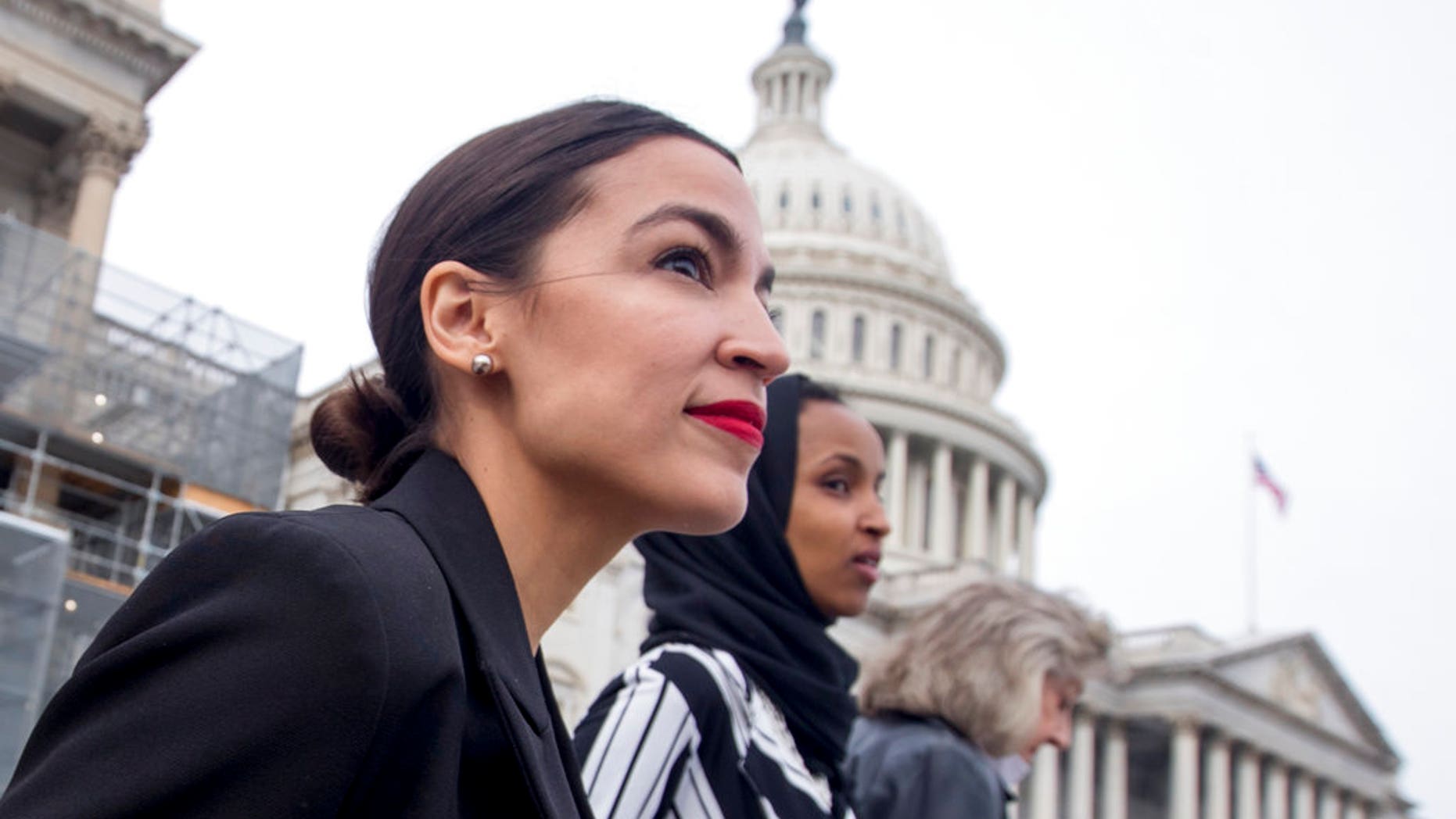 Rep. Alexandria Ocasio-Cortez, D-N.Y., walks down the House steps to take a group photograph of the House Democratic women members of the
116th Congress on the East Front Capitol Plaza on Capitol Hill in Washington, Friday, Jan. 4, 2019. (AP Photo/Andrew Harnik)


The majority of American Millennials identify as socialist, according to surveys by both Reason-Rupe and the Victims of Communism Memorial Foundation. That’s the bad news. The good news is that just 32 percent of Millennials can define socialism. The frequently-wrong but never-in-doubt freshman Congresswoman Alexandria Ocasio-Cortez, D-N.Y., may indeed be the voice of her ignorant generation.
During an interview on CBS’s “60 Minutes,” Anderson Cooper asked Ocasio-Cortez, “When people hear the word socialism, they think Soviet Union, Cuba, Venezuela. Is that what you have in mind?” He neglected to mention the vicious socialist regimes of Cambodia, Ethiopia, Poland, Romania, North Korea, and China, among others.
Ocasio-Cortez retorted, “Of course not. What we have in mind—and what of my—and my policies most closely resemble what we see in the U.K., in Norway, in Finland, in Sweden.” In fact, her economic proposals bear little resemblance to British and Nordic public policy.
ALEXANDRIA OCASIO-CORTEZ, OTHER DEMS WANT YOU TO EMBRACE A SOCIALIST AGENDA - HERE ARE 4 GLARING EXAMPLES
As early as the 1950s, Britain began to privatize its social security and pension programs. By the 1990s, as decades of socialism caused economic growth to stagnate, Sweden followed suit. Neither Sweden nor Norway mandates a minimum wage, and Britain demands a minimum wage well below Ocasio-Cortez’s proposed $15 per hour. Britain and Finland offer a lower corporate tax rate than the United States, and all the nations she names have lower rates than her proposal of 28 percent. None has a health care regime as socialistic as her proposed Medicare-For-All scheme, which constitutes a full federal takeover of health care.
Alexandria Ocasio-Cortez’s ignorance of economics and foreign affairs typifies her generation. Despite holding expensive degrees in both Economics and International Relations from Boston University, Ocasio-Cortez threw up her hands in exasperation during an interview on Margaret Hoover’s “Firing Line” program, laughing, “I’m not the expert on geopolitics.” Fortunately for her, in the land of the blind, the one eyed man is king; and among a blithely ignorant generation, the lightly educated activist is congresswoman.
The seed of Millennial miseducation, which grew into the Tree of the Lack of Knowledge as activist educators substituted ideology for scholarship, is finally bearing its rotten fruit. According to one survey, one third of Millennials believe President George W. Bush killed more people than Soviet dictator Joseph Stalin. Over 40 percent of Millennials have never heard of Mao Zedong; another 40 percent and 30 percent, respectively, are unfamiliar with Vladimir Lenin and Che Guevara. Two-thirds of Millennials cannot identify Auschwitz, and 22 percent have never heard of the Holocaust, twice the percentage of American adults on average.
Millennials might not know much, but according to a 2016 Harvard survey, they know they don’t support capitalism, with 51 percent of young adults rejecting economic freedom.
During the 2018 midterm elections, the Democratic Socialists of America endorsed 42 candidates for local, state, and federal office across 20 states. Of those candidates, 24 won their primary campaigns, and 18 won in general elections. Millennials have largely cheered them on. Raised in the United States after the fall of the Berlin Wall, these young Americans have been sheltered both empirically and academically from the myriad horrors wrought by socialism throughout history. And so the problem worsens.
Socialism is an economic disease born of envy and ignorance. Unfortunately both abound in our present politics. The sickness has found an attractive spokeswoman—perhaps, sadly, the voice of her generation.
Source>https://www.foxnews.com/opinion/alexandria-ocasio-cortez-the-voice-of-an-ignorant-generation
Posted by theodore miraldi at 8:49 AM