He should have had the meeting at the Beach, and hired a Chartered Jet for all of their Family Members at Taxpayers expense.
...tmiraldi 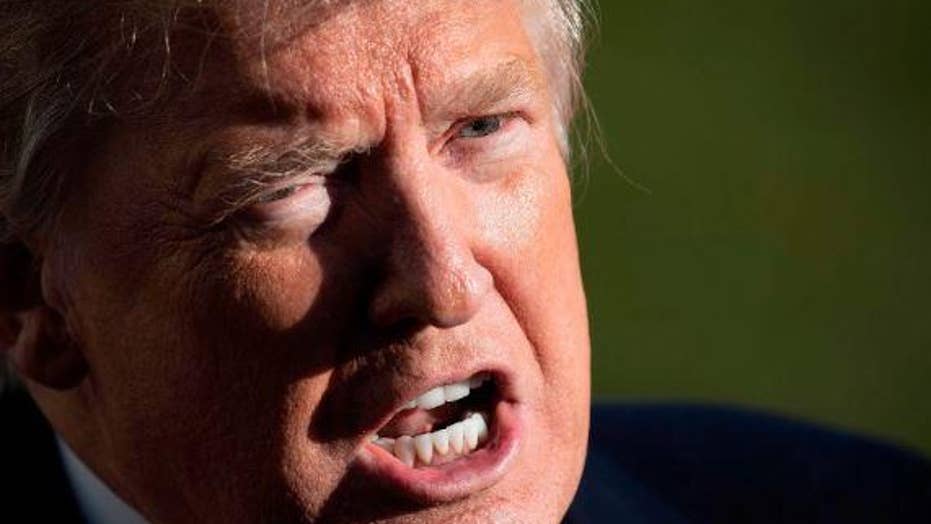 Congressional Democrats on Tuesday rejected President Trump's invitation to a lunch meeting at the White House to discuss border security, in the latest sign that both sides of the government shutdown standoff remain entrenched in their positions with no compromise in sight.
A senior administration official told Fox News that the president had invited Democrats to join his lunch with members of Congress in the Roosevelt Room shortly after noon. But moments before the session, White House Press Secretary Sarah Sanders said in a statement that nobody took them up on the offer.
"The President has a proposal on the table that includes additional technology at ports of entry, allows minors from Central America to seek asylum in their home country, and physical barriers between ports of entry made of steel instead of concrete," she said. "Today, the President offered both Democrats and Republicans the chance to meet for lunch at the White House. Unfortunately, no Democrats will attend. The President looks forward to having a working lunch with House Republicans to solve the border crisis and reopen the government.
"It’s time for the Democrats to come to the table and make a deal."
She said House Speaker Nancy Pelosi and Senate Minority Leader Chuck Schumer "refuse to negotiate."
Trump, however, did not invite Pelosi, instead reaching out to rank-and-file Democrats including centrist Democrats from districts where Trump is popular. A Pelosi aide reportedly said she gave lawmakers her blessing to attend, telling her leadership team that other congressional Democrats can see what she and others have dealt with during the shutdown.
Pelosi predicted that after meeting with Trump, the lawmakers would want to make a "citizen's arrest," according to the aide.
But the lawmakers ultimately decided not to attend. The meeting boycott leaves unclear how and when both sides might negotiate a resolution to the partial shutdown, which was triggered when Trump demanded nearly $6 billion for a border wall and Democrats refused -- and is now the longest in U.S. history.
House Democrats have tried to pressure the Senate to take up bills funding parts of the government, to no avail. Meanwhile, House Majority Leader Steny Hoyer, D-Md., announced Tuesday that if the government remains shut down, the House will not have its planned recess next week.
"If the government is not open, we will not have a recess," Hoyer told reporters on Capitol Hill Tuesday. "That does not mean we will be here every day, members will be on 24 hours notice. We'll have some votes next week...we'll be here next week to do business."
The last White House meeting with Democratic leaders did not end well. Pelosi, D-Calif., and Schumer, D-N.Y., sat down last week with Trump, but Schumer said it ended when the president “just got up and walked out.”
“He asked Speaker Pelosi, ‘will you agree to my wall?’ She said no. And he just got up, and said, ‘Well, we’ve got nothing to discuss,” Schumer said last week.
Pelosi, after the meeting, said the president was “petulant,” and Schumer added that Trump slammed his hand on a table in frustration and had a “temper tantrum”—a move Trump, Vice President Pence and House Minority Leader Kevin McCarthy later denied.
Trump rejected the account, tweeting that “Cryin’ Chuck” Schumer “told his favorite lie when he used his standard sound bite that I ‘slammed the table & walked out of the room. He had a temper tantrum.’ Because I knew he would say that, and after Nancy said no to proper border security, I politely said bye-bye and left, no slamming!”
Trump initially requested $5.7 billion in funding for security and construction of the wall, citing the “humanitarian crisis” and “invasion” at the border as reasons. Democrats have vowed to block any type of spending package that would involve funds to build a wall along the Southern border.
But Trump has continued to press for wall funding, tweeting Tuesday: "A big new Caravan is heading up to our Southern Border from Honduras. Tell Nancy and Chuck that a drone flying around will not stop them. Only a Wall will work. Only a Wall, or Steel Barrier, will keep our Country safe! Stop playing political games and end the Shutdown!"
The president on Tuesday also questioned whether Pelosi should continue getting paid while the standoff drags on -- as Pelosi accused the president of holding the paychecks of hundreds of thousands of federal workers “hostage.”

Why is Nancy Pelosi getting paid when people who are working are not?

78.9K people are talking about this
“@realDonaldTrump, stop holding the paychecks of 800,000 Americans hostage. There is no reason for them to suffering right now. Re-open the government! #TrumpShutdown,” Pelosi tweeted in response.

.@realDonaldTrump, stop holding the paychecks of 800,000 Americans hostage. There is no reason for them to be suffering right now. Re-open the government! #TrumpShutdown


Donald J. Trump
✔@realDonaldTrump
Why is Nancy Pelosi getting paid when people who are working are not?

9,743 people are talking about this


Fox News' Matt Leach and John Roberts and The Associated Press contributed to this report.
Source>https://www.foxnews.com/politics/democrats-boycott-white-house-lunch-meeting
Posted by theodore miraldi at 4:46 PM