DEMS to STRIKE "So Help You GOD" When Taking Oaths

Dems to strike 'so help you God' from oath taken in front of key House committee, draft shows 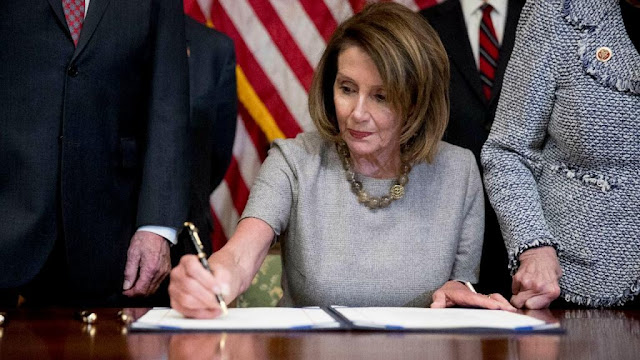 A key committee in the Democrat-controlled House of Representatives is moving to eliminate the God reference from the oath administered to witnesses testifying before the panel, as part of a new rules package expected to be approved this week, according to a draft obtained exclusively by Fox News.
The draft shows that the House Committee on Natural Resources would ask witnesses to recite only, "Do you solemnly swear or affirm, under penalty of law, that the testimony that you are about to give is the truth, the whole truth, and nothing but the truth?"
The rules proposal places the words "so help you God" in red brackets, indicating they are slated to be cut.
The draft rules also remove the phrase "his or her" throughout the document, changing those two pronouns to "their." The rules additionally modify all references to the committee's "Chairman" to instead refer only to the committee's "Chair."
Other rules changes relate to expanding the committee's authority over natural gas in Alaska and fossil-fuel resources.
While many federal oaths include the phrase "so help me God," some -- most notably the presidential oath of office -- do not.
The full committee is set to vote on the new language this week, and the rules would take effect immediately if adopted. Other committees were still in the process of finalizing their rules on Monday.

Republican leaders reacted with dismay to the proposed change, and suggested it was a sign of the Democratic Party's leftward shift.
“It is incredible, but not surprising, that the Democrats would try to remove God from committee proceedings in one of their first acts in the majority," House Republican Conference Chairwoman Liz Cheney, R-Wyo., told Fox News. "They really have become the party of Karl Marx.”
Spokespeople for the Natural Resources Committee did not immediately reply to Fox News' requests for comment. The committee, which has oversight of national parks, wildlife and energy, is chaired by Democratic Arizona Rep. Raul Grijalva.
The proposed change was not the first time Democrats have sought to strike references to God in official party documents. In 2012, the floor of the Democratic National Convention erupted over a sudden move to restore to the platform a reference to God and recognition of Jerusalem as Israel's capital -- after heavy criticism from Republicans for initially omitting them. Democrats, though, were hardly in agreement over the reversal.
A large and loud group of delegates shouted "no" as the convention chairman (then-Los Angeles Mayor Antonio Villaraigosa) called for the vote. Villaraigosa had to call for the vote three times before ruling that the "ayes" had it. Many in the crowd booed after he determined the language would be restored.
Hard-left Democratic Rep. Ilhan Omar is facing backlash and accusations of homophobia after repeating baseless allegations pushed by MSNBC and liberal activists that South Carolina Sen. Lindsey Graham is being blackmailed into supporting President Trump. (AP Photo/Jim Mone)
The battle marked the biggest platform fight in either party's convention, and signaled Democrats were worried the prior language could have been politically damaging in a tight election year.
A senior campaign official told Fox News at the time that then-President Barack Obama personally intervened to change the language in both cases. On the God reference, the official said the president's response was, "Why did it change in the first place?"
The House panel's proposed change comes as far-left progressive Democratic freshman in Congress, including Michigan Rep. Rashida Tlaib and Minnesota Ilhan Omar, have come under fire from Republicans for pushing what they call radical and unfounded religious-based attacks.
Omar, for example, wrote in 2012 that "Israel has hypnotized the world, may Allah awaken the people and help them see the evil doings of Israel." Tlaib was accused of engaging in an anti-Semitic slur earlier this month by suggesting Republican politicians were truly loyal to Israel, not the United States.
Omar and Tlaib made history by becoming the first-ever Muslim women in Congress.
Source>https://www.foxnews.com/politics/dems-move-to-strike-so-help-me-god-from-oath-taken-in-front-of-key-house-committee
Posted by theodore miraldi at 6:56 PM