This Episode in American Politics is no less than an attempted Bloodless, Political Coup by an opposing party. Barack Hussein Obama was its Architect!...tmiraldi 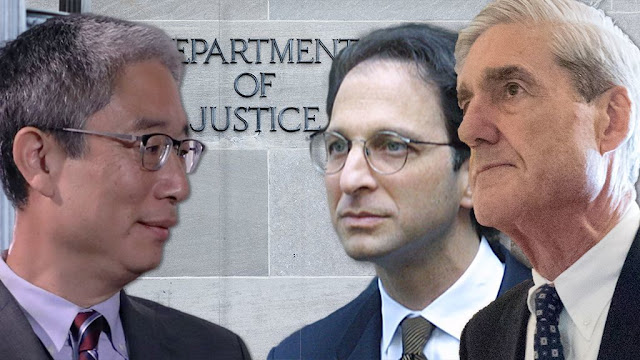 Details about Justice Department official Bruce Ohr's meetings with the author of the salacious anti-Trump dossier were shared by Ohr with his expansive circle of contacts inside the department -- including senior FBI leadership and officials now assigned to Special Counsel Robert Mueller’s investigation, Fox News has learned.
Ohr gave a closed-door transcribed interview last August sharing details of his 2016 meetings with British ex-spy Christopher Steele, who authored the dossier later used to secure a surveillance warrant for a Trump campaign aide. The interview was part of the Republican-led House Oversight and Judiciary Committee probes.
In a series of questions about his meetings with Steele, including one on July 30, 2016, and who he shared the information with, Fox News has confirmed the Ohr transcript stated: “Andy McCabe, yes and met with him and Lisa Page and provided information to him. I subsequently met with Lisa Page, Peter Strzok, and eventually (an FBI agent). And I also provided this information to people in the criminal division specifically Bruce Swartz, Zainab Ahmad, Andrew Weissmann.”
“Andy” is Andrew McCabe, the former FBI deputy director and acting director who left the bureau after the DOJ Inspector General concluded he lied about his role in a media leak about the Clinton Foundation on the eve of the 2016 presidential election. His case is now with the U.S. Attorney in Washington, D.C.  Former FBI Agent Peter Strzok and lawyer Lisa Page, whose anti-Trump texts emerged after the election, left the bureau last year.

The FBI asked Fox News not to disclose the name of the other agent who met with Ohr. The agent later worked on the case against then-National Security Adviser Mike Flynn in January 2017 which helped form the basis of his guilty plea for lying to the FBI.
According to online bios, Bruce Swartz was identified as a deputy assistant attorney general. Andrew Weissmann was chief of the DOJ Criminal Division’s Fraud Section before becoming a senior prosecutor on Mueller's team handling the case of former Trump campaign chairman Paul Manafort. According to a May 2017 New Yorker profile, Zainab Ahmad worked at the U.S. Attorney’s office in the Eastern District of New York and took a leave to work for then-Attorney General Loretta Lynch at the Justice Department’s Washington headquarters. Ahmad is now assigned to the special counsel's investigation.
Fox News asked the FBI, Justice Department and special counsel's office whether the meetings with Ohr over Steele and the dossier were consistent with -- or in conflict with -- existing DOJ or FBI rules, including chain-of-custody procedures for handling evidence. In addition, the special counsel's office was asked whether Weissmann and Ahmad had fully disclosed their contacts with Bruce Ohr and others over the dossier. The FBI and special counsel declined to comment; the DOJ did not immediately respond.
An attorney for Ohr also declined to comment on the interview. An attorney for McCabe did not respond.
The Ohr testimony also seems to conflict with a 2018 memo from Democrats on the House Intelligence Committee, on the surveillance warrant application for Trump campaign aide Carter Page, which relied heavily on the dossier. While Ohr’s testimony indicated he met with senior FBI leadership in August 2016 shortly after a meeting with Steele, the Democrats' memo stated “the Majority mischaracterizes Bruce Ohr’s role, overstates the significance of his interactions with Steele, and misleads about the timeframe of Ohr’s communications with the FBI” saying Ohr told the bureau in November 2016 about his earlier communications with Steele.
During his testimony, Ohr said he stressed during the 2016 meetings, many of which took place before the Page surveillance warrant was obtained, the potential bias and conflicts associated with Steele and the dossier that was commissioned by the DNC and Clinton campaign and handled by the opposition-research firm Fusion GPS. The surveillance warrant application drew on the unverified Trump dossier.

Video
Fox News also confirmed the Ohr transcript stated, “So when I provided it to the FBI, I tried to be clear that this is source information. I don’t know how reliable it is. You’re going to have to check it out and be aware. These guys were hired by somebody relating to – who’s related to the Clinton campaign, and be aware.”
Ohr continued, “I wanted them to be aware of any possible bias, or you know, as they evaluate the information, they need to know the circumstances.”
He went on, “I provided information to the FBI when I thought Christopher Steele was, as I said, desperate that Trump not be elected. So yes, of course, I provided that to the FBI.”
Ohr then was asked: “Were the Department of Justice and the FBI also aware of Glenn Simpson’s bias against Donald Trump?” Glenn Simpson is the co-founder of Fusion GPS. Ohr’s wife, Nellie, worked for Simpson.
Ohr stated: “I certainly told the FBI that Fusion GPS was working with – doing opposition research on Donald Trump.”
Critics have pointed to apparent inconsistencies in Simpson's testimony. During his November 2017 transcribed interview before the House Intelligence Committee, Simpson was asked about his contact with the FBI. He said he worked with Ohr "sometime after Thanksgiving" in 2016. However, Simpson's testimony contradicted Ohr emails that showed they made contact months earlier, in August.
Some details of the Ohr testimony were reported earlier this week by the Epoch Times.
Source>https://www.foxnews.com/politics/bruce-ohr-shared-details-about-meetings-with-anti-trump-dossier-author-with-justice-department-colleagues
Posted by theodore miraldi at 7:27 AM