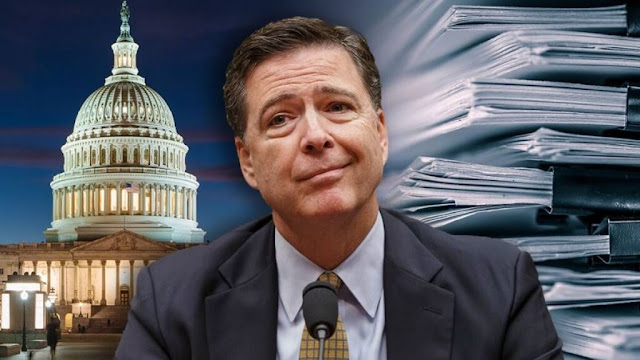 
Dishonesty and corruption are endemic at the Federal Bureau of Investigation.
The latest proof comes in a New York Times report that the FBI initiated an investigation in May of 2017 into whether President Donald Trump was serving as a covert Russian agent.  The accusation itself was ludicrous on its face.  But from a legal standpoint, the FBI's probe constituted an egregious abuse of power.  The Bureau had no probable cause, no evidence, and no reasonable suspicions.  They investigated Trump because they could.  They defied the law, ignored or perverted facts, and debased the integrity of a heretofore-respected law enforcement agency.
Why did these rogue officials commit such an outrageous act of malfeasance? In a word, vengeance.  Already incensed that Trump had defeated their preferred candidate, Hillary Clinton, they grew furious when the president fired Director James Comey on May 9, 2017. In reaction, they sought retribution. What better way to avenge Comey's firing than to launch a counterintelligence investigation of Trump under the false pretense that he committed treasonous acts for the benefit of the Kremlin and at the direction of President Vladimir Putin. Absent credible proof, information could be manipulated to frame Trump while a compliant media would gobble up the leaks and report the damaging charge. The election results could then be undone when the president was driven from office.
MARK PENN: FBI TRUMP-RUSSIA INVESTIGATION SHOWS DEEP STATE WAS WORSE THAN WE THOUGHT
To readers of my book, "The Russia Hoax: The Illicit Scheme To Clear Hillary Clinton And Frame Donald Trump,” this comes as no surprise.  As detailed therein, Comey and his faithful confederates at the Bureau twisted facts and contorted the law to absolve Clinton of all criminal acts she most certainly committed in the mishandling of her classified emails while Secretary of State.
On the same day Comey exonerated Clinton, his FBI was furtively meeting with the author of the fictitious anti-Trump "dossier" funded by Clinton and the Democrats.  Although nothing in the phony document was true or ever verified, the FBI used it as a pretext to commence and advance a malicious investigation into whether Trump "colluded" with Russia to steal the 2016 presidential election.  They also exploited the "dossier" as the basis to gain a warrant to spy on the Trump campaign, concealing the truth from the intelligence court and deceiving the judges.
Over the next ten months, the FBI failed to corroborate anything in the "dossier."  Bureau agents uncovered no evidence that Trump had somehow conspired or coordinated with Russia to influence the election. Then came the firing of Comey for just cause.  Deputy Attorney General Rod Rosenstein, Comey's direct boss, volunteered to author a memorandum recommending his termination for multiple acts of misconduct and serious violations of Justice Department and FBI rules in the Clinton case.  Six former Attorneys General and Deputy Attorneys General from different eras and both political parties endorsed his termination.  Comey was canned for reasons that were entirely merited and had nothing whatsoever to do with the Russia probe.  The president was constitutionally authorized to take such action, which Comey confirmed in a letter to his colleagues at the FBI.
As I noted in my book, "Almost immediately, demands for impeachment of President Trump were heard in the corridors of Congress.  The liberal media were crazed with excitement over the prospect that the president had obstructed justice in trying to block the Russian investigation.  In truth and in law, neither scenarios were remotely rational."

When the people we entrust to enforce the law become the lawbreakers, they must be held accountable.

Among those who were aggrieved over Comey's firing was his loyal lieutenant, Andrew McCabe, who became Acting FBI Director, as well as bureau lawyer Lisa Page and her paramour, Peter Strzok, a top counterintelligence agent.  Page and Strzok were intimately involved in the "collusion" investigation and were virulently opposed to the president both politically and personally, as evidence by their numerous anti-Trump text messages.
In the eight-day period after Comey's termination, top officials at the FBI decided to take action.  They would originate a counterintelligence investigation of Trump for being a foreign agent of Russia.  Critically, they had no evidence or even reasonable suspicion to support their operation.  They simply despised Trump and chose to misuse their positions of power in an illegal act of reprisal.
Once again, the FBI needed a pretext.They coalesced around the idea that Comey's firing might constitute obstruction of justice if it was intended to stop or impede the original Russian probe. In other words, the president must surely be a Russian agent if it can be shown that he wanted to halt the Russian probe.  According to the New York Times, Trump made two comments that served the FBI's improper purpose.  They are worth examining.
First, Trump wrote a letter to Comey thanking him for telling him three times that he was not under investigation. Comey later confirmed that he had, in fact, told the president he was not under investigation. Obviously, Trump wanted the American public to learn that he was not personally being investigated for Russian "collusion."  Yet, Comey refused to disclose this truth.  How this letter can, therefore, be viewed plausibly as obstruction of an investigation is baffling. Trump wanted to promote the truth, not conceal it.
Second, Trump gave an interview to NBC News two days after Comey was dismissed in which he made reference to the Russia investigation. How is this evidence of obstruction?  It is not.  As I explained in my book, "A rigorous reading of what Trump said confirms that his intent was not to interfere with or end the Russia investigation, but to place someone who was neutral and competent in charge."  In fact, Trump told NBC that he might want to lengthen the investigation to get to the bottom of any wrongdoing.  This is hardly evidence of a corrupt purpose to interfere in an investigation as the law of obstruction demands.
The FBI's illegitimate decision to begin an investigation of Trump as a Russian agent based on an obstruction premise was a false and fabricated excuse.  This is shown by the testimony of McCabe who appeared before the Senate Intelligence committee after Comey was fired.  He stated, "There has been no effort to impede our investigation to date."  Days later, Deputy Attorney General Rod Rosenstein told Congress, "There never has been...any political interference in any matter under my supervision in the Department of Justice."  Six days before he was fired, Comey told the Senate Judiciary Committee that no one had told him to stop something for a political reason.  "It's not happened in my experience," he said.
Not only did these key people involved in the Russia case affirm that the president never interfered or obstructed, there was no other evidence that Trump was working for the Russians that would have justified the FBI's punitive decision to launch its investigation. Both Comey and Page testified before House investigators that by the time the director was fired and Special Counsel Robert Mueller was appointed there was no hard evidence of "collusion."  The investigation had been running for ten months. Comey admitted, "In fact, when I was fired as director, I still didn't know whether there was anything to it."  Nevertheless, top officials at the FBI opened their investigation of Trump in May of 2017 without sufficient evidence and in direct violation of FBI and DOJ regulations.  They broke the law.  And they did it to depose Trump.
The FBI was not alone in its attempt to remove Trump from office.  According to another New York Times story, Rosenstein also sought retribution by proposing to secretly record the president in an attempt to gain some damaging information about him. He allegedly suggested that he and others wear hidden devices to record their conversations with Trump and discussed recruiting Cabinet members to remove him under the Constitution's 25th Amendment.  Three top FBI officials confirmed various elements of Rosenstein's efforts to mount the equivalent of a palace coup.  The Deputy Attorney General has consistently resisted requests by Congress to question him about his actions.
It is now undeniable that critical decisions made by senior FBI leadership were driven by political bias and personal animus, not sustainable facts or credible evidence. These powerful officials could not abide that Donald Trump had emerged, against their wishes, as the duly elected president of the United States.  They could not accept that he had unceremoniously shown Comey the door.  In an act of rank retaliation, they decided to abuse their positions of power to drive him from office.  They invented facts and ignored the law to subvert our system of justice and undermine the democratic process.  They compromised essential principles and betrayed the nation's trust.  Their conduct was, and is, unconscionable.


When William Barr takes office as our nation's next Attorney General, he must review their actions and present all evidence of wrongdoing to federal prosecutors and, if appropriate, a grand jury.  When the people we entrust to enforce the law become the lawbreakers, they must be held accountable.  No one is above the law.
Source>https://www.foxnews.com/opinion/gregg-jarrett-an-fbi-that-is-corrupt-and-dishonest-latest-reports-offer-only-more-proof
Posted by theodore miraldi at 11:29 AM