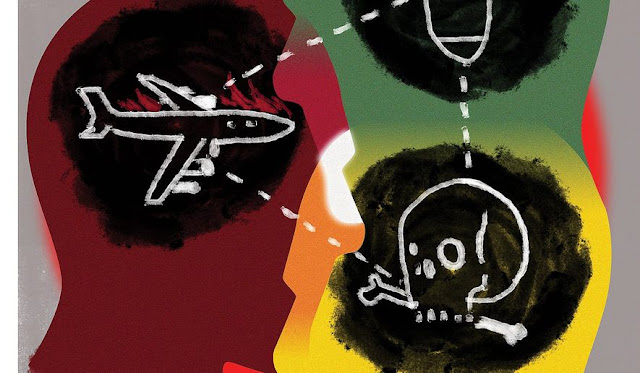 Illustration on the terrorist mind by Linas Garsys


ANALYSIS/OPINION:
In response to President Trump’s recent announcement that he was pulling troops out of Syria — and possibly Afghanistan — the Washington foreign policy establishment has responded with predictable hysteria.
Since at least 2005, Americans have been told by a parade of presidents and senior military officials that we cannot “abandon” Afghanistan and must continue to wage war there, otherwise it will again become source of terrorist attacks. In March 2009, for example, President Obama ordered the first of what would be two major troop surges that year. In explaining why the increase was necessary, he told the American public:
“Al Qaeda and its allies — the terrorists who planned and supported the 9/11 attacks — are in Pakistan and Afghanistan And if the Afghan government falls to the Taliban — or allows al Qaeda to go unchallenged — that country will again be a base for terrorists who want to kill as many of our people as they possibly can.”
As much as U.S. leaders have repeated versions of Mr. Obama’s sentiment since 2001, the fact is U.S. forces do not need to hold Afghanistan or any other foreign territory to remain safe from future terror attacks. Washington embraced that flawed premise after the Sept. 11, 2001, attacks. Since al Qaeda had organized amid the chaos of Afghanistan’s civil war, it seemed natural to assume that overcoming the threat of repetition required ending that war and others like it, and creating local governments capable of policing their territory to deny terrorists safe haven.
But a careful analysis of how the 9/11 plot came about shows the flaws in that thinking. The authoritative rendering of how the Sept. 11 attacks were hatched, prepared and carried out is the 9/11 Commission Report published in 2004. As the report explains, Afghanistan was little more than incidental to the attack.
It was conceived by Khalid Sheikh Mohammed (KSM), beginning as far back as 1993 while he was living in Qatar. KSM initially met with Ramzi Yousef in the Philippines to begin his plot and continued to travel around the world to jihadist hotspots, conspiring with other terrorists and refining his plan. In 1995 alone, KSM visited with terrorist comrades in Sudan, Yemen, Malaysia and Brazil.
Meanwhile, Osama bin Laden was busy working to form and strengthen al Qaeda. By 1994, Saudi Arabia stripped him of his citizenship and bin Laden went to Sudan in exile. In mid-1996, bin Laden moved his operations from Sudan to Afghanistan.
KSM, after refining his planning (for what would later become the 9/11 attacks) between 1993 and 1996, arranged a meeting with bin Laden in the Afghan mountain fortress of Tora Bora shortly after bin Laden completed his move from Sudan.
At this meeting, KSM pitched the idea of using hijacked planes to attack targets in the United States. Bin Laden listened, but did not agree to support the idea at that time.
Following the meeting, KSM, according to the report, continued to work on his plan and “journeyed onward to India, Indonesia, and Malaysia, where he met with [terrorist] Jemaah Islamiah’s Hambali In Iran, KSM rejoined his family and arranged to move them to Karachi; he claims to have relocated by January 1997. After settling his family in Karachi, KSM tried to join the mujahid leader Ibn al Khattab in Chechnya.”
Bin Laden finally “decided to give KSM the green light for the 9/11 operation sometime in late 1998 or early 1999” and KSM moved to Afghanistan. At this point, the report stated, in “late 1998 to early 1999, planning for the 9/11 operation began in earnest.”
These key facts are crucial in understanding how the 9/11 attacks were actually formed — and in understanding how we can prevent or mitigate against future such attacks.
The 9/11 attack was not “hatched” in Afghanistan. KSM, the mastermind of the plot, formed his concept between the years 1993-98 while living and traveling in Sudan, Yemen, Malaysia, Brazil, India, Iran, Indonesia, Malaysia and Pakistan. It wasn’t until 1999 that bin Laden approved the plan and KSM returned to Afghanistan to continue planning.
The bottom line is that the most crucial terrain in which the 9/11 plot was hatched wasn’t any country, but in the twisted minds of brutal men. No amount of combat troops on the ground in Afghanistan, therefore, is going to prevent a future attack.
The easiest way for the Trump administration to heighten America’s safety is to redeploy the troops from Afghanistan, Syria and Iraq, while strengthening our global intelligence, surveillance and reconnaissance capabilities — which has been primarily responsible for keeping our homeland safe since 9/11.
Add to that continued — and maybe expanded — cooperation between all federal and local law enforcement agencies plus active engagement with intelligence services of friendly countries, and our ability to defend against terror attacks grows even higher.


Once we realize that keeping combat troops tied to small parts of some countries does not keep us safe here, it becomes clear why it is in the interest of all Americans to redeploy our troops. Focusing efforts on actions that are actually responsible for keeping us safe is logical. Obsessively defending the failed interventionist-status quo on the other hand, is illogical.
Source>https://www.washingtontimes.com/news/2018/dec/31/terror-plots-are-hatched-in-the-minds-of-terrorist/