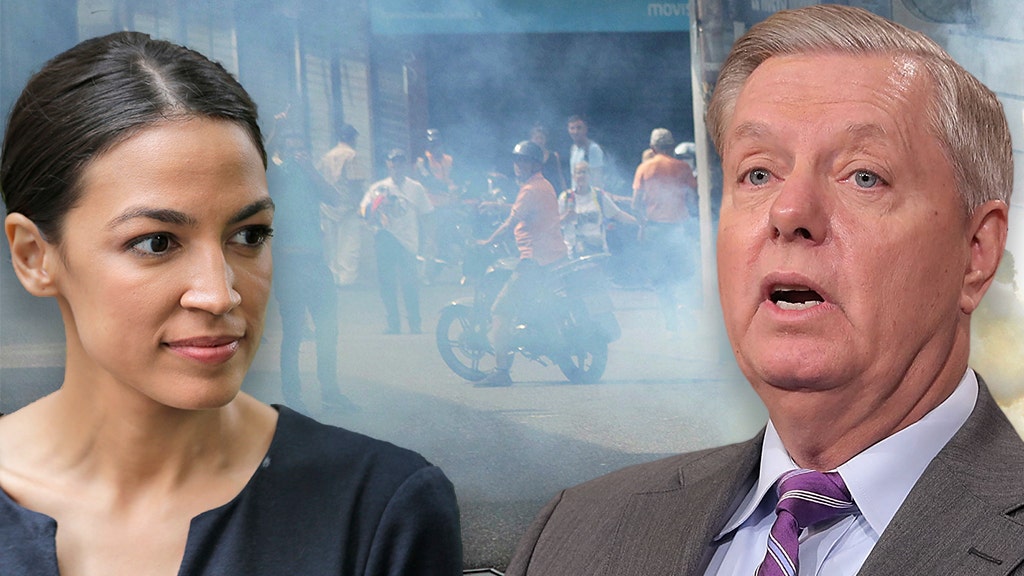 
Sen. Lindsey Graham, R-S.C., zinged Rep. Alexandria Ocasio-Cortez, D-N.Y., on Thursday for claiming climate change will end the world in 12 years -- and accused her of wanting to make Americans live as “Venezuelan socialists.”
“Let’s bury the hatchet and enjoy the next 12 years because they are going to be our last, right?” he tweeted.
Graham was responding to a tweet Ocasio-Cortez sent that hit Graham for ignoring President Trump’s various controversies and statements, while criticizing Democrats for refusing to allow Trump to make his State of the Union address in the House until the partial government shutdown ends.
But Graham instead took issue with comments she made about climate change on Monday.
“Millennials and people, you know, Gen Z and all these folks that will come after us are looking up and we’re like: ‘The world is gonna end in 12 years if we don’t address climate change and your biggest issue is how are we gonna pay for it?'" Ocasio-Cortez said at an event commemorating Martin Luther King Jr. Day.
GOP ALLIES GRAHAM, MCCARTHY DEFEND TRUMP AGAINST PELOSI IN SOTU BATTLE
Graham picked up support from parts of the Trump-supporting right for his passionate defense of now-Justice Brett Kavanaugh during his confirmation hearing against accusations of sexual assault, pushing back against those opposing Kavanaugh’s nomination in the hallways of Congress.
“You’ve humiliated this guy enough and there seems to be no bottom for some of you,” he said to one anti-Kavanaugh protester. “Why don’t we dunk him in water and see if he floats.”
Graham's own "dunks" soon led to him getting nicknames such as  “Lindsey Graham 2.0” from conservative supporters. Ocasio-Cortez, meanwhile, has taken Congress by storm and has challenged Republicans, Democrats and the media on social media in the face of criticism she has faced for her proposals.
On Thursday, Graham wasn’t done, and accused Ocasio-Cortez -- who has embraced the label of “democratic socialist” -- of wanting to make Americans spend their remaining years living as Venezuelan socialists. The Trump administration on Wednesday officially recognized opposition leader Juan Guaido as the Venezuela's interim president to replace socialist President Nicolas Maduro.
“Even worse news, @AOC and her new socialist colleagues seem hell-bent on making sure that our last 12 years will be spent as Venezuelan socialists, not Americans,” he said.
Graham also suggested that it was the agenda of Ocasio-Cortez that would be on the ballot in the 2020 elections, and asked whether it would be rejected by Americans.
“Question: Is it possible Rep. Ocasio-Cortez could be wrong about the demise of the planet in 12 years and the American people reject her socialist agenda in 2020?” he asked“Stay tuned!” he added.
Source>https://www.foxnews.com/politics/graham-zings-ocasio-cortez-says-shes-hell-bent-on-making-americans-live-as-venezuelan-socialists
Posted by theodore miraldi at 4:25 PM