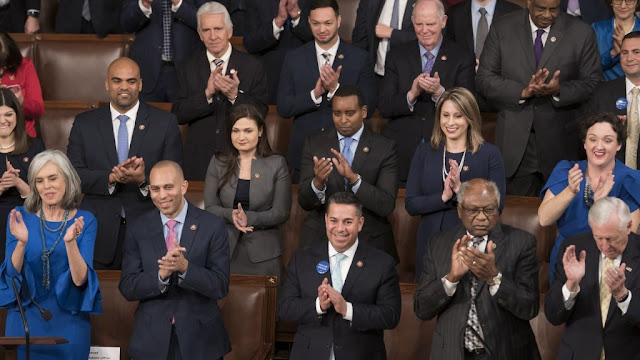 With their party in control, several House Democrats forged ahead this week with legislation aimed at changing future presidential elections or curtailing the commander in chief’s power.

Articles of impeachment and a move to end the ongoing partial government shutdown – albeit, without President Trump’s explicit demand for funding for a border wall – were also brought up as the 116th Congress convened for the first time.

Rep. Steve Cohen, D-Tenn., introduced a pair of constitutional amendments that would eliminate the Electoral College as well as strictly prohibiting a president from pardoning himself, family members or associates.
Trump secured the 2016 election by winning the Electoral College with 304 votes to Democrat Hillary Clinton’s 232. But Clinton beat Trump by nearly 3 million in the popular vote. Especially since then, many Democrats have vociferously opposed the system.
Cohen, in particular, called the Electoral College “distorting” and “outdated” in a statement regarding his proposals.
“Americans expect and deserve the winner of the popular vote to win office,” he said. “More than a century ago, we amended our Constitution to provide for the direct election of U.S. Senators. It is past time to directly elect our President and Vice President.”

Additionally, Cohen moved to prohibit Trump and any future president from issuing pardons to “themselves, their families, their administration or campaign staff.” Cohen previously suggested Donald Trump Jr., the president’s oldest son, and Jared Kushner, his son-in-law, could be indicted as special counsel Robert Muellercontinues his probe into Russian interference in the 2016 election and potential collusion with Trump’s campaign.
Amid the investigation, the issue over whether Trump could – or even would – pardon himself has arisen.
Trump said in a June 2018 tweet that he has “the absolute right to pardon” himself, but legal scholars have remained undecided, even calling the debate a “favorite parlor game” among experts.

Among one of the first bills Democrats will consider is an effort to make it easier for people to vote while tightening election security. The move would also require presidents to disclose their tax returns.
The bill would create automatic national voter registration while expanding access to early and online registration. Additionally, it would beef up federal support for state voter systems, including paper ballots to prevent fraud and restore voting rights for former prisoners. It would also restore protections included in the 1965 Voting Rights Act and guard against efforts by state officials who wish to purge voting rolls.
Social media platforms would be required to disclose who paid for online ads – similar to rules other media have to adhere to – and would mandate political groups disclose donors.
Members of Congress would also be prevented from serving on corporate boards and could not use taxpayer dollars in settling employment discrimination cases.

On the House Democrats' first day in the majority, the government was in its 13th day of a partial government shutdown. Democrats passed a plan to re-open the government – but it didn’t include funding for Trump’s oft-promised border wall.
“We’re not doing a wall. Does anyone have any doubt that we’re not doing a wall?” House Speaker Nancy Pelosi asked reporters.
The House's plan, voted on largely along party lines, is unlikely to go anywhere. Trump has demanded billions of dollars to build his wall along the U.S. border with Mexico – which Democrats have refused.

California Rep. Brad Sherman hit the ground running with impeachment plans as he reintroduced articles he last filed in 2017 – when Republicans had control of the House. He told the Los Angeles Times, “Every day Donald Trump shows that leaving the White House would be good for our country.”
Ahead of taking the House Speaker’s gavel for the second time in her career, Pelosi refused to rule out the possibility of launching impeachment proceedings entirely. She told NBC News she wants to “see what comes” from Mueller’s probe, adding Congress "shouldn't be impeaching for a political reason, and we shouldn't avoid impeachment for a political reason.”
RASHIDA TLAIB FACES BACKLASH FOR PROFANITY-LACED TRUMP IMPEACHMENT VOW
New Rep. Rashida Tlaib, D-Mich., also made headlines Thursday with her more obscene calls for Trump’s impeachment. Speaking to a crowd of supporters after she was sworn in, Tlaib said, “When your son looks at you and says, ‘Momma, look you won. Bullies don’t win.’ And I said, ‘Baby, they don’t because we’re gonna go in there and we’re gonna impeach the mother****er.”
After making headlines for her remark, Tlaib tweeted that she would “always speak truth to power” with the hashtag, #UnapologeticallyMe.
Tlaib had also laid out her argument for Trump’s impeachment in an op-ed for the Detroit Free Press.
The Associated Press contributed to this report.
Source>https://www.foxnews.com/politics/house-democrats-move-to-eliminate-electoral-college-limit-presidential-pardon-power-and-more-in-first-days-back
Posted by theodore miraldi at 12:42 PM