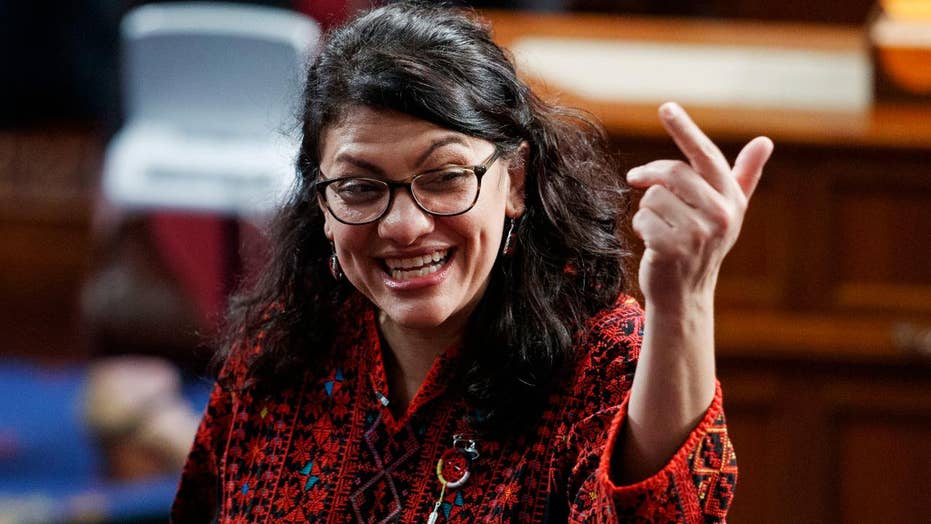 
Less than a week after issuing a profanity-infused call to impeach President Trump on her first day in office, Michigan Democratic Rep. Rashida Tlaib is under fire from Republican politicians and commentators for openly posting what they call an anti-Semitic dog whistle on Twitter.
Top Republicans in the Senate are also alleging that Democratic leaders are hoping to hide the fact that Tlaib is just one of many new Democratic politicians in Congress who harbor deeply anti-Israel views.
Tlaib, responding to a post by Vermont Independent Sen. Bernie Sanders on Monday, suggested that Senate Republicans were more loyal to Israel than the U.S., amid a report that GOP leaders were planning to introduce a bill that would punish companies that participate in the so-called "Boycott, Divestment, and Sanctions" (BDS) global movement against Israel.  BDS proponents seek to pressure Israel through economic and other means -- often, until Israel ceases to exist in its current form.
"They forgot what country they represent," Tlaib, a Palestinian-American who made history last week by becoming one of the first two Muslim women to ever serve in Congress, wrote.

Advice from Israel: Build the wall

Former mayor of Shiloh, Israel David Rubin, weighs in on the comparisons between the U.S. border wall and Israel's wall.
"This is the U.S. where boycotting is a right & part of our historical fight for freedom & equality. Maybe a refresher on our U.S. Constitution is in order, then get back to opening up our government instead of taking our rights away," she added.
Florida Republican Sen. Marco Rubio, one of the Republican senators to introduce the anti-BDS bill, immediately called Tlaib's post an "anti-Semitic line" that perpetuates a longstanding "dual loyalty" conspiracy that holds that Israel effectively controls Washington politicians.
The accusation that Jewish politicians could be vulnerable to having "dual loyalties" has been made for centuries in various contexts, and has been seen widely as a religious-based attack intent on undermining their leadership.
The posts by Sanders and Tlaib specifically criticized Senate Republicans for planning to introduce the "Strengthening America’s Security in the Middle East Act of 2019," a pro-Israel series of bills, instead of legislation to end the ongoing partial federal government shutdown, which entered its 17th day on Monday.
The package of legislation includes provisions reauthorizing the United States-Jordan Defense Cooperation Act of 2015, and providing for new sanctions against Bashar al-Assad's regime in Syria.
One of the bills in the package, the Rubio-Manchin Combating BDS Act of 2018, also would "increase protections for state and local governments in the United States that decide to divest from, prohibit investment in, and restrict contracting with companies knowingly engaged in commerce-related or investment-related BDS activity targeting Israel," according to Senate Republicans.
Critics have charged that the bill amounts to an unconstitutional First Amendment violation, because it involves an impermissible government punishment of speech based on its content. (Similar laws restricting boycotts of Israel have been ruled unconstitutional.)
Rubio wrote that the real reason Democrats were criticizing Republicans for introducing the pro-Israel bill is that "a significant # of Senate Democrats now support #BDS & Dem leaders want to avoid a floor vote that reveals that."
In addition to Sanders, who caucuses with Democrats, Maryland Democratic Sens. Ben Cardin and Chris Van Hollen have called on Senate Majority Leader Mitch McConnell, R-Ky., to resolve the shutdown before pressing on with a vote on the pro-Israel bill.
READ JUDGE JEANINE PIRRO'S MESSAGE TO TLAIB
"The shutdown is not the reason Senate Democrats don’t want to move to Middle East Security Bill," Rubio wrote, noting that "a huge argument" had broken out last week over the issue.
Hours later, Tlaib responded on Twitter: "Sen. Rubio, it's clear my earlier tweet was critical of U.S. Senators like yourself, who are seeking to strip Americans of their Constitutional right to free speech," she wrote. "The American people need Trump and Republican Senators to focus on ending the shutdown instead of inventing controversy to distract from your inaction."
Nevertheless, there are visible signs that Tlaib's approach may be becoming more mainstream among the Democratic Party's progressive wing. The other Muslim woman to make history by winning her election with Tlaib last year, Minnesota Democratic Rep. Illhan Omar, tweeted in 2012 that "Israel has hypnotized the world." Omar added: "May Allah awaken the peoople and help them see the evil doings of Israel."
Other commentators similarly sounded the alarm about Tlaib's comments, and noted that the media reaction was conspicuously minimal. (Trump, late last year, was lambasted repeatedly in the media for allegedly issuing anti-Semitic "dog whistles" because of his criticisms of liberal billionaire George Soros.)
"Oddly, many of those who hear dog whistles for a living aren't exactly perking up at Tlaib accusing her critics of dual loyalty," Washington Free Beacon editor Alex Griswold wrote on Twitter. "Nor, for that matter, did they have much to say about Omar's 'Israel has hypnotized the world' tweet."
Conservative commentator Ben Shapiro went further, alleging in an op-ed that "Democrats have soured on Israel and warmed to anti-Semitism."

Rep. Steve Scalise shut down a Twitter debate on taxes with Democrat Rep. Alexandria Ocasio-Cortez after at least three commenters made references to the 2017 Virginia baseball practice shooting. The House Republican reacts on 'Fox & Friends.'
"The truth is that the Democratic Party has been flirting with, and in some cases openly embracing, anti-Semitism for years," Shapiro wrote. "That’s why top members of the Democratic Party continue to kowtow to open anti-Semites like Linda Sarsour and Louis Farrakhan; it’s why the Democrats booed Jerusalem in the 2012 Democratic National Committee platform; it’s why the Obama administration routinely played public relations arm for the Iranian government; it’s why no major Democrat will go on record condemning Tlaib or Ilhan Omar."
MEDIA SPREAD FALSE NARRATIVE THAT CONSERVATIVES WERE OFFENDED BY OCASIO-CORTEZ DANCING
Tlaib was photographed last week wearing Palestinian robes with Sarsour, a proponent of Louis Farrakhan and the Nation of Islam. Farrakhan has compared Jews to termites and praised Hitler.
Late last year, Tlaib publicly bucked Democratic Party leaders by openly endorsing a one-state solution in the Middle East, and calling for Israeli withdrawals and reduced military aid to Israel.
“It has to be one state," Tlaib told In These Times magazine. "Separate but equal does not work. I’m only 42 years old, but my teachers were of that generation that marched with Martin Luther King. This whole idea of a two-state solution, it doesn’t work.”
She added, referring to Israel: "Americans should not be aiding any country that doesn’t support human rights. I’ve been very clear. I will not support racist countries that pick and choose who gets access to justice.”
Tlaib's comments on Israel threatened to create new headaches for Democrats already wrangling to control the party's fresh new progressive wing. During a progressive MoveOn.org reception Thursday night, Tlaib drew widespread condemnation by calling for Trump's impeachment using vulgar language as her son looked on.
"People love you and you win," Tlaib shouted. "And when your son looks at you and says, 'Momma, look you won. Bullies don't win.' And I said, 'Baby, they don't, because we’re gonna go in there and we’re gonna impeach the mother****er.'”
Rep. Rashida Tlaib (D-MI) poses with Speaker of the House Nancy Pelosi (D-CA) for a ceremonial swearing-in picture on Capitol Hill in Washington, U.S., January 3, 2019. REUTERS/Joshua Roberts - RC1717918ED0
The next day, Tlaib stood by her comments but repeatedly attempted to avoid reporters asking her to clarify her remarks.
Speaking at the White House, Trump called Tlaib's comments "disgraceful" and said she had "dishonored herself and dishonored her family." But Democrats offered a muted reaction, with some offering support for Tlaib.
House Judiciary Chairman Jerry Nadler, speaking on CNN, remarked on Friday: “I don't like really like that kind of language. But more to the point, I disagree with what she said. It is too early to talk about that intelligently. We have to follow the facts." The Judiciary committee would oversee any impeachment proceedings against Trump.
But New York Democratic Rep. Alexandria Ocasio-Cortez tweeted that criticism of Tlaib' remarks was "Republican hypocrisy at its finest" given Trump's rhetoric, adding that "GOP lost entitlement to policing women’s behavior a long time ago."
Speaker of the House Nancy Pelosi, sitting on an MSNBC panel, largely agreed.
"I probably have a generational reaction to it," Pelosi said. "But in any event, I'm not in the censorship business. I don't like that language, I wouldn't use that language. I don’t … establish any language standards for my colleagues, but I don’t think it’s anything worse than what the president has said."
She added, "Generationally, that would not be language I would use, but nonetheless, I don’t think we should make a big deal of it."
Tlaib's office did not return Fox News' request for comment.
Source>https://www.foxnews.com/politics/rashida-tlaib-accused-of-anti-semitic-slur-days-after-profane-anti-trump-tirade
Posted by theodore miraldi at 8:15 AM