The Outrageous ASSAULT On CHRISTIAN KNIGHTS Of COLUMBUS

KAMALA HARRIS AND THE RELIGIOUS TEST OF THE 'NEW LIBERALSM'
Considering the World is in the Midst of Jihadists Murdering Innocent Men, Women and Children in the name of Religion, why are some in the Democratic party only concerned with a Religion based Forgiveness and Inclusion? Might EVIL be the answer?
...tmiraldi 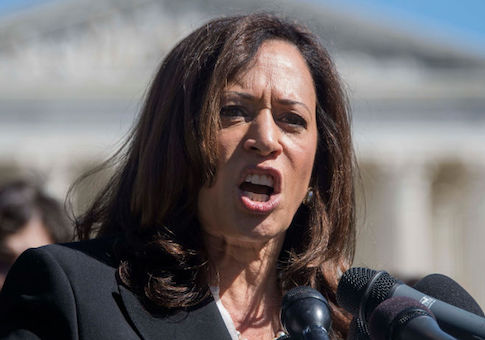 
Kamala Harris is set to announce her candidacy for president sometime around Martin Luther King Jr. Day. What sort of chief executive would she be? Well, here's your first clue: On December 5, Harris posed a series of written questions to Brian Buescher, President Trump's nominee for District Court in Nebraska. The third question reads as follows:

Harris wasn't finished. Follow-ups included "Were you aware that the Knights of Columbus opposed marriage equality when you joined the organization?" and "Have you ever, in any way, assisted with or contributed to advocacy against women's reproductive rights?"
Buescher, a Nebraska native and graduate of the Georgetown Law Center, replied that he joined the Knights when he was 18 years old; that his involvement includes charitable work; and that his job as a judge is to apply the law regardless of his personal convictions. Strong answers. That he had to offer them is a disgrace.
What Kamala Harris is suggesting is that membership in a 2 million-strong, 136-year-old Catholic social organization disqualifies an individual from the federal bench. She was joined in this line of questioning by Senator Mazie Hirono of Hawaii. The even worse news is that plenty of Senate Democrats agree with them. They've adopted a strategy of interrogating President Trump's judicial nominees about Catholic beliefs and associations. It began in September 2017 when Dianne Feinstein told Amy Coney Barrett, now confirmed to the Seventh Circuit, "The dogma lives loudly within you, and that's a concern."
My concern is the anti-Catholic sentiment manifest in the Democratic Party. Last March, Feinstein demanded to know if Michael Scudder, now confirmed to the Seventh Circuit, worked with his parish "to establish a residential crisis pregnancy center." Last May, Senator Sheldon Whitehouse of Rhode Island asked Peter J. Phipps, now confirmed as a district court judge, about the Knights. Last October, Feinstein, Harris, and three other Democrats wanted to know about the relationship between Fourth Circuit nominee Allison Jones Rushing and the Alliance Defending Freedom, a Christian nonprofit that supports religious liberty. Last November, Feinstein asked Third Circuit nominee Paul Matey, "If confirmed, will you recuse yourself from all cases in which the Knights of Columbus have taken a position?"
Nor is it only Catholics who are subject to this religious test. The Democrats are ecumenical: Baptists and Episcopalians are also under scrutiny. In June 2017, Bernie Sanders clashed with Russell Vought, now acting director of the Office of Management and Budget, over a blog post Vought had written regarding Islam that several Muslim groups considered Islamophobic. "I'm a Christian, and I believe in a Christian set of principles based on my faith," Vought said. By the end of the exchange, Sanders said, "I would simply say, Mr. Chairman, that this nominee is really not someone who is what this country is supposed to be about." Vought is an elder in his church, married, and has two daughters.
The following month, in questions to Trevor McFadden, now confirmed to D.C. district court, Whitehouse singled out McFadden's church, Falls Church Anglican, for its opposition to same-sex marriage. Whitehouse asked if McFadden agreed with statements made by his pastor. "It would be improper for me to state my personal opinions," McFadden responded in writing. "If I am confirmed as a judge, I will faithfully apply the applicable Supreme Court and D.C. Circuit precedents, including Obergefell v. Hodges." That wasn't enough for Whitehouse. What he was after was confession, repudiation, and repentance.
Commenting on the back-and-forth between Whitehouse and McFadden, Ramesh Ponnuru observed, "To see what's wrong with this line of questioning, it might be helpful for liberals to flip this scenario." What if a religious progressive were up for a nomination, and a Republican senator asked if his church's position in favor of same-sex marriage or abortion rights or transgender accommodations would affect his decisions? Wouldn't the left be outraged? Probably yes, given the selectivity with which partisans apply standards of constitutional and moral probity these days. Then again, I wonder whether Democrats would actually protest all that much, since for them ideological tests matter far more than religious ones.
Let's contemplate another hypothetical: What if a Republican suggested that a judge's identity skewed his legal reasoning? Guess what, Democrats accused President Trump of doing exactly that during the 2016 campaign—and they were furious. Now they are equally angry that the president has the temerity to nominate individuals connected to—I can hardly write the words, they are so scandalous—crisis pregnancy centers, legal nonprofits, and bake sales. How awful.
So committed are these Senate Democrats to the doctrines of social liberalism that they are prepared to ignore the plain text of Article Six, Section Three, of the Constitution: "[N]o religious Test shall ever be required as a Qualification to any Office or Public Trust under the United States." Or is this another part of America's founding document that "evolving standards of decency" compel us to shunt aside?
More than religious freedom is under attack in the controversy over the Knights. So is the freedom of association. In the midst of a social crisis that involves drug and alcohol abuse, suicide, depression, and loneliness, progressive Democrats seek to delegitimize the very organizations that promote community, connection, charity, and meaning.
When Alexis de Tocqueville visited America, he was struck not only by the religiosity of our people. He also noticed their penchant for association. Here was true diversity, a genuine pluralism of belief and practice. The ‘new liberalism‘ that is said to be ascendant in the Democratic Party undermines these twin pillars of American exceptionalism—religion and civil society—to advance the (quite brittle) cultural consensus that reigns in the megalopolis.
No longer is the debate over Christianity in the public square. It is over Christians in the public square. And this is an argument in which people of every faith have a stake in the outcome.
Source>https://freebeacon.com/columns/the-outrageous-assault-on-the-knights-of-columbus/
Posted by theodore miraldi at 1:51 PM