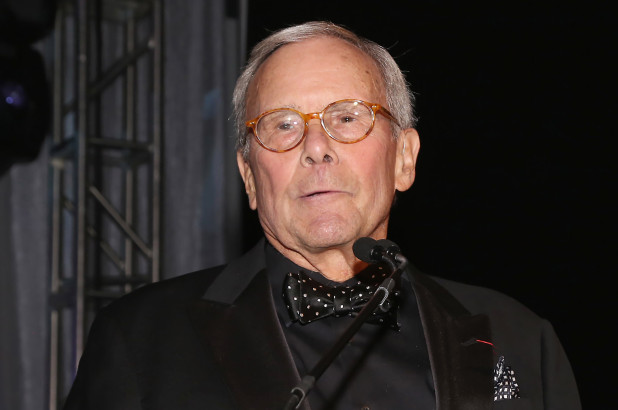 
Tom Brokaw has come under fire for comments he made about Hispanics during a “Meet the Press” appearance on Sunday.
The legendary NBC News anchor — who was accused of sexual harassment last year by three different women — had been on the panel discussing immigration and what could help bring Americans together on the subject.
“A lot of this we don’t want to talk about but the fact is on the Republican side, a lot of people see the rise of an extraordinary important new constituency in American politics — Hispanics, who will come here and all be Democrats,” Brokaw said. “I hear when I push people a little harder, ‘I don’t know whether I want brown grand babies.’ That’s also a part of it. It’s the intermarriage that’s going on and the cultures that are conflicting with each other.”
Brokaw said he also happens to believe that “the Hispanics should work harder at assimilation.”
“That’s one of the things that I’ve been saying for a long time, you know, that they ought not to be just codified in their communities but make sure that all of their kids are learning to speak English and that they feel comfortable in the communities,” Brokaw said. “And that’s going to take outreach on both sides, frankly.”
PBS correspondent Yamiche Alcindor, who was also on the “Meet the Press” panel, condemned Brokaw’s comments once the segment was finished — as did countless social media users.
“I would just say that we also need to adjust what we think of as America,” Alcindor said. “You’re talking about assimilation. I grew up in Miami, where people speak Spanish, but their kids speak English. And the idea that we think Americans can only speak English, as if Spanish and other languages wasn’t always part of America, is, in some ways, troubling.”
Brokaw took to Twitter on Sunday night to do damage control after getting blasted as a “xenophobe” and “racist” throughout the day.
“I feel terrible a part of my comments on Hispanics offended some members of that proud culture,” he tweeted. “From my days reporting on cesar chavez to documenting the many contributions of hispanics in all parts of our culture I’ve worked hard to knock down false stereo types. In my final comment in Meet i said ALL sides hv to work harder at finding common ground – which i strongly believe dialogue not division.”
Social media users, however, weren’t too accepting.
“You misspelled, ‘I apologize for my ignorant and demeaning glib generalization,'” tweeted @pourmecoffee.
“Also we aren’t all Hispanics,” another person said. “‘That proud culture’? It’s not just one culture, you definitely need some history classes because you’re talking about many people from many places/countries and diverse backgrounds.”
Many were pointing out how Brokaw didn’t initially apologize.
“This isn’t an apology,” tweeted one user. “You owe the Hispanic community an apology.”
Brokaw eventually said he was “sorry” in a second series of tweets hours later — claiming his Twitter account had “failed” him the first time.
“I am sorry, truly sorry, my comments were offensive to many,” Brokaw said. “The great enduring american tradition of diversity is to be celebrated and cherished. yamiche, thank u for your comments. let’s go forward together. Finally, I am sorry — I never intended to disparage any segment of our rich, diverse society which defines who we are.”
Brokaw and NBC did not immediately respond for comment Sunday.
Source>https://nypost.com/2019/01/27/tom-brokaw-rants-about-not-wanting-brown-grand-babies/
Posted by theodore miraldi at 8:02 AM